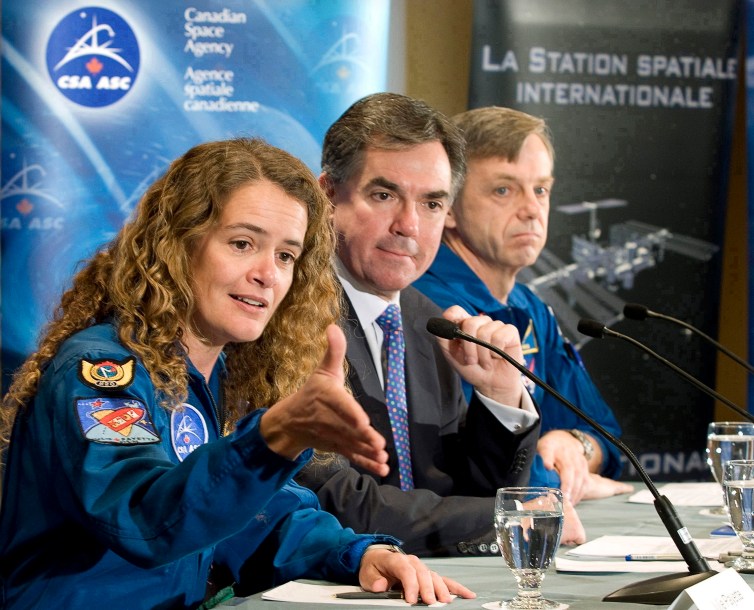 Canadian astronaut Julie Payette is in space, on a rendezvous mission with the international space station, and she brought with her a piece of the Canadian Olympic Team.

Months before Payette blasted off on space shuttle Endeavour, the Canadian Olympic Committee presented her with an Olympic shirt signed by many of the nation’s athletes set to compete at the 2010 Olympic Winter Games. (For full list of items with Payette, see.)

Payette wished to bring an Olympic item to space to recognize the drive and commitment of Canadian athletes who will compete against the world next February in Vancouver and Whistler. She will wear the shirt at some point during the mission, and a photo will be taken of her. This special shirt and photo will generate Olympic spirit at the residence of the Canadian team in Vancouver during the Games. Afterward, the items will be flown to Calgary for a permanent display in the Canadian Olympic Hall of Fame and Museum.

All astronauts can bring a certain number of objects with them from organizations important to them, as well as significant articles. The Olympic shirt goes with her alongside a 10-item “Official Flying Kit” that includes a rough diamond mined in Yellowknife (the first gem in space) and drops of water from each of the Great Lakes and three oceans that border Canada, and four other “unofficial” items, one of which is a signed hockey jersey by Maurice Richard.

The Olympic angle is of particular importance to Payette, as she explained in a pre-flight interview with NASA. She was 13 years old in 1976 when the Olympic Games came to her hometown of Montreal. Swept up in Olympic spirit, her parents bought tickets to a handful of sports including athletics, water polo and judo. During off-times, they would mill around the Olympic stadium to soak in the atmosphere. It was then that Payette saw the multitude of ethnicities and languages congregated there, an experience she called “extraordinary.”

“The marathon went by my house, a couple streets down and me and my dad, that morning, we went and looked at the runners pass by,” she told NASA. “It was raining, that morning, and that’s when I discovered there was a world out there … very intriguing, fascinating and I wanted to be part of that world.”

To this day, she credits the Olympic Games with stoking her interests in the global community, a world that she is currently looking down on from an acutely unique vantage point.

As a young gymnast, Alysha Newman aspired to represent Canada, however an injury forced her to take a year away…