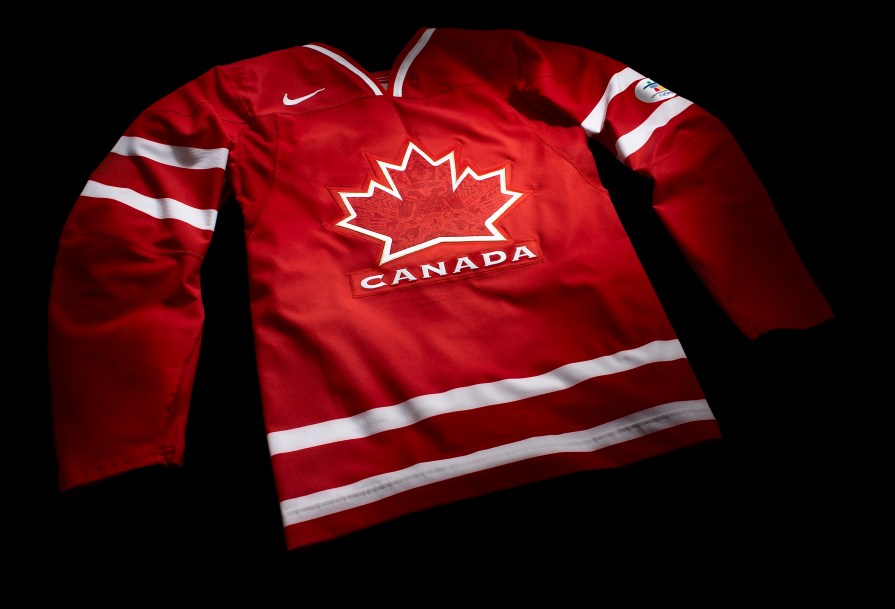 Hockey Canada unveiled Team Canada’s 2010 hockey jersey on Monday, the result of a partnership with the Vancouver Organizing Committee for the 2010 Olympic and Paralympic Winter Games (VANOC), Nike Canada Corp., the Canadian Olympic Committee and the Canadian Paralympic Committee. These Hockey Canada jerseys by Nike will be worn exclusively at the 2010 Olympic and Paralympic Games in Vancouver by the men’s, women’s and sledge hockey teams representing Canada.

“Hockey Canada would like to thank all of its partners that have helped make these special 2010 Winter Games jerseys a reality,” said Bob Nicholson, Hockey Canada’s president and CEO. “These two jerseys will complement our traditional jersey, while respecting International Olympic Committee guidelines for the 2010 Olympic Winter Games.”

“Working with our partners at Nike, we have developed a design that, while not a major departure from our current jersey, incorporates imagery in a different and meaningful way,” added Scott Smith, Hockey Canada’s chief operating officer. “We believe the jerseys honour the game of hockey and also celebrate our rich Canadian history and culture. Our teams and fans across the country will be proud to wear them during this special moment in 2010.”

“This Vancouver 2010 jersey will become part of our nation’s history and it’s very exciting to see it come to life through partnership and the vision of Nike and a talented Musqueam artist,” said John Furlong, VANOC’s chief executive officer. “We hope Canadians will embrace this sweater as the anticipation builds for Canadian team fans across the country and around the world as Team Canada goes for gold on home ice in just a few short months.”

“These jerseys bear a uniquely exciting Canadian look in keeping with the distinctly Canadian character. The appearance of these jerseys will ignite our nation’s pride each time some of Canada’s most recognizable athletes take to the ice to represent their country and the Canadian Olympic team,” said Michael Chambers, president of the Canadian Olympic Committee. “We know all Canadians will be proud of the athletes wearing these memorable Olympic team jerseys, and that those same fans will wear them in demonstrating their support for our Olympic hockey players.”

Hockey Canada’s 2010 Olympic Winter Games jersey features the Vancouver 2010 and Canadian Olympic Committee marks. There will be two versions of the jersey: one in red and a second in white that the teams will wear in competition at the Olympics.

“Nike is excited to support Hockey Canada, the COC, CPC and VANOC during this once in a lifetime moment in Canadian hockey history,” says Christopher Rigney, head of sports marketing for Nike Canada. “It’s a testament to the essential role hockey plays in our country’s culture and heritage. We believe it celebrates the past and but also looks to the future.”

Team Canada 2010 jerseys, which come in red or white (suggested retail price $135), will be available later today online and in over 2,000 retail outlets across CAnada, including but not limited to SportChek locations, Nike stores, Hudson’s Bay Company stores, Olympic Stores in Vancouver, Whistler and the Vancouver International Airport, and online at . They will also be sold at the Olympic Superstore at the Bay Downtown Vancouver and hockey venue concession stands operated during the Games by VANOC’s merchandise concessionaire, XP Canada ULC. Replica jerseys will be identical to the authentic jerseys, with the exception of the presence of the Hockey Canada mark on the left sleeve.

For a photo gallery of past Canadian Olympic hockey jerseys, visit www.olympic.ca/en/photos/tag/olympic-hockey-jerseys .