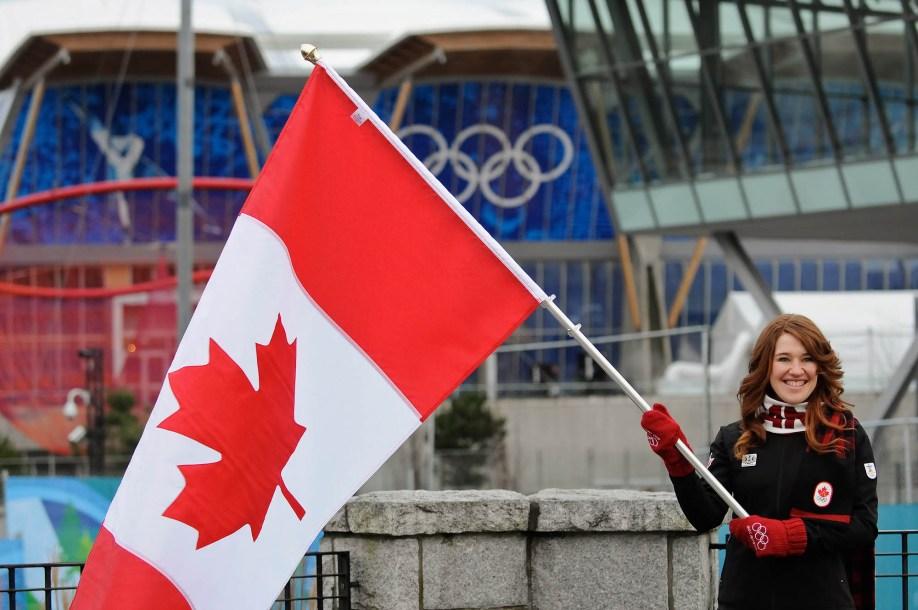 The Canadian Olympic Committee (COC) today announced that five-time Olympic medallist Clara Hughes has been named Canada’s flag bearer for the Vancouver 2010 Olympic Winter Games. The announcement came as the COC also officially named the 206 athletes who will compete for Canada at “home” in Vancouver, Whistler and Richmond during the XXI Olympic Winter Games that begin on February 12.

The full 2010 Canadian Olympic Team can be found here: http://media.olympic.ca/files/gamedocs/2010_Canadian_Olympic_Team.pdf.

“This is without a doubt the greatest honour of my sporting life,” said Hughes. “Leading the Team into BC Place is something I look forward to because of the world class Canadian athletes beside me, and the inspiring stories behind each one of them. These Games will have a profound impact on every Canadian, fostering so many hopes and dreams. I remember being that young person and seeing the Games in Calgary – that was the beginning of my amazing journey that has brought me here today.”

Hughes is the only athlete in the world to win multiple Olympic medals at both Summer and Winter Games as part of a career that will now span five Olympic Games.

She claimed her first medals at the Atlanta 1996 Olympic Games, capturing two bronze in the sport of cycling. She holds a total 18 Canadian titles, one world silver medal and has stood on seven Pan American Games podiums. The latter Games providing her with her first opportunity as flag bearer for Canada at the 2003 Pan American Games in Santo Domingo, Dominican Republic.

Hughes made her Olympic Winter Games debut at the Salt Lake City 2002 Games as a speed skater, competing in the 5,000 metres. Following her bronze medal performance, she became only the fourth Olympian to reach both the Summer and Winter podiums. Four years later in Turin, Hughes captured gold in the 5,000 metres and silver in team pursuit, becoming the only athlete to win multiple medals in both seasonal Olympic Games.

Away from the oval, Hughes is actively involved in supporting Right to Play, a group that aids disadvantaged youth through sport and activity. Following the 2006 Winter Games, Hughes donated $10,000 to the charity. She is an unwavering leader both on the ice and in the community, as heralded by the International Olympic Committee awarding her the 2006 Sport and Community Trophy.

“When I was appointed Chef, I said to myself that one of the greatest privileges will be to walk again in a full Olympic stadium as a member of the host country team,” said Canada’s 2010 Chef de Mission Nathalie Lambert (also an athlete in Calgary 1988). “I could be no more proud that Clara Hughes is our flag bearer. She represents the essence of the Olympic Games: a contagious passion, determination, perseverance, an exceptional record of achievements, and the most generous and charming personality.

Among these athletes are myriad interesting storylines and highlights to watch for, just a few of which are noted here:

• Brian McKeever (Calgary) becomes the first athlete to compete in both the Olympic Winter and Paralympic Winter Games, in the sport of cross-country skiing.

• The women’s hockey team will aim for a third straight Olympic title – and if successful many of the players will tie Marc Gagnon for the most winter gold medals with three.

• The speed skating team, with Hughes, looks to continue their Olympic magic and improve on their (Canadian record) eight-medal total from 2006.

• Nine provinces and one territory are represented by athletes in the 2010 Canadian Olympic Team.

“The Canadian Olympic Committee could not be prouder than to have such a remarkable Olympian and leader as Clara Hughes carry Canada’s flag into the Opening Ceremony,” said COC President Michael Chambers. “She embodies every Olympic value, has had amazing success in both the Olympic Winter Games and Olympic Summer Games, and represents Canada with pride on every occasion, in and out of competition.”

The complete list of the 2010 Canadian Olympic Team can be found by visiting http://www.olympic.ca. The site will be the home for the Canadian Olympic Team, providing 2010 results, athlete biographies, historical results, a list of all mission team members, schedule of events, downloadable headshots, links to all twitter pages for breaking news updates, and issues of “The Red Letter” daily newsletter.

At both the Turin 2006 and Vancouver 2010 Olympic Winter Games, it was Jenn Heil who put Canada on the…