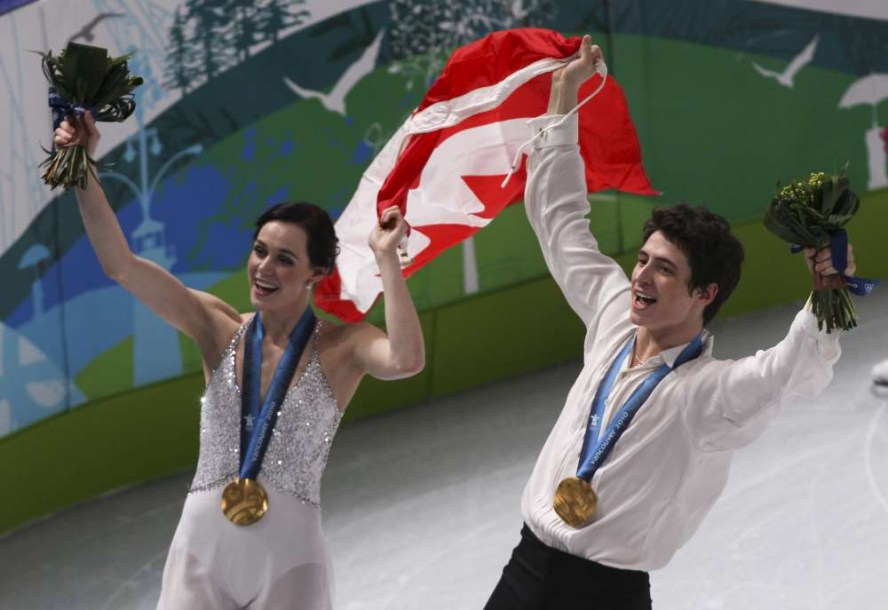 Carrying the hopes of Canada on their graceful shoulders, Tessa Virtue and Scott Moir did not relinquish their hold on first place in the final routine of Olympic ice dance. To the music of Gustav Mahler’s Fifth Symphony, the pair won Canada’s first Olympic gold in ice dance.

“It’s amazing, it’s the best feeling in the world,” said Moir. “We believed, we dreamed of this moment for a long time.”

The pair made skating in perfect unison look almost effortless in posting a score of 110.42 points – the biggest score of the night – in last night’s romantic free dance. Their cumulative point total was 221.57, nearly six full points ahead of their equally talented American training partners Meryl Davis and Charlie White.

“We wouldn’t be here if it wasn’t for Meryl and Charlie,” Virtue said.

Canada’s previous best in ice dance was a bronze medal won by Tracy Wilson and Rob McCall at the Calgary 1988 Olympic Winter Games. Nothing like a dance on home ice!

The Pacific Coliseum shook with applause once Virtue and Moir’s free program concluded, a gold medal not yet won but clearly imagined by most of the 11,000 in attendance. Moir shouted, “We love you Vancouver”, as the pair sat and awaited their score.

Their smooth dance included a move they nicknamed “The Goose” whereby Virtue takes a knee on Moir’s back while he glides across the ice, before she drops off and twists into his arms. The night is an exclamation mark on what has been a sparkling career for the two skaters.

They won silver at the 2008 World Championships and bronze in 2009. They have won gold and silver at World Junior Championships. They are three-time Canadian champions, have won three medals at the ISU Four Continents event, and a bounty of Grand Prix medals.

Now they have the big one to add to the collection. Tessa Virtue and Scott Moir are the fifth Olympic champions for Canada in 2010.