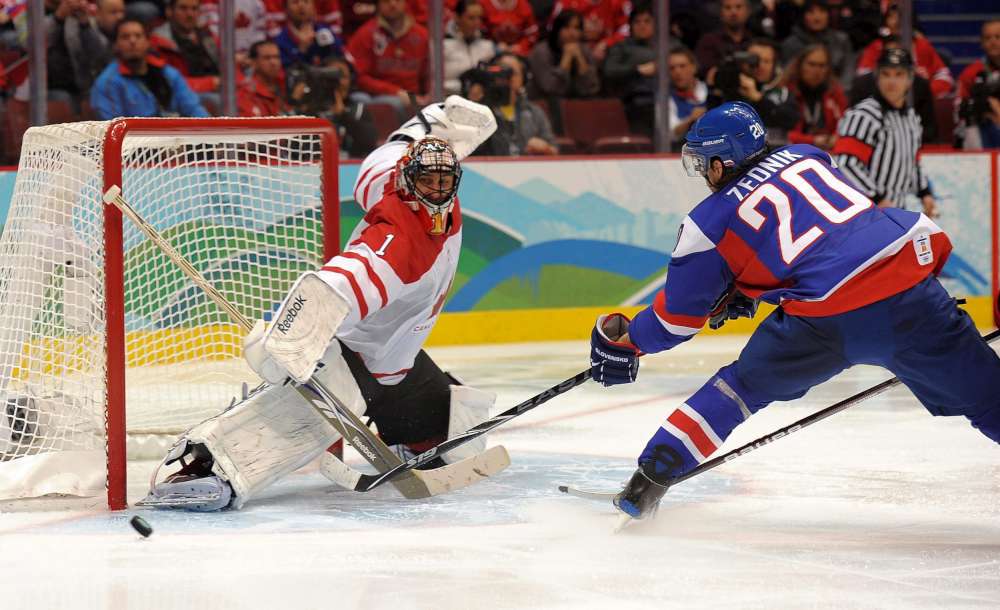 Catherine Wood: “It’s really hard to find the words to describe it but just walking in and you know, in your own country, I think it was unbelievable, it’s still kind of a blur in my head I’ll have to run it through, but it was an amazing feeling and to have friends by my side and everyone behind me I know at home watching and this is juts unbelievable and it was a great show tonight.”

Megan Agosta: “It’s definitely an honour and a dream to be able to go out there and have all the people in the stands cheering for you it’s a great feeling and I cant wait to get the Olympics started.”

Jennifer Botterill, after the team’s 18-0 win over Slovakia: “The atmosphere was even greater than in Winnipeg last year. The place was almost packed for warm-ups, which was fun for us. You look at the group and you get your salute and you get the standing ovation and that means a lot to us.”

Jayna Hefford, after the team’s 18-0 win over Slovakia: “It is about getting better every game. Work ethic was the first part. We were not ready to give up and the Slovaks did not give up also. That is what the Olympics are all about. We executed where we needed to execute. It was important to play the way we always play.”

Caroline Ouellette, after the team’s 18-0 win over Slovakia: “These are tough games to play. We shared the puck and we wanted everyone to get a chance to score. Tough games to play in. We want close games. That is why we train so hard. We want to show our fans some even games.”

Shannon Szabados, on her Olympic debut:

“We all bring some different elements at the Games. Everything is a stepping stone for us after playing these two games. These Games are preparing us to play a 60-minutes game and preparing us for the gold-medal game.”

Caroline Ouellette, on the team’s 10-1 win over Switzerland:

“It was important that we kept moving the puck and moving forward as a team. It is good that we practiced today. The rivalry we have against Sweden is very intense. We have had some very physical games against Sweden and we are looking forward to them. We know what to expect.”

Canadian defenceman Shea Weber, after Canada’s 8-0 win over Norway, on playing with veteran defenceman like Scott Niedermayer and Chris Pronger:

“It doesn’t take long to play with those guys. They’re so good, they really help you out in all areas of the game and make it easy on you.”

Canadian forward Joe Thornton, after Canada’s 8-0 win over Norway, on the depth of Canada’s forward unit:

“It’s a good start. Seems like all the lines have chemistry right now. It’s tough to tell after one game, but with only one practice all the guys looked like the flowed pretty good out there after the first period.”

Charline Labonte, after Canada’s 13-1 win over Sweden, on making her 2010 Olympic debut in the third period:

“That was awesome. I wasn’t expecting it and when I got the call I got nervous for a second. But I was just really excited.”

“I think we’re really good about pushing each other in practice and we have high tempo and I feel like we have some of the best players in the world so just competing against one another and getting in there and pushing each other around and getting ready for that physical style of game coming up, we have to play hard and pretend it’s a game.”

Gillian Apps, after Canada’s 13-1 win over Sweden, on preparing for the semifinals with five days off:

“We have a huge game coming up in semi-finals. Just studying Finland or the Americans, whoever we’re playing. Just moving forward, working hard in practice and making sure we stay sharp.”

“Anything coach Babcock needs me to do, I’ll do it and if it’s face-off well, I’m willing and ready to do that obviously.”

“Every country gets fired up to play us. They played well. I thought when it was 2-1 that we had some chances to make it 3, 4-1. He made some saves and we just missed some shots. They got a break on their second, and the third period I thought we had a lot of chances, he made some big saves. We got it done in the shootout.”

“It’s tough, it’s not the scenario that we wanted for sure. I thought our desperation was there, we worked hard, but it was one game, a lot can happen, they’re a good team, and unfortunately we didn’t win. We had some bad bounces, and in one game those make a big difference, and unfortunately it didn’t go our way. But if we play hard like that, we play desperate like that and control the puck the way we did down low, I like our chances against any team. ”

Michael Richards, after the Canada vs. Germany qualification game

“It’s a big game tomorrow, obviously, quarter finals. I think that whenever you play the Russians you always get up for it, and tomorrow is going to be even that much bigger, the quarter finals.”

Shea Weber, after the Canada vs. Germany qualification game

“I think it was good, we wanted to win no matter if it was 1-0 or 8-2, we got to win. The Russians are a great team, but so are we. So we’ve gotta prepare the way we can and play the way we can tomorrow. I think that every game, every practice together we’ve continue to get better. It’s tough in these short tournaments you gotta bond quickly and you’ve gotta have good chemistry; so hopefully now we can build on that and keep going.”

Marie-Philip Poulin, after the Canada vs. Finland semifinal

“Everything went well, we had a good first period. We wanted to win, and we did. We have a big game in two days, and it will be fun. We worked hard, and it is our ultimate goal. We are ready. There is always a big rivalry between Canada and the United States; it’s always fun, and we are really motivated.”

Jennifer Botterill, after the Canada vs. Finland semifinal

“As a group I thought we played connected. I feel like we had a lot of great shots, some great opportunities, and for us it is just bearing down a little bit and finishing. We believe in our team, for us we have confidence, we have respect and we know it is going to take a lot of hard work and playing together as a team.”

About being surprised on the outcome (score): “We just want to win. When we got up one, I thought we did a good job keeping after it, staying physical and staying aggressive to make it 2, 3, and staying in it. I’m really happy with the outcome.”

“It’s a great feeling, its something that I’ve dreamt about since I was little, and it’s finally come true. It couldn’t be better. Well I think that we stuck to the game plan. We got shots on net, and just used our power.”

Jennifer Botterill, about her gold medal after the 2-0 win over the United States:

“It’s incredible, they’re [the medals] beautiful and as soon as they put them around your neck, it’s pretty amazing. Shannon played outstandingly well. She was so calm, composed and she was just moving so well.”

“Definitely very proud, very honoured to be Canadian. To be able to represent your country in Canada and win a gold medal on home soil is an honour in itself. There is no doubt in my mind that we were prepared for whatever it was going to take. And I think that we battled hard and we had no doubt in our mind that if we went out there and played Canadian hockey that we would come out successful. ”

“It’s going to be intense. This is what we played the whole tournament for, we had to play an extra game but I think that’s a good thing, we got some line combinations working together fairly well now.”