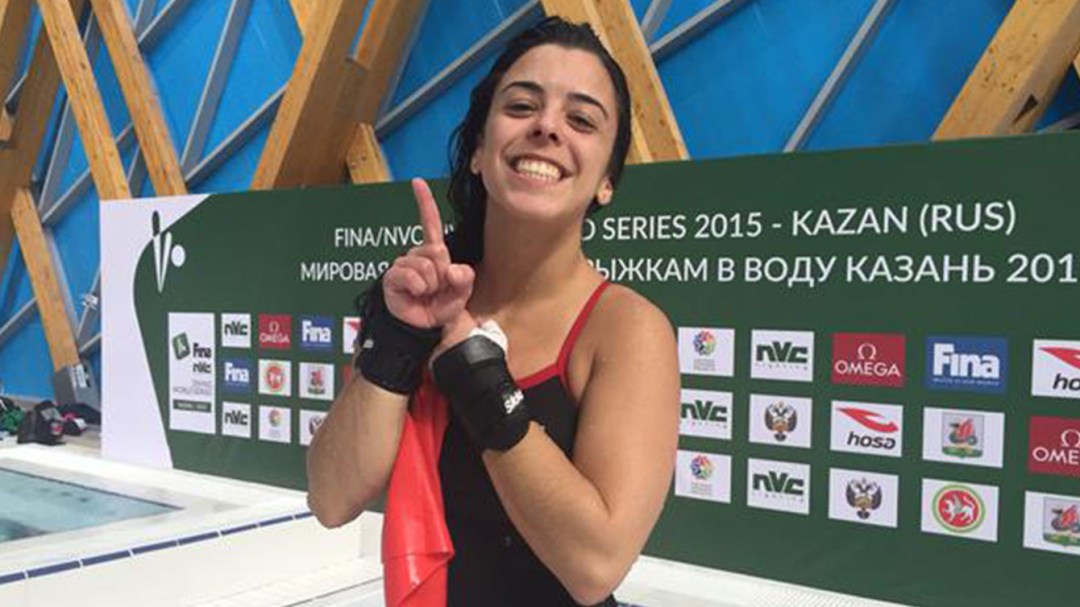 Meaghan Benfeito won the gold medal in the women’s 10m platform for her first individual medal of the season.

Benfeito scored 383.10 to edge China’s Chen Ruolin by 1.35 points who registered 381.75, taking the silver medal. The Kazan gold stands as Benfeito’s second-ever World Series win, significant given this one was over top of four-time Olympic gold medallist Chen Ruolin.

Great Britain’s Tonia Couch won the bronze medal with a five-dive tally of 360.30. Montreal’s Benfeito was 5th and 7th on platform, respectively, in the first and second Diving World Series events this season. Her previous win was June 2014 in Mexico.
Roseline Filion, an Olympic bronze medallist and Benfeito’s training partner, finished 5th.

It was a busy day for Benfeito. To end the competition she paired up with Vincent Riendeau in the mixed 10m synchro platform and won the silver medal. A Canadian score of 325.38 points was good enough to beat Russia’s Nikita Shleikher and Yulia Timoshinina. Lian Junjie and Si Yajie of China dove to 345.18 points to win the event.

Team Canada finished Kazan’s Diving World Series with one gold and five silver medals. The next event is May 1-3 in London, England.

There are five dives in a six athlete world series final. Abel scored 363.00 points, including the highest-scored dive of the final with her third effort, to skip past China’s bronze medallist Wang Han and her 335.30 points. Series leading Shi Tingmao of China is still unbeaten on springboard, this time turning in 384.60 points for the win.

The silver is Abel’s second world series medal of the season, adding to a bronze from earlier, while Kazan is the third of six stops. The 23-year-old’s last world series silver on springboard was March of 2013, she now has four in her career. Abel sits second in the overall 3m standings.

Later in the day, Abel paired with François Imbeau-Dulac to win a silver medal in mixed 3m springboard. The Canadians scored 324.33 points through five dives, and were edged by China’s Yang Hao and Wang Han who together measured 333.60 points. Italy’s Tania Cagnotto and Maicol Verzotto were third, scoring 303.00 points. Abel and Imbeau-Dulac were also silver medallists at the first two Diving World Series of the season.

First it was Meaghan Benfeito and Roseline Filion combining to win silver in the women’s 10m synchro platform, with a score of 316.11 behind Chinese divers Chen Ruolin and Liu Huixia at 338.88.

Later in the afternoon Russian time, Jennifer Abel and Pamela Ware also won silver, scoring 309.36 in the women’s 3m synchro springboard. The two Canadians were also bettered by Chinese divers, in this case Wu Minxia and Shi Tingmao who paired up to score 334.20 for gold.

FINA’s diving world series is the highest-level tour in the sport, and the Kazan instalment continues Saturday and Sunday with the individual competition. All four of today’s medal winners are joined by the men’s team of Maxim Bouchard, Philippe Gagné, François Imbeau-Dulac, and Vincent Riendeau who are competing in various synchro events only.