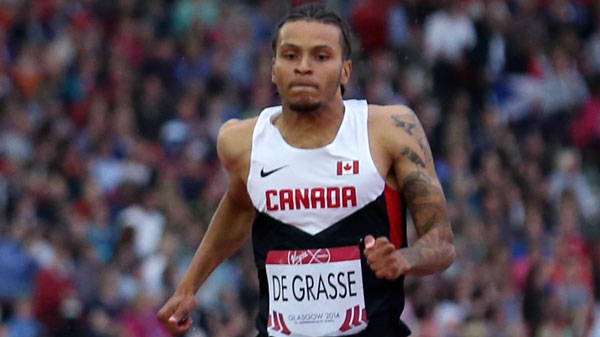 Andre De Grasse, a 20-year old sprinter, has destroyed the national 200-metre record, then broke the 10-second barrier in the 100m over two days.

De Grasse ran the bend at 20.03 seconds in Los Angeles on Saturday night, at the preliminaries of the Pac-12 Conference Track and Field Championships for his school, University of Southern California.

The Canadian had equalled the record once held by another USC man, Olympian Aaron Brown (who is only two years older), last month at 20.16. Brown was in Shanghai over the weekend, racing the 200m at Diamond League where he was fifth with a time of 20.57 (0.24 behind the winner Alonso Edward).

But it was Boldon’s 100m record (10.03) that fell on Sunday as De Grasse sprinted to victory in 9.97 seconds. In the process, the new sprint king of Pac-12 became only the third Canadian to legally run the 100m under 10 seconds and the first since Bruny Surin did it in 1999.

Boldon chimed in on losing his 19-year old mark with a “well deserved” on Twitter.

Only about an hour after his latest benchmark on Sunday, De Grasse was in the 200m final. Although he won a comfortable victory, likely fatigued (also having run the relay), the Canadian could muster no better than 20.05 ending an exhausting two days. Boldon’s record rests for another year, but De Grasse is a junior (third) year student at USC and should return for another season of competition.

It is more than likely the next time De Grasse steps out of a 200m block, should he be fresh, he will become the first Canadian to run 200m under 20 seconds. 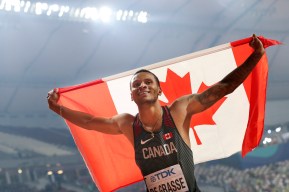