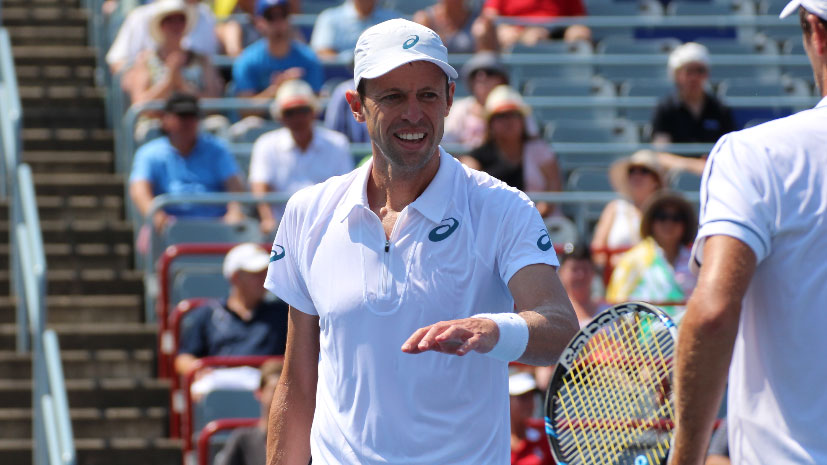 In the final it was a step too far for Canada’s Daniel Nestor and French partner Edouard Roger-Vasselin, the duo finished runner-up in the men’s doubles competition of Rogers Cup in Montreal on Sunday.

The Canada-France combo was defeated by the world’s best doubles team, Bob and Michael Bryan of the United States in three sets, 7-6 (5), 3-6, 10-6. Nonetheless, for Nestor and Roger-Vasselin, it was a tremendous tournament in their first partnership, winning four matches including an upset over the second seeded team of Marcelo Melo (Brazil) and Ivan Dodig (Croatia). 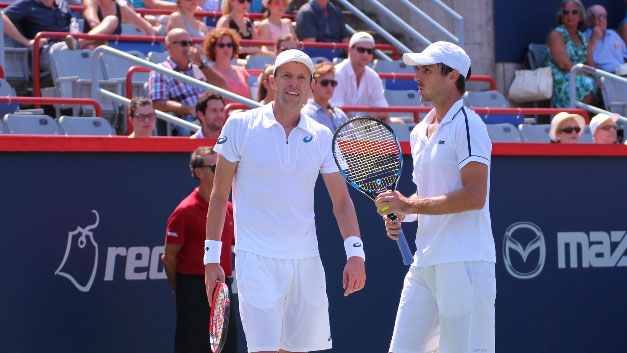 Daniel Nestor and Edouard Roger-Vasselin discuss strategy for the next point during the 2015 Rogers Cup final in men’s doubles.

“You guys have been bothering me for a long time,” Nestor said jokingly on court post-match toward the top ranked Bryan brothers. He also played to the home crowd telling Montrealers that although he is from Toronto, he prefers their edition of the Rogers Cup. The men’s and women’s tournaments alternate between the two cities each year.

An injury to Roger-Vasselin’s regular partner, fellow Frenchman Julien Benneteau, has opened the door for a temporary partnership with Nestor that is likely to last through the upcoming U.S. Open, the Canadian indicated in the post-match press conference.

Not knowing what to expect in Montreal, Nestor seemed pleased with the week, though he slightly laments that his 88th title may have been left on the court. 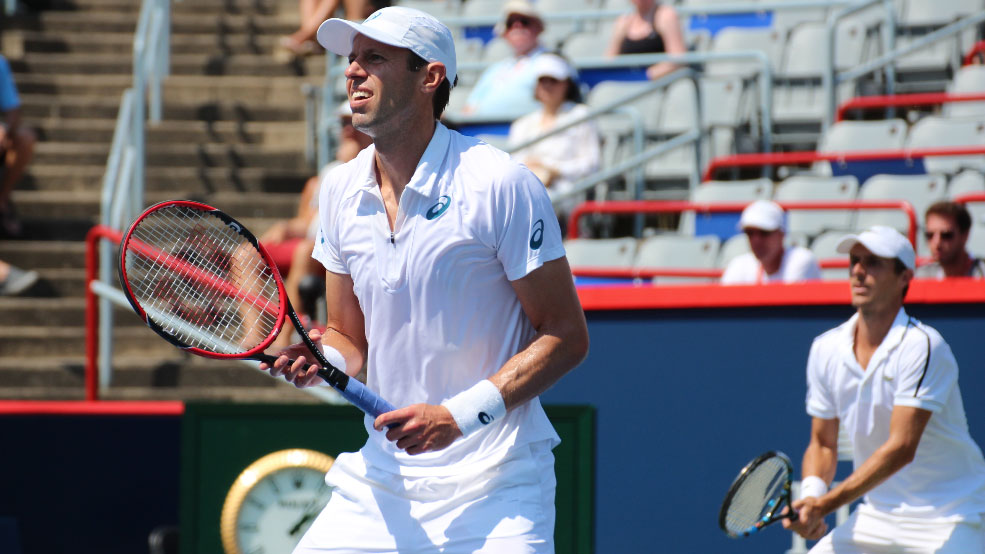 Daniel Nestor, ahead of partner Edouard Roger-Vasselin, waits for a serve at the 2015 Rogers Cup men’s doubles final.

“If you had offered me this before the week started for sure,” Nestor said when asked if he was happy with the run, “but once you get in the final and then you have some chances and you start looking back and it’s ‘what if.’”

“Overall they’re a tough team and they always seem to play at the same level. If you play well you have a chance, if you give them too many chances they’ll beat you.”

The Bryans are the only players in history to win more doubles tournaments than Nestor in the Open Era.

“They’re the best team ever and they play well when it matters. You have to maintain your level and can’t give them anything.” 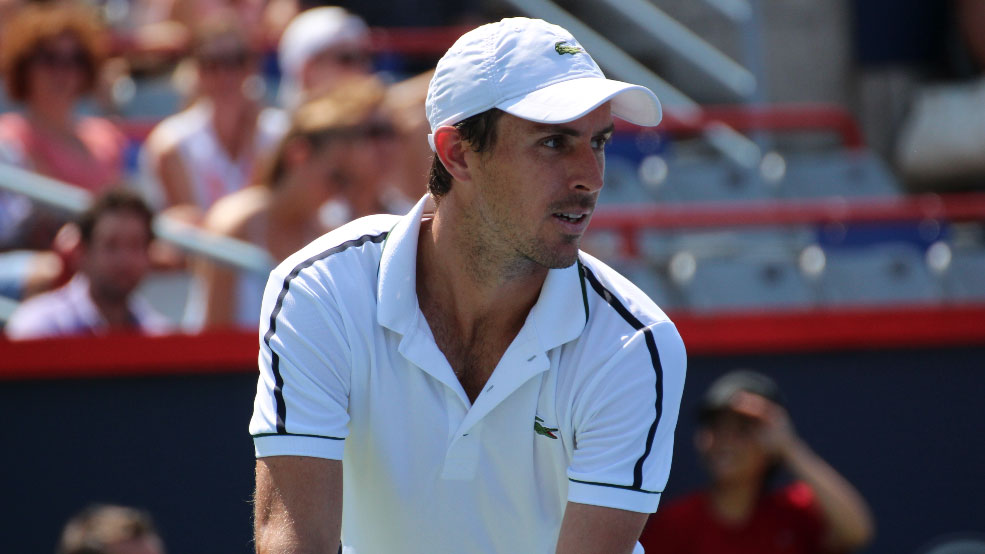 Edouard Roger-Vasselin partnered Canadian Daniel Nestor at the 2015 Rogers Cup after his regular teammate and fellow Frenchman Julien Benneteau picked up an injury.

With another outing behind him, Nestor, 42, had to answer the inevitable questions about his future.

“I don’t know, no idea. Depends on rankings, the body, Davis Cup is obviously still important,” Nestor said before musing about the Olympics next year.

“Four years ago at the Olympics, I said there was no chance I could play Rio, now it looks likely I will play.”

“I can’t make any predictions. Right now I’m planning on playing next year.” 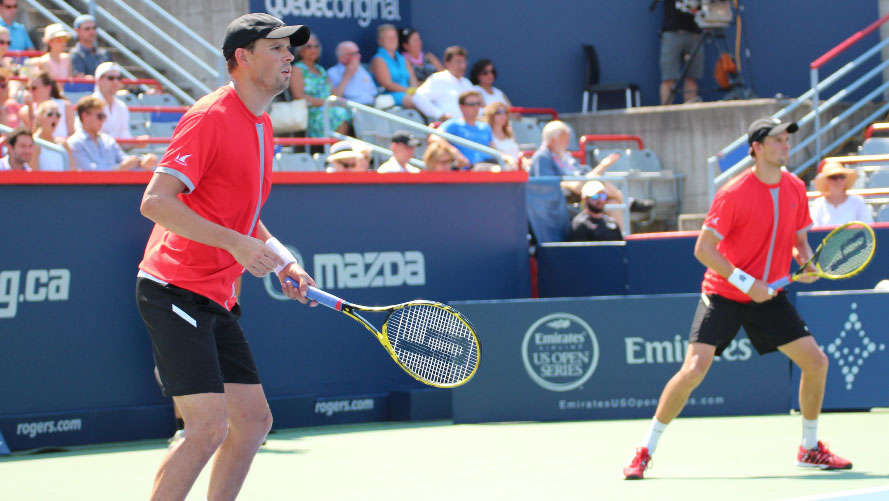 Bob and Michael Bryan won the men’s doubles title at 2015 Rogers Cup in Montreal, beating Canadian Daniel Nestor and Edouard Roger-Vasselin of France in the final.

Nestor’s Davis Cup partner for Canada is another top doubles player, Vasek Pospisil, who this season has enjoyed some singles success as well, reaching the quarterfinals of Wimbledon.

Prior to Nestor winning Canada’s only Olympic tennis medal – a gold at Sydney 2000 – with Sebastien Lareau, the two partnered in the ATP Tour to get comfortable with each other. Some wondered if the same could happen for Nestor and Pospisil ahead of Brazil.

“I’m always available to play with him but unfortunately he has a good partner now,” Nestor said laughing about his compatriot’s often-successful chemistry with American Jack Sock.

“Vasek’s in a great partnership with Sock and I’m waiting to see if I can find a new partner full time.” 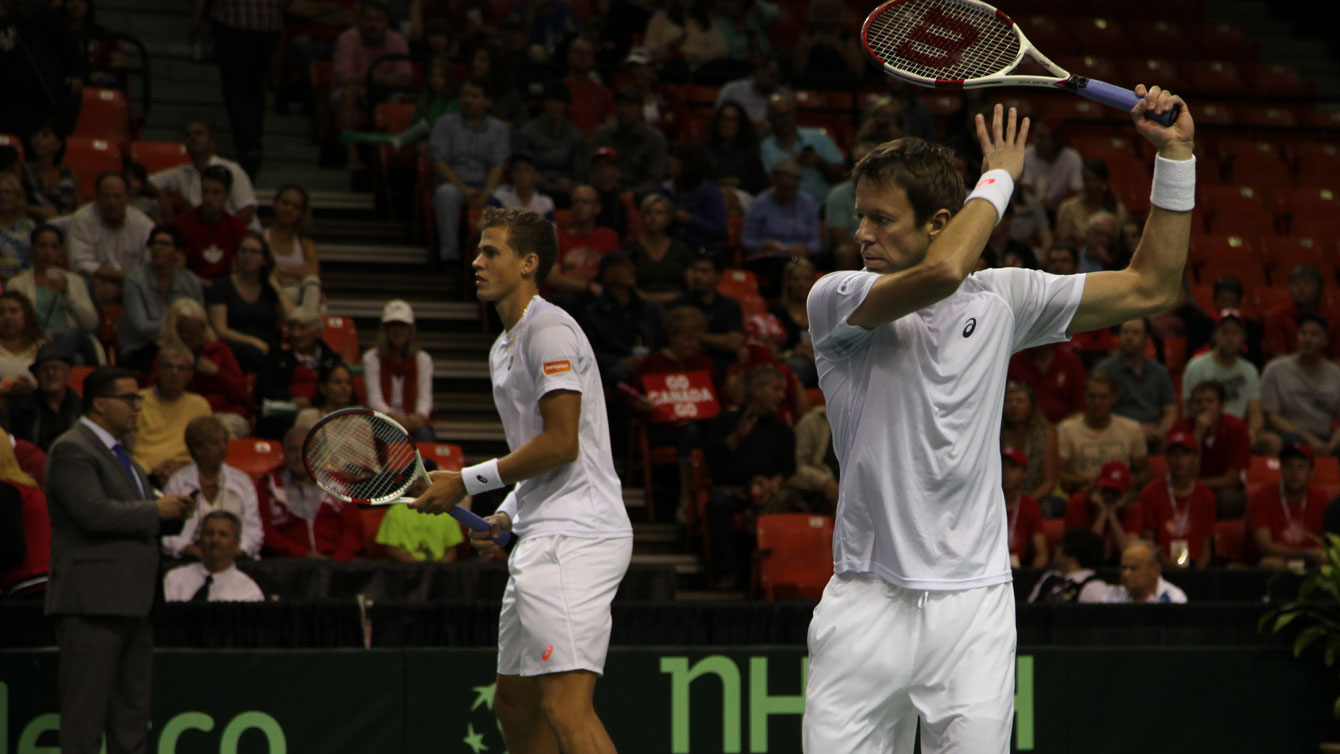 Daniel Nestor (right) and Vasek Pospisil during warm-up prior to their 2014 Davis Cup match versus Colombia’s Juan Sebastian Cabal and Robert Farah.

Nestor and Roger-Vasselin beat potential Serbian Olympic team members Novak Djokovic and Janko Tipsarevic in the semifinals (more on this below). Djokovic, who is the top singles player on the planet and took the court in the men’s final following Nestor’s match on Sunday, had joked that in 15 years he would like to be Nestor’s doubles partner.

“I might be playing, but won’t be at a very good level.”

When all else fails, Canadian tennis can always count on Daniel Nestor.

In a week that provided little good news for Canada’s tennis fans in Toronto and Montreal at Rogers Cup, 42-year old Nestor managed to salvage pride for the maple leaf by making the men’s doubles final on Saturday with French partner Edouard Roger-Vasselin. The pair beat Serbian duo of Novak Djokovic and Janko Tipsarevic 3-6, 6-1, 10-4 and will play for the title on Sunday in Montreal. 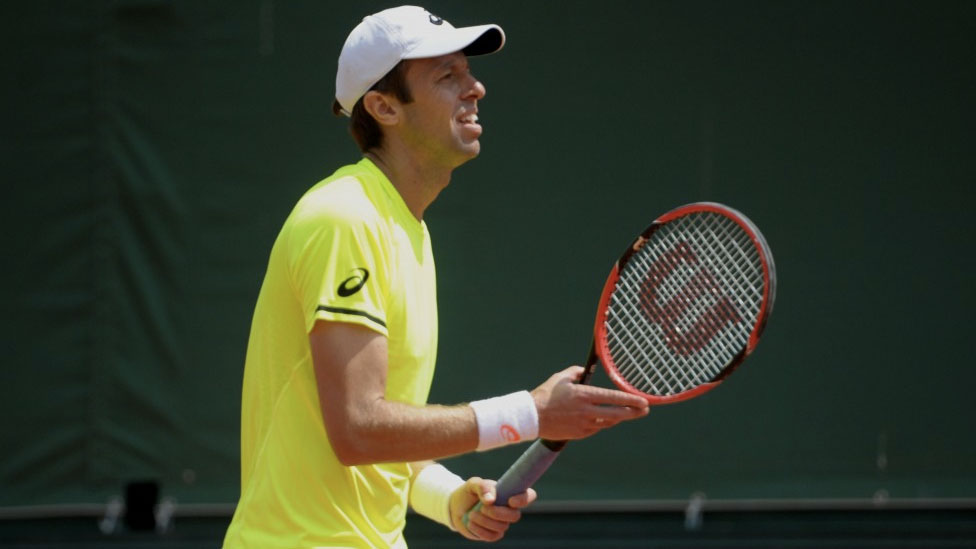 Djokovic had just made quick work of Frenchman Jeremy Chardy in a men’s singles semifinal in just one hour and 21 minutes before playing in the doubles contest. The Serbians took the first set after breaking Nestor/Roger-Vasselin for a second time at 4-3 before consolidating. The teams had traded service breaks earlier in the set.

The Canada-France combo was far more potent in the second set, breaking the Serbians twice and cruising to a 6-1 win to even the contest.

That meant a first-to-ten tiebreak for a place in the men’s doubles final. There was a lot of back-and-forth early on, until Nestor and Roger-Vasselin won two consecutive mini-breaks while up 7-4. From there the eventual winners were able to serve out the match. 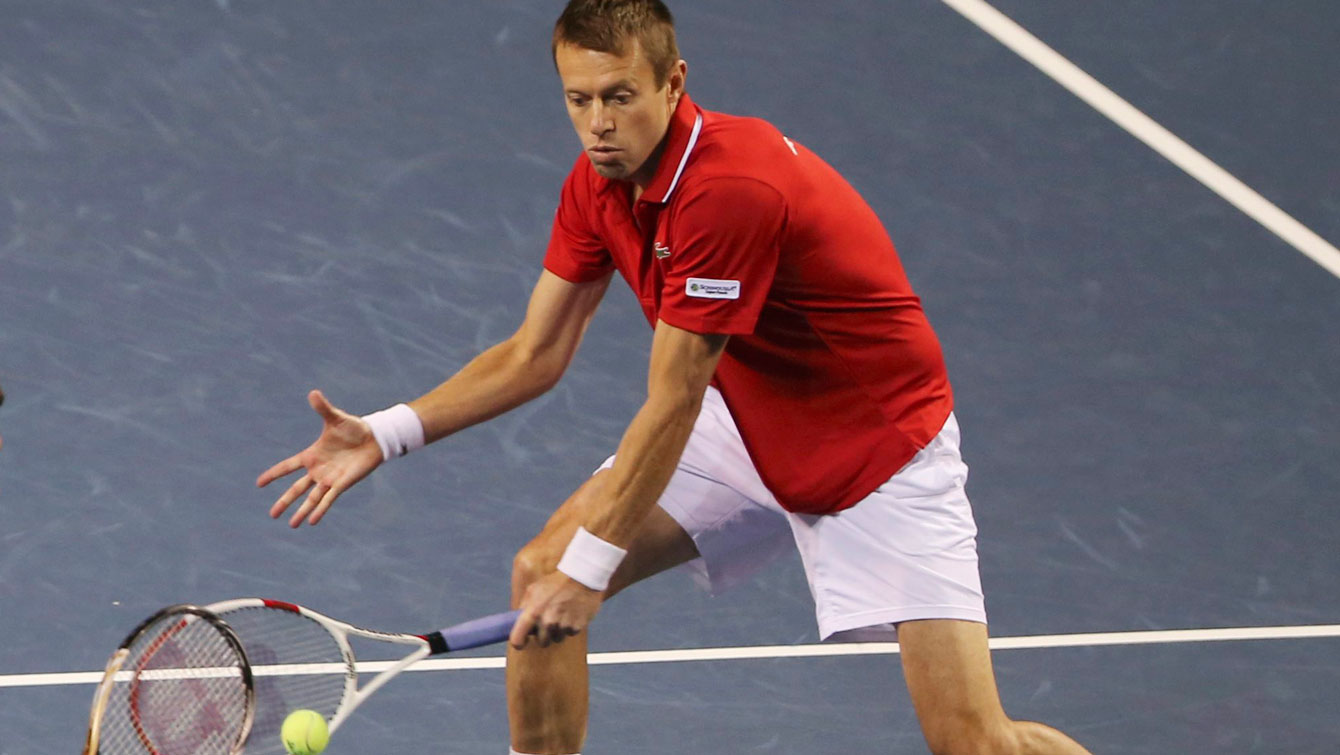 Nestor and Roger-Vasselin will play top-seeded Bob and Michael Bryan of the United States on Sunday. They beat the number six team of Alexander Peya (Austria) and Bruno Soares (Brazil) on Saturday 6-7 (7), 6-4, 10-7.

Earlier in the week Canadians watched their top singles players exit the tournament early before all other doubles teams featuring Canadians too were eliminated from the men’s and women’s tournaments in Montreal and Toronto, respectively. 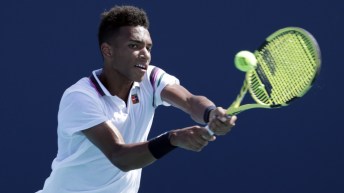 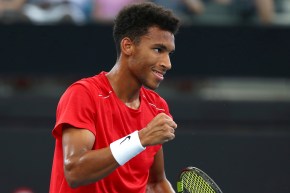 The men’s doubles tennis gold medal match at Sydney 2000 was like David beating Goliath. On one side of the...