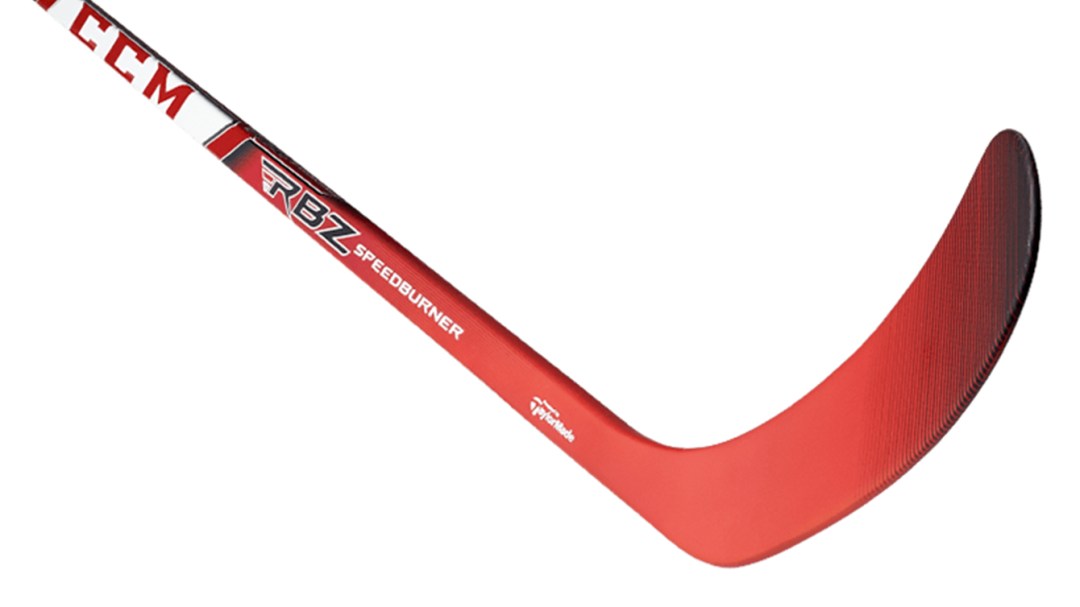 Part one: The most dramatic sport equipment advancements

November 2015: Olympic.ca is exploring the evolution of sport – more details.

There is a good chance the equipment used in your favourite sport has evolved in some way during your time as a fan.

Sport is performance-based, and there is great incentive to improving the tools of the game. And sometimes the evolution is rapid and dramatic.

In the summer of 2009, over one single summer, world-class swimming would be rocked by the full-body suit.

Now, at the time the full-body suit wasn’t actually a new thing. Australian great Ian Thorpe was, as legend goes, cut out of his wrist-to-ankle adidas swimsuits after every race back at Sydney 2000. By Beijing 2008, Speedo had introduced their famous LZR Racer which used polyurethane-based panels in key spots on the body. 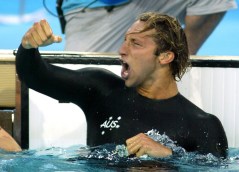 Ian Thorpe celebrates his gold medal in the 200m freestyle at Athens 2004. Look at that suit, tho. 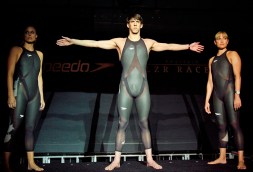 The main difference come the 2009 World Championships in Rome was the amount of polyurethane. An Italian company named Jaked famously made a suit entirely of the new fabric. Mayhem. Michael Phelps even lost a race, still using his LZR Racer in defiance (and probably contractual obligations). Suits were streamlining bodies and damn near floating the swimmers. 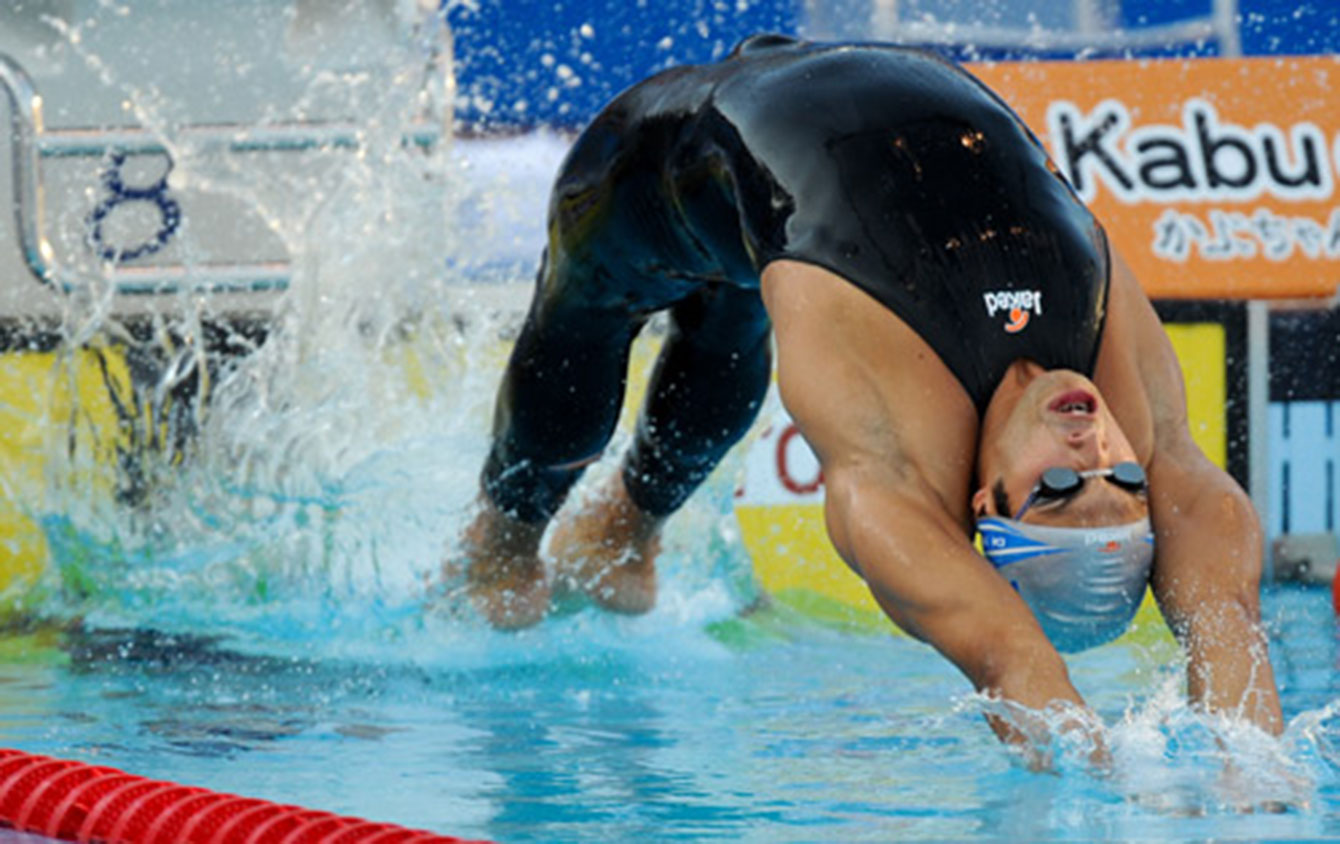 An example of a Jaked full-body suit, eventually banned by FINA.

Before, an elite swimmer might shave off one-tenth of a second in a 100m race with a year of training. With a Jaked suit, people were dropping one full second.

Caught off-guard, swimming’s governing body (FINA) implemented a ban on suit length and material for the start of 2010. Today, of 40 swimming world records (at the time), sixteen are from Rome 2009 marking the indelible effect of the infamous full-body suit.

Speed skating world records tumbled in the late-90s when the ‘klap’ skate was widely adopted at the highest level. The new skates allowed the blade to detach from the heel, snapped back by a hinge at the toe.

In her book, Clara Hughes writes “By allowing greater pressure to be applied through the calves, the high-tempered steel blade remained in contact with the ice for longer, maximizing output for energy invested.”

A really nice picture of how the clap skate assists through longer blade-to-ice contact. Credit

The body mechanics that contribute to keeping the blade on the ice longer have been revised over time, but the impact on the sport has never been questioned. The ‘klap, klap, klap, klap’ is a familiar sound for fans at ovals around the world. Catriona Le May Doan was at her peak when the clap skate showed up, and became the first Canadian to defend Olympic gold, while using the technology at Salt Lake City 2002.

More: How technology is changing the game

The curling broom, only eclipsed in its banality by the ski pole, became a polarizing headline in the 2014 curling season.

“Hurray hard!” The popular (celebrated or belittled) curling command is related directly to the ferocity of the ‘sweeping’, which creates friction on the pebbled-ice and alters the way a stone ‘curls’.

“There were many times last year that we just couldn’t compare to the teams we were playing in how they were able to affect the rocks,” said Brad Jacobs, in this TSN story. “At first I thought that maybe it had something to do with sweeping, but then I realized it couldn’t be – we had two of the strongest sweepers in the game.” 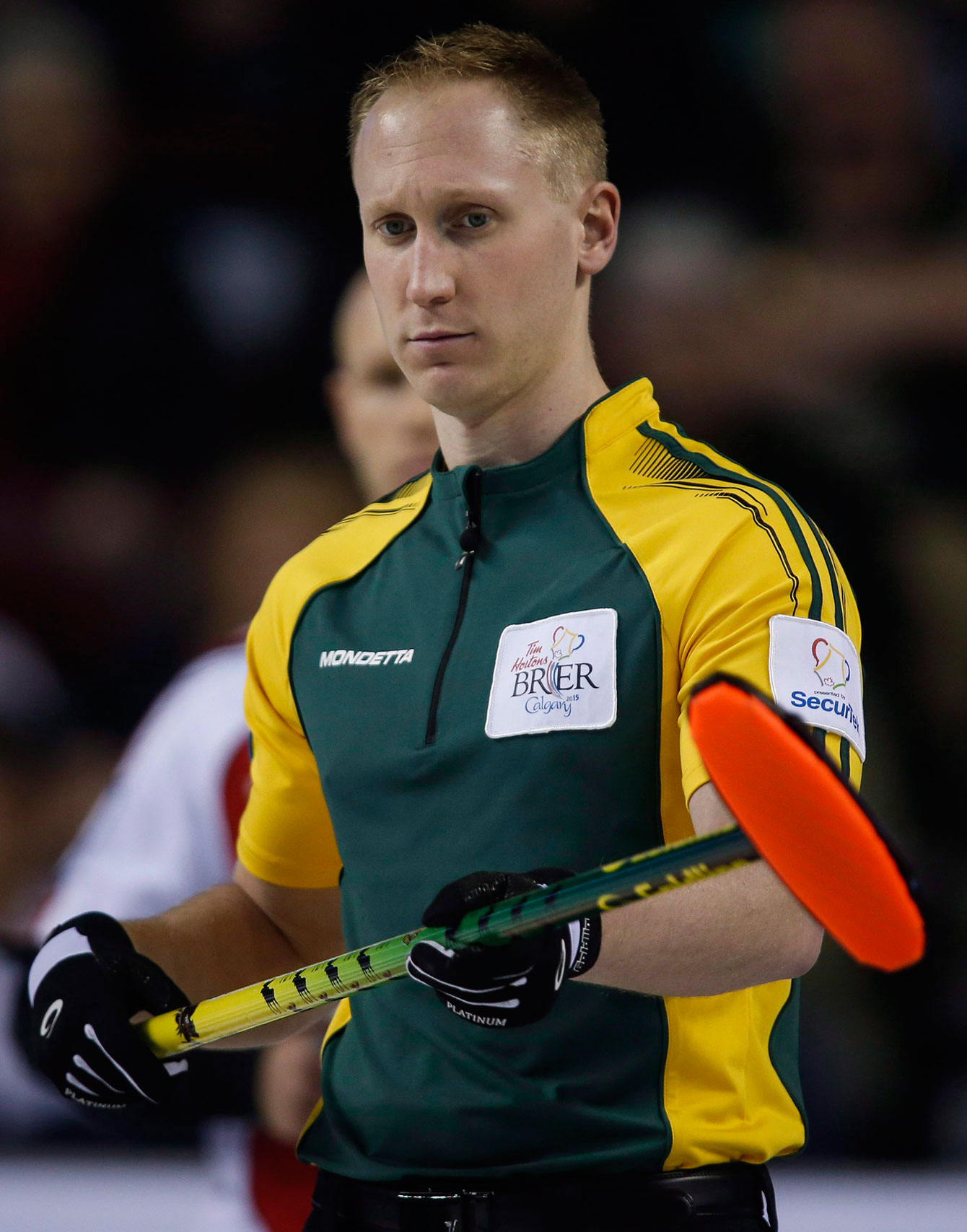 Brad Jacobs, toting a regular broom at the 2015 Brier.

It’s true, Olympians Ryan and E.J. Harnden are ripped. The boys can sweep. How were other teams doing it?

As Bob Weeks writes in that same TSN story, “…tiny lanes are created on the ice upon which the rock travels. Turn the broom heads another way and it can be used to slow up the rock by creating speed-bump-like ridges. All the result of  ‘directional fabric’ and various ‘sweeping patterns’.

Many elite curling rinks, including Olympic gold medallists Brad Jacobs, Brad Gushue, and Jennifer Jones have signed a statement committing they won’t use brooms with a ‘directional fabric’.

The World Curling Federation also banned the wacky brooms from an upcoming competition.

Nothing dates you more than referencing your old Sher-wood or Titan. No one uses them anymore.

According to the Toronto Star’s Dave Feschuk in this good timeline, manufacturers have been experimenting with alternatives to wood such as fiberglass since the 1950s. 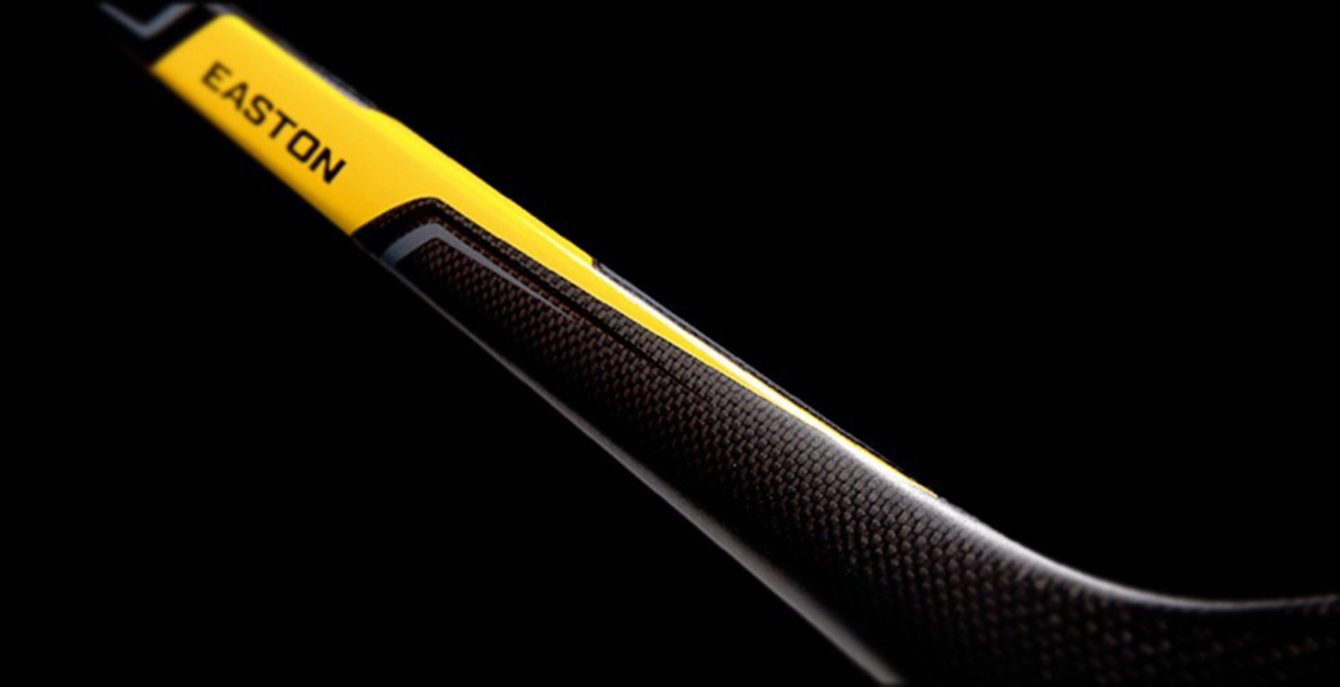 Easton has dominated the market with hockey stick advancements.

It wasn’t until the early 2000s that one-piece composites entered the main stream and now, they are ubiquitous. To keep it simple, composite just means the use of materials like carbon fibre, aluminum, fiberglass, and kevlar.

Composite materials alter the behaviour of the stick during every type of shot, creating more power by bending and whipping, plus they’re lighter. Now the conversation around stick shafts is kick point and flex. For blades its curve and lie.

Kicking a perfectly inflated soccer ball, that unifying joy, is a sensation even the most sedentary of people can appreciate.

The ball has changed. In this wonderfully imagined New York Times story, the leather-laced originals are unrecognizable next to the heat-sealed panels of the Brazuca, adidas’ 2014 World Cup kickable. 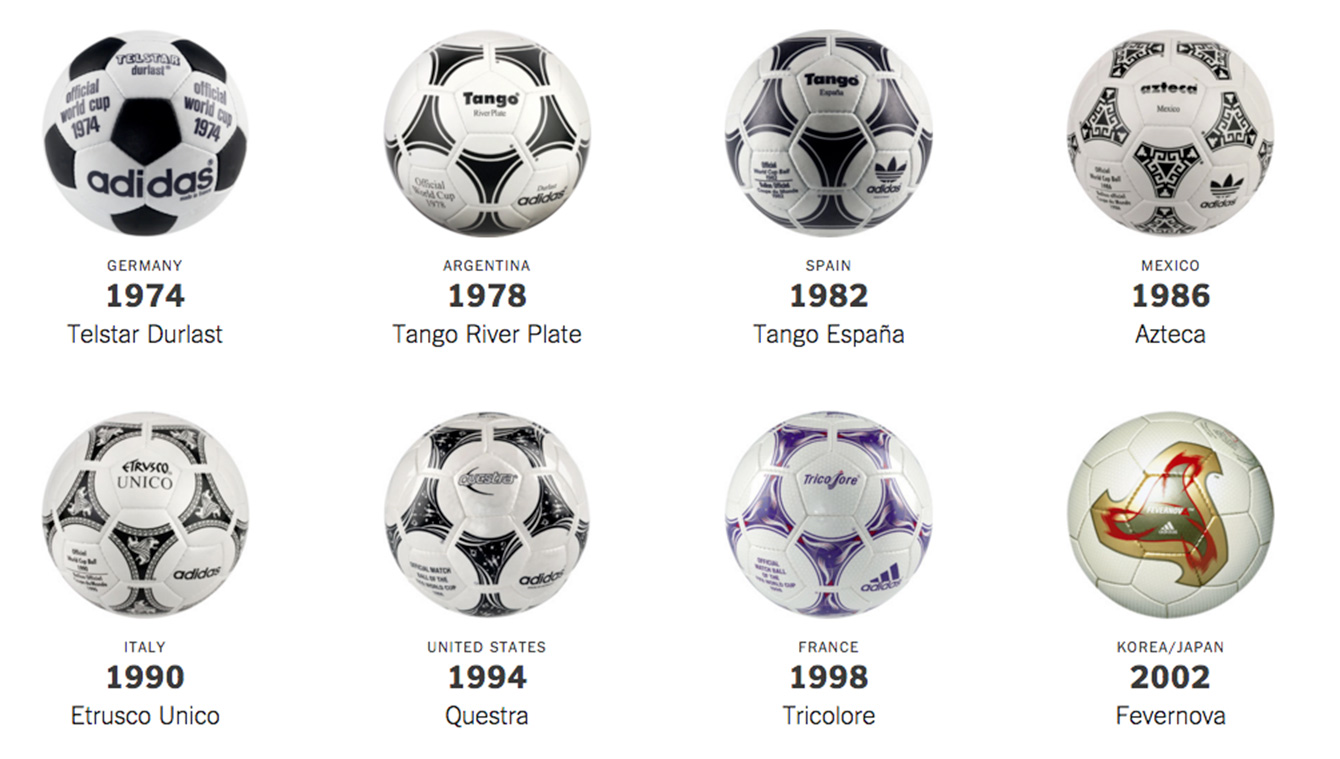 A snapshot of the soccer ball’s progression, over 30 years. (Credit: New York Times) 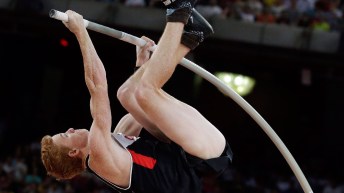