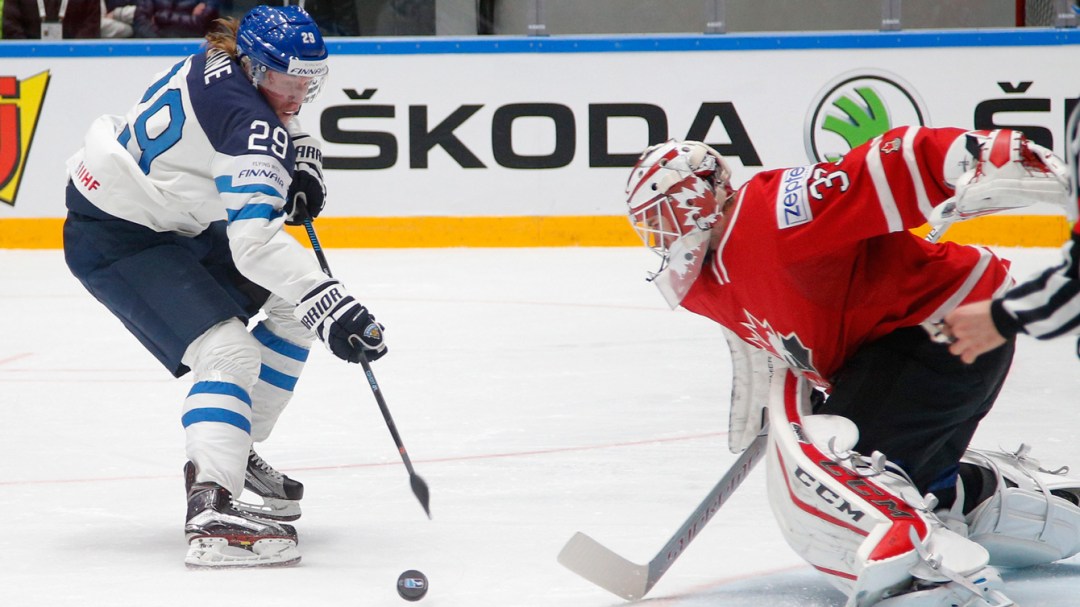 Canada dropped its final preliminary round game of the 2016 IIHF World Championship on Tuesday, falling 4-0 to Finland.

With the loss, Canada finished second in Group B with a 6-1 record. They’ll now face Sweden in the quarterfinals on Thursday.

Finland opened the scoring 6:10 into the second period when Tommi Kivisto fired a point shot that was deflected between the legs of Canadian goaltender Cam Talbot. With just under four minutes left in the second, a Leo Komarov shot fooled Talbot to make it 2-0 for Finland. Then with 1:10 to go, Mika Pyorala put in a rebound to give the Finns a 3-0 advantage. 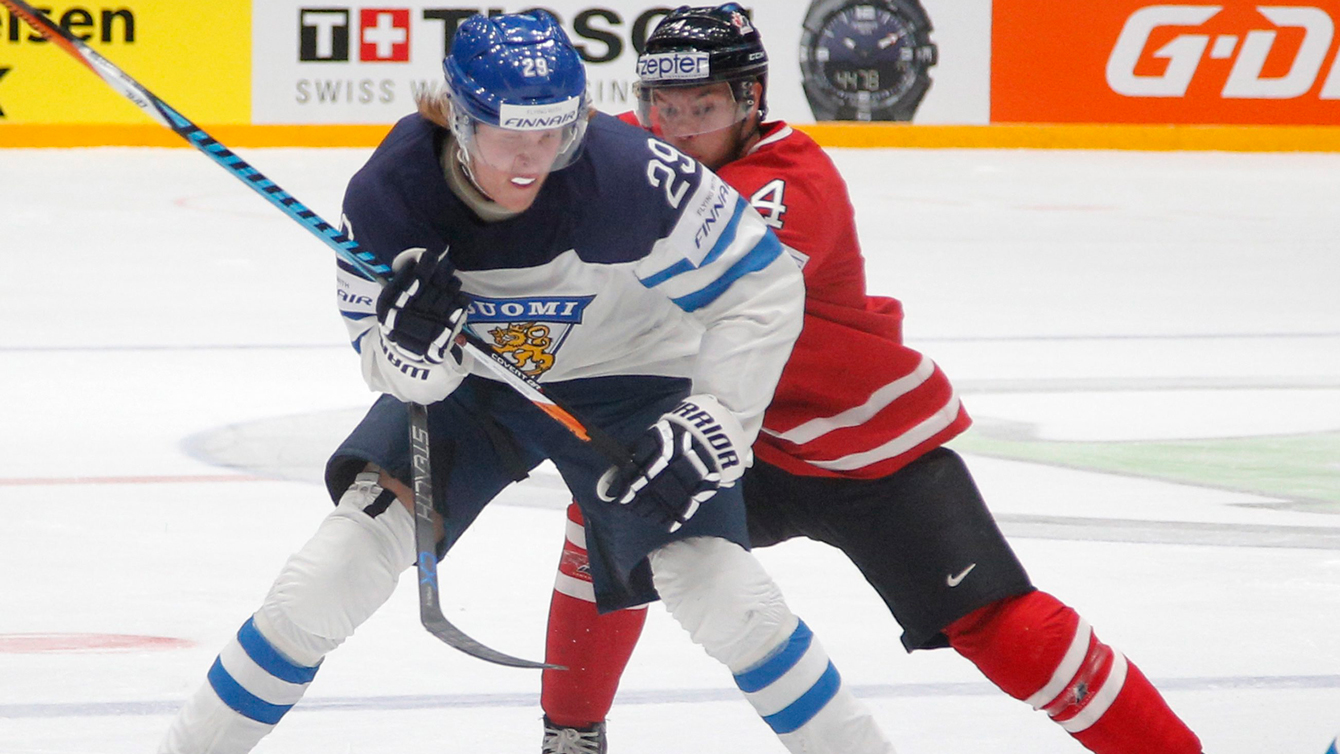 Patrik Laine of Finland, left, fights for the puck with Canada’s Taylor Hall during the World Hockey Championship in St.Petersburg, Russia on May 17, 2016. (AP Photo/Dmitri Lovetsky)

Finland further cushioned its lead just 2:32 into the third period when Jarno Koskiranta scored, making it 4-0. Despite back-to-back power plays midway through the final frame, Canada could not get on the board and was shutout for the first time in this year’s tournament.

Sweden, Canada’s quarterfinal opponent, finished the preliminary round with three regulation and two overtime wins and a pair of regulation losses. The other quarters will feature Finland taking on Denmark, Germany facing Russia and the Untied States playing the Czech Republic.

Canada improved to six wins and no losses at the 2016 IIHF World Championship with a 4-0 victory over France on Tuesday.

Calvin Pickard made 13 saves in Canada’s second consecutive shutout and third of the tournament. The team has given up just four goals in six games.

Mark Stone opened the scoring 8:32 into the first period on a power play goal setup by Taylor Hall and Connor McDavid. The Canadians doubled their lead in the second period when Corey Perry and Ryan Ellis setup Matt Duchene with 4:34 remaining in the frame. 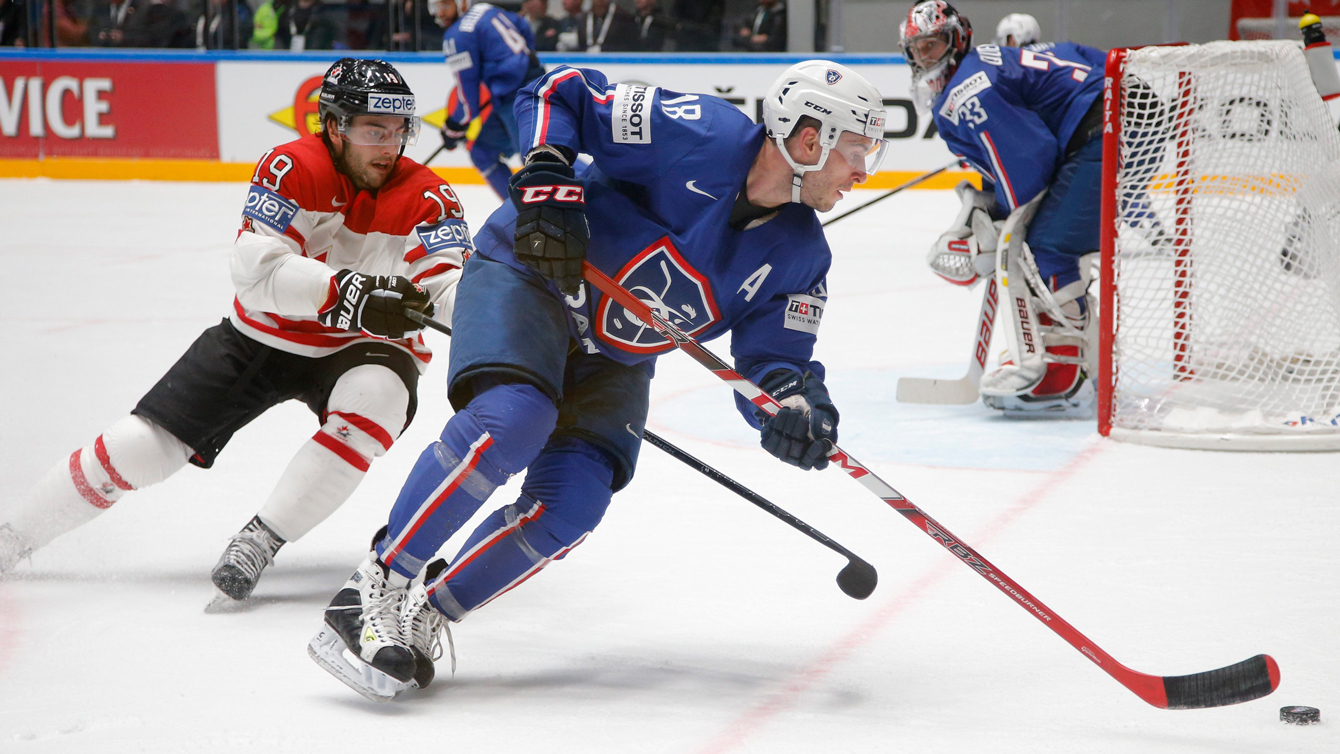 France’s Yohann Auvitu, right, fights for the puck with Canada’s Derick Brassard during an IIHF World Championship match in St.Petersburg, Russia on May 16, 2016. (AP Photo/Dmitri Lovetsky)

Mark Scheifele scored 3:51 into the third period on a goal assisted by Mark Stone and Brad Marchand. Then with 5:15 remaining in the match, Ryan O’Reilly and Brendan Gallagher setup Perry to give Canada a 4-0 victory.

Canada plays its final game of the preliminary round on Tuesday against undefeated Finland.

Cam Tablot backstopped Canada to a 5-0 victory over Slovakia at the 2016 IIHF World Championship on Saturday in Russia.

Talbot made 18 saves to give the nation its second shutout of the tournament. The first came when he saved 14 shots, during Canada’s 8-0 victory over Belarus earlier in the week.

Morgan Rielly opened up the scoring for Canada at the 11:09 minute mark with the help of Derick Brassard. Matt Duchene extended the lead before the period was over, with an assist coming from Brad Marchand, which sent Canada into the the second with a 2-0 lead over Slovakia. 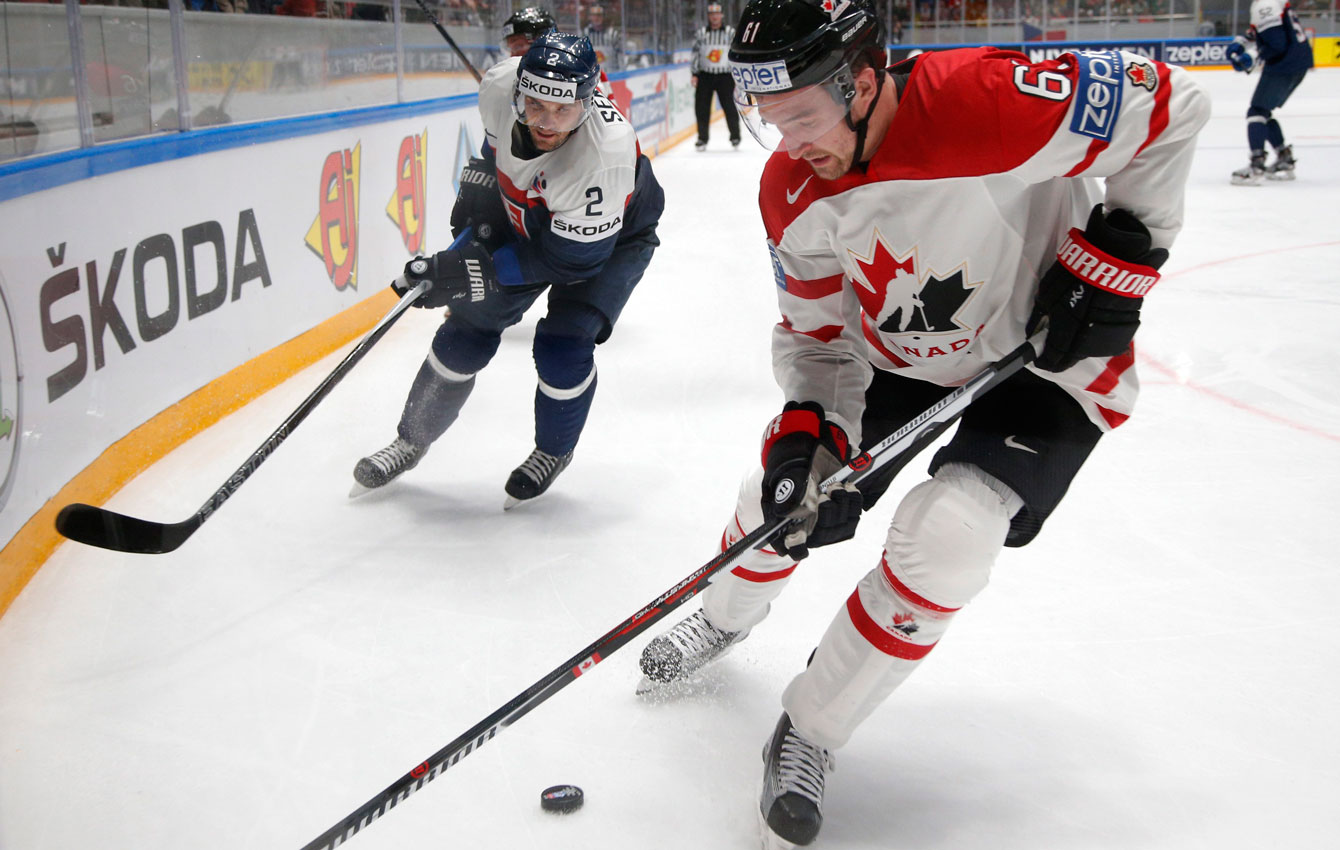 Mark Stone fights for the puck during the Hockey World Championships in St.Petersburg, Russia, on May 14, 2016. (AP Photo/Dmitri Lovetsky)

A power play in the second period allowed Mark Stone and Connor McDavid to setup Taylor Hall, making it 3-0 for Canada. Mark Scheifele continued the momentum with another another goal, assisted by Sam Reinhart and Stone.

Brassard scored the final goal in the third period after assists from team captain Corey Perry and Ryan Murray, giving Canada a 5-0 win over Slovakia. Next up, Canada will play France on Monday.

Canada was first on the scoreboard, with a goal from Taylor Hall sent under German goalie Timo Pielmeir’s right arm, assisted by Ryan Murray. German fans got prematurely excited, after a shot off Gerrit Fauser’s foot went into the Canadian net, before the goal was disallowed and Canada ended the period up by one. 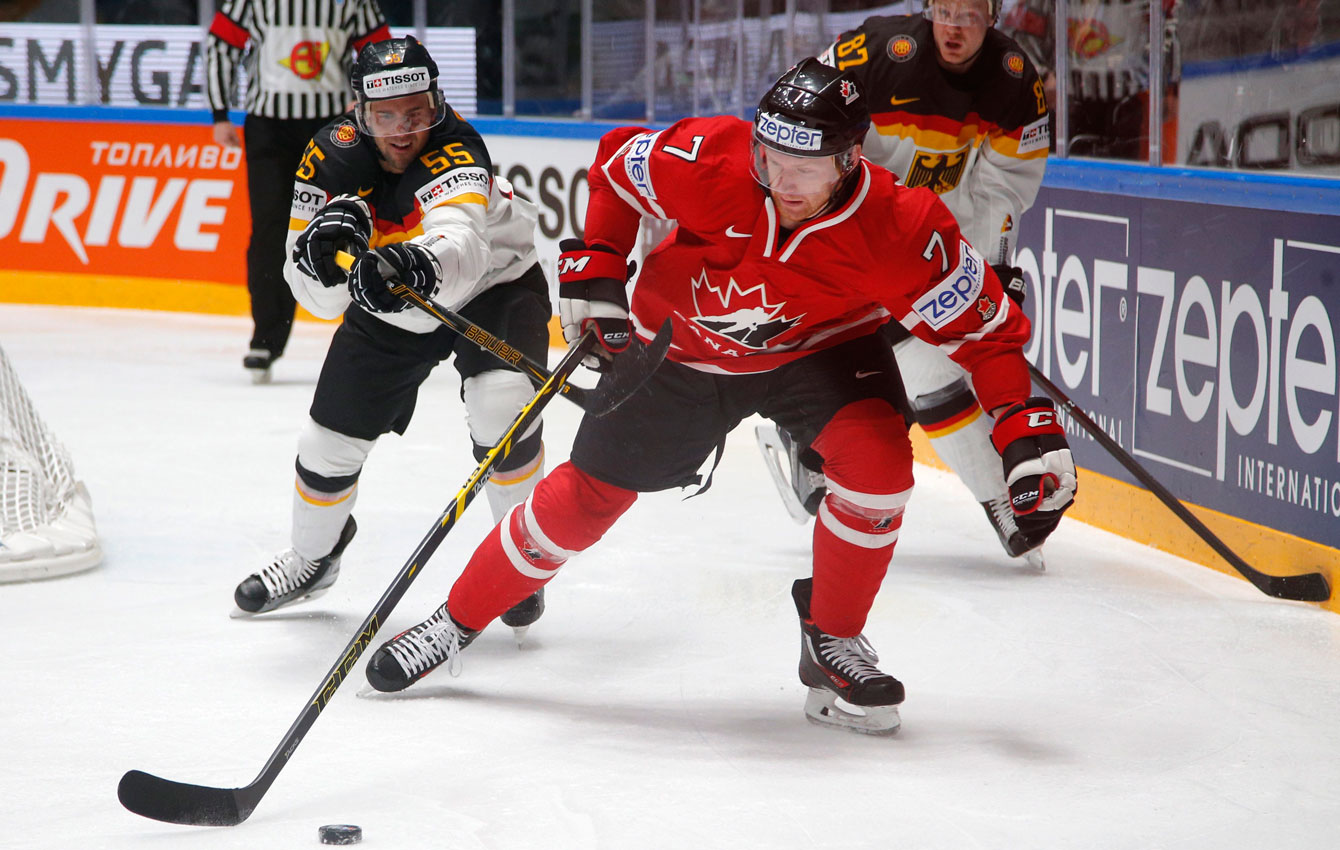 In the second, team captain Corey Perry scored on a power play, assisted by Matt Duchene and Derick Brassard. Germany got its long awaited first goal at the 11:31 minute mark from Sinan Akdag. That was quickly followed up by another German goal which tied up the game at 2-2 with less than three minutes left in the second.

Hall opened the scoring in the third with his second goal, after a beautiful pass through German defenders by Connor McDavid, with the other assist going to Michael Matheson. Boone Jenner added another for Canada soon after, with the help of Morgan Rielly and Brassard. Ryan O’Reilly won a tough face off to set up the final goal by Cody Ceci, who has scored at least one point in each of Canada’s four tournament games so far.

After more than 17 minutes of goalless play, Derick Brassard put Canada on the score board with a power play assisted by Olympian Corey Perry and Matt Duchene.

One minute into the second a turnover from Ryan Murray helped Perry to his second goal of the tournament. A short goal from Ryan O’Reilly increased Canada’s lead to three, before a goal at the 11:19 minute mark by Duchene. Taylor Hall closed scoring in the second, with a power play assisted by Brassard and Cody Ceci. 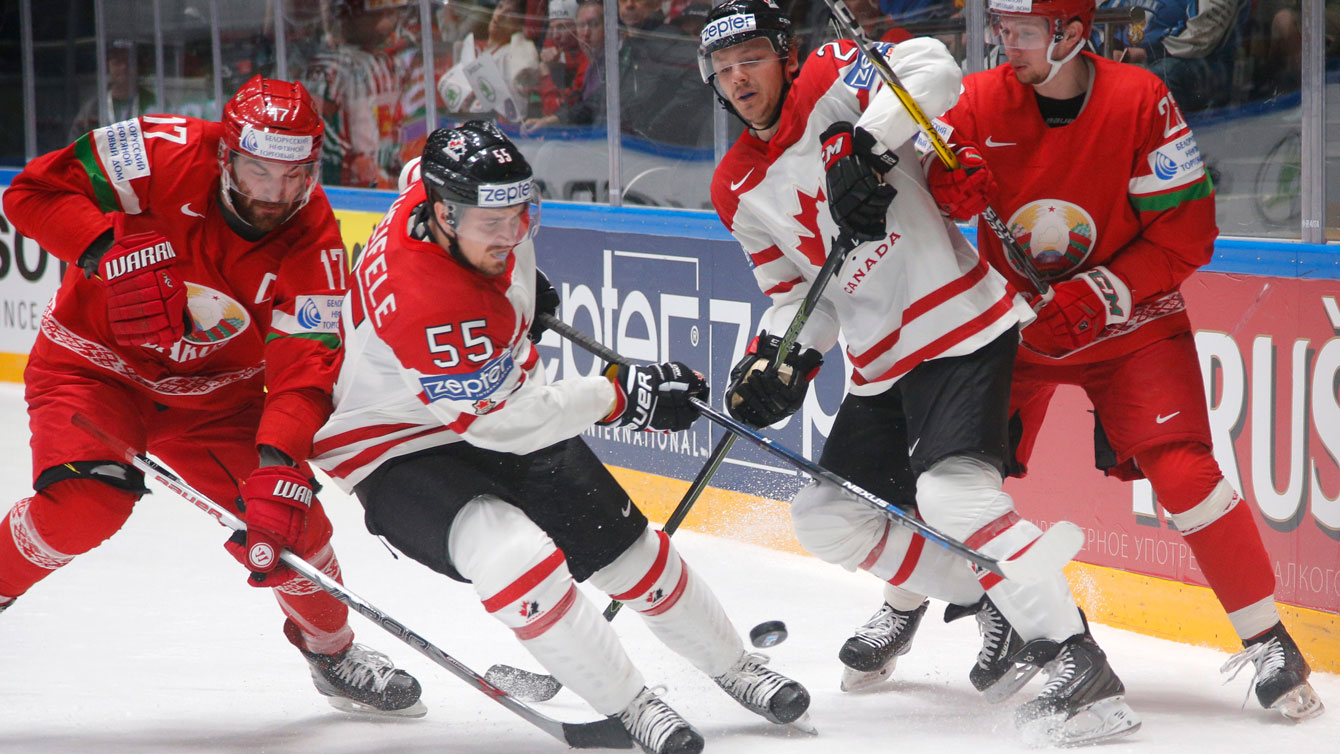 Mark Scheifele and Sam Reinhart fight for the puck at the Hockey World Championships in St.Petersburg, Russia, on May 9, 2016. (AP Photo/Dmitri Lovetsky)

In the third period, Duchene and Mark Scheifele helped O’Reilly to his second goal. A steal from Stone allowed him to make a pass to Scheifele who returned the puck, allowing Stone to finish the play with Canada’s seventh goal. Michael Matheson brought the final score to 8-0, after a power play assisted by Brenden Gallagher and Connor McDavid.

Cam Talbot saved a total of 13 shots, giving Canada its first shutout of the tournament.

The Canadians were the first to score, with a power play by Mark Scheifele assisted by Mark Stone and Connor McDavid. Team Captain and two-time Olympian Corey Perry followed up the nation’s second goal, with the help of Derick Brassard and Taylor Hall. Eight minutes later Istvan Bartalis put Hungary on the board, narrowing Canada’s lead to one point at the end of the first. 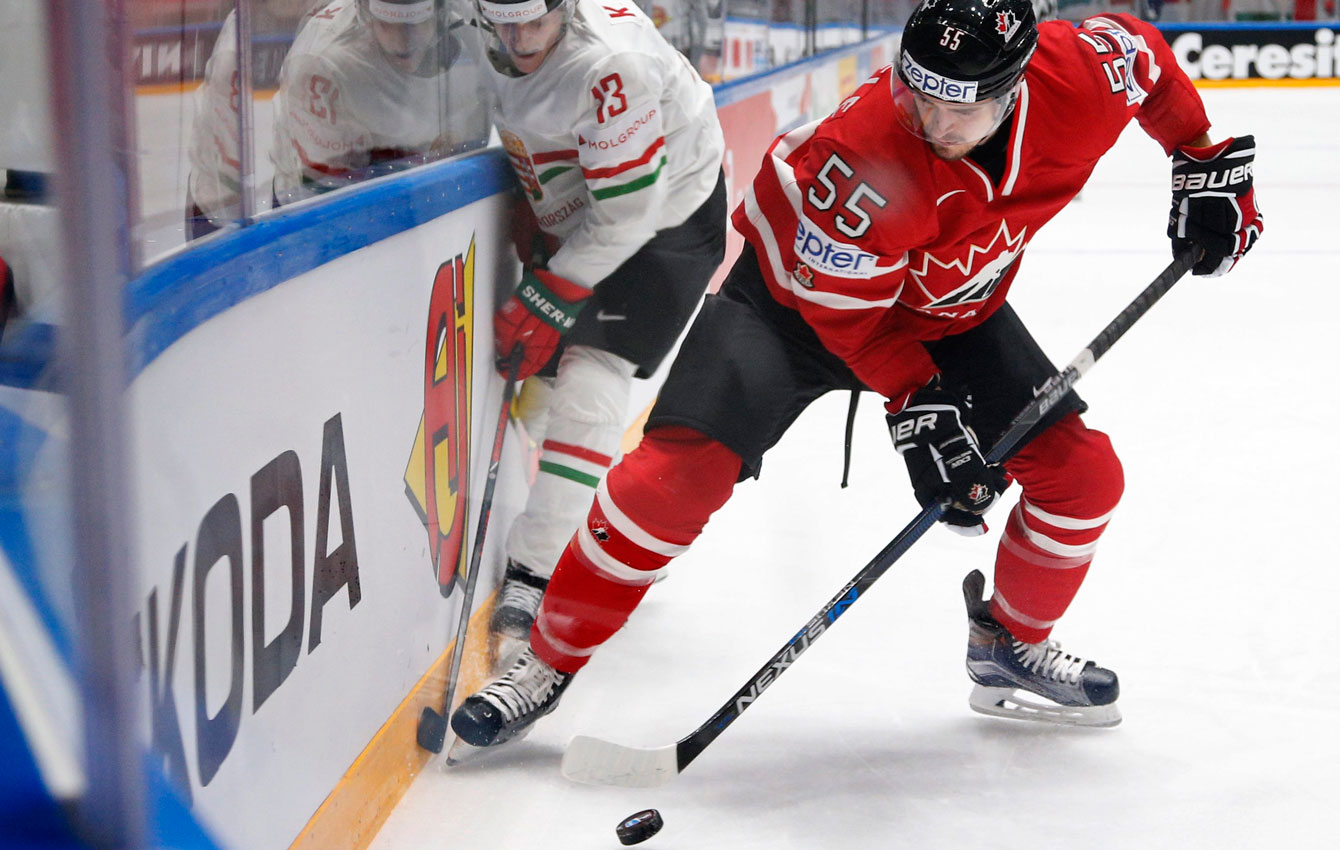 Mark Scheifele fights for the puck at the Hockey World Championships in St. Petersburg, Russia on May 8, 2016. (AP Photo/Dmitri Lovetsky)

In the second, Hungary was no match for Canada, whose team scored four goals in just over five minutes. Stone was the first to score, before Brad Marchard added another goal, which boosted the score to 4-1 for Canada. Brassard scored his first goal of the tournament at the 11:36 minute mark. Michael Matheson closed the scoring in the second sending Canada into the final period up by five. 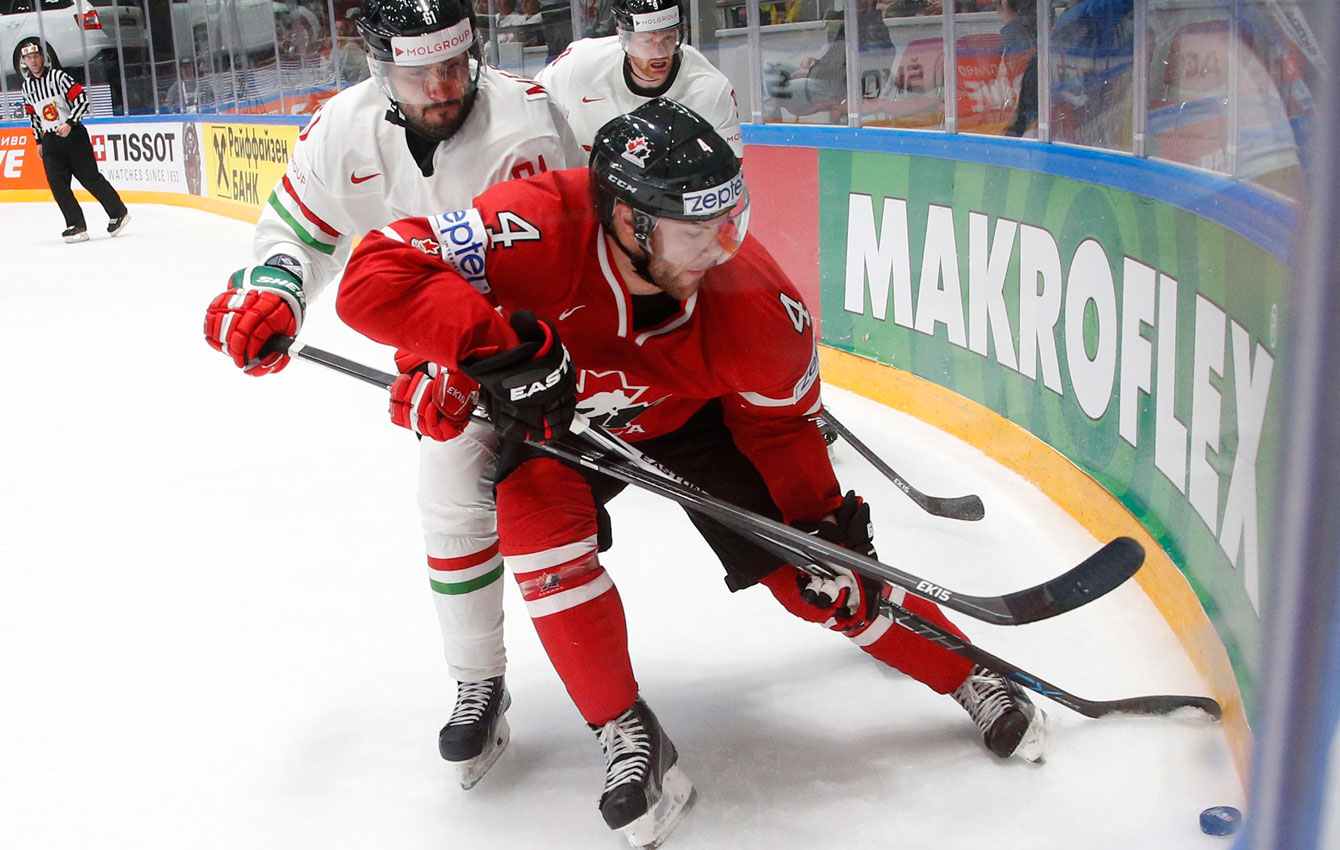 Taylor Hall during the Hockey World Championships on St. Petersburg, Russia, on May 8, 2016. (AP Photo/Dmitri Lovetsky)

Hall extended the nation’s lead in the third with an assist from Matheson, which brought the final score to 7-1 for Canada. Next up, the Canadians will play Belarus on Monday in game three.

in the first round on Friday in St. Petersberg, Russia.

After nearly five minutes of play, Patrick Maroon put the United States on the board with a power play goal, but from then on it was all Canada. The nation responded quickly with a its first goal of the tournament by Taylor Hall, assisted by Derek Brassard and two-time Olympian Corey Perry. Brendan Gallagher sent another shot past American goaltender Keith Kinkaid with the help of Ryan O’Reilly to give Canada a 2-1 lead going into the second. 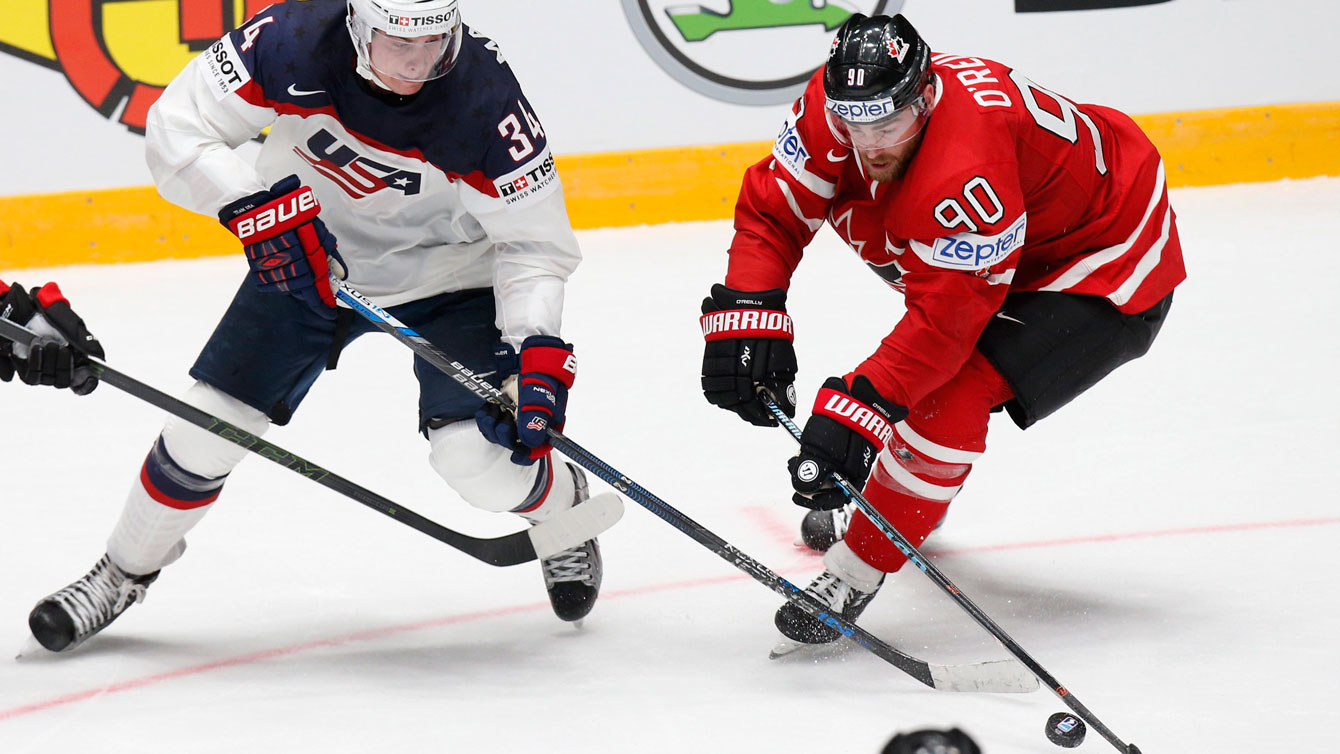 Ryan O’Reilly at the Hockey World Championships in Petersburg, Russia on May 6, 2016. (AP Photo/Dmitri Lovetsky)

Sochi 2014 Olympian Matt Duchene, scored the nation’s only goal in the second. His shot was assisted by Cody Ceci and Ryan Murray. Boone Jenner opened scoring in the third, beating Kinkaid, after being setup by O’Reilly to put the Canadian up 4-1. Duchene helped Brad Marchand to a short handed goal, extending the lead to 5-1 before Canada claimed its first victory of the tournament. 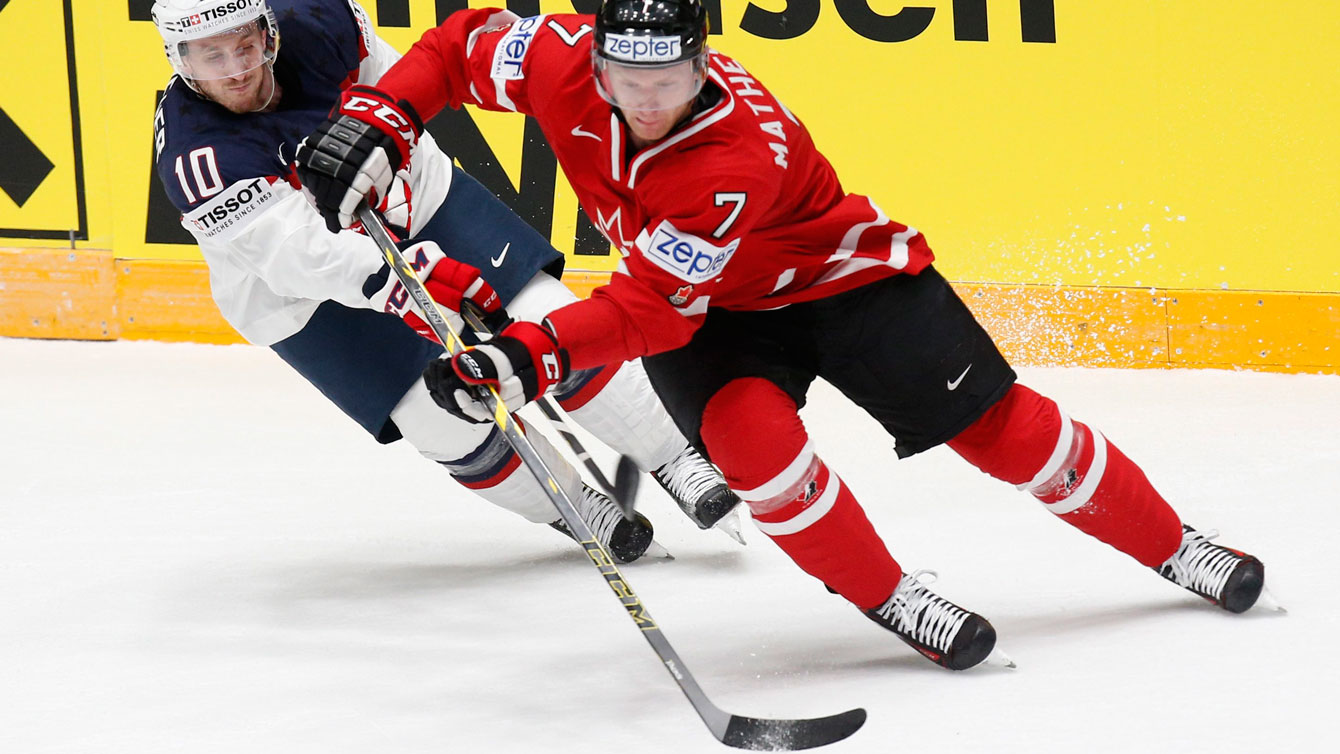 Michael Matheson holds off Jordan Schroeder of the United States at the IIHF World Championships in St.Petersburg, Russia on May 6, 2016. (AP Photo/Dmitri Lovetsky) 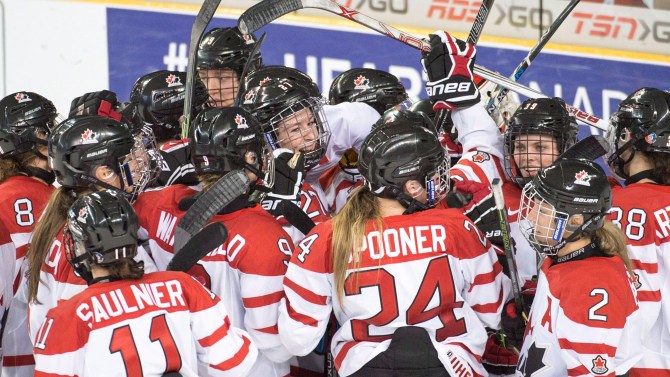 Canada will look to repeat its success form last year, where the team went undefeated before taking home the 2015 IIHF World Championship title. Next up, the Canadians will face off against Hungary on Sunday.