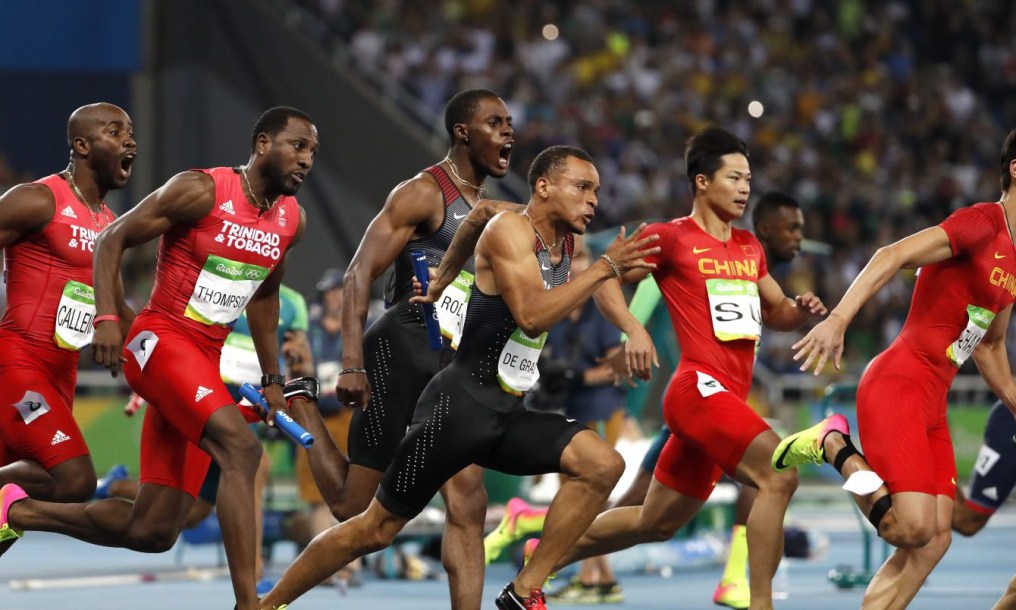 “Records are made to be broken,” Bruny Surin tweeted about an hour before the men’s Olympic 4x100m relay final at Rio 2016. “Own the track and claim your spot in Olympic history,” he advised.

It’s unlikely that Akeem Haynes, Aaron Brown, Brendon Rodney and Andre De Grasse were checking Twitter prior to their race, but breaking a record and obtaining a piece of Olympic lore is exactly what they did. 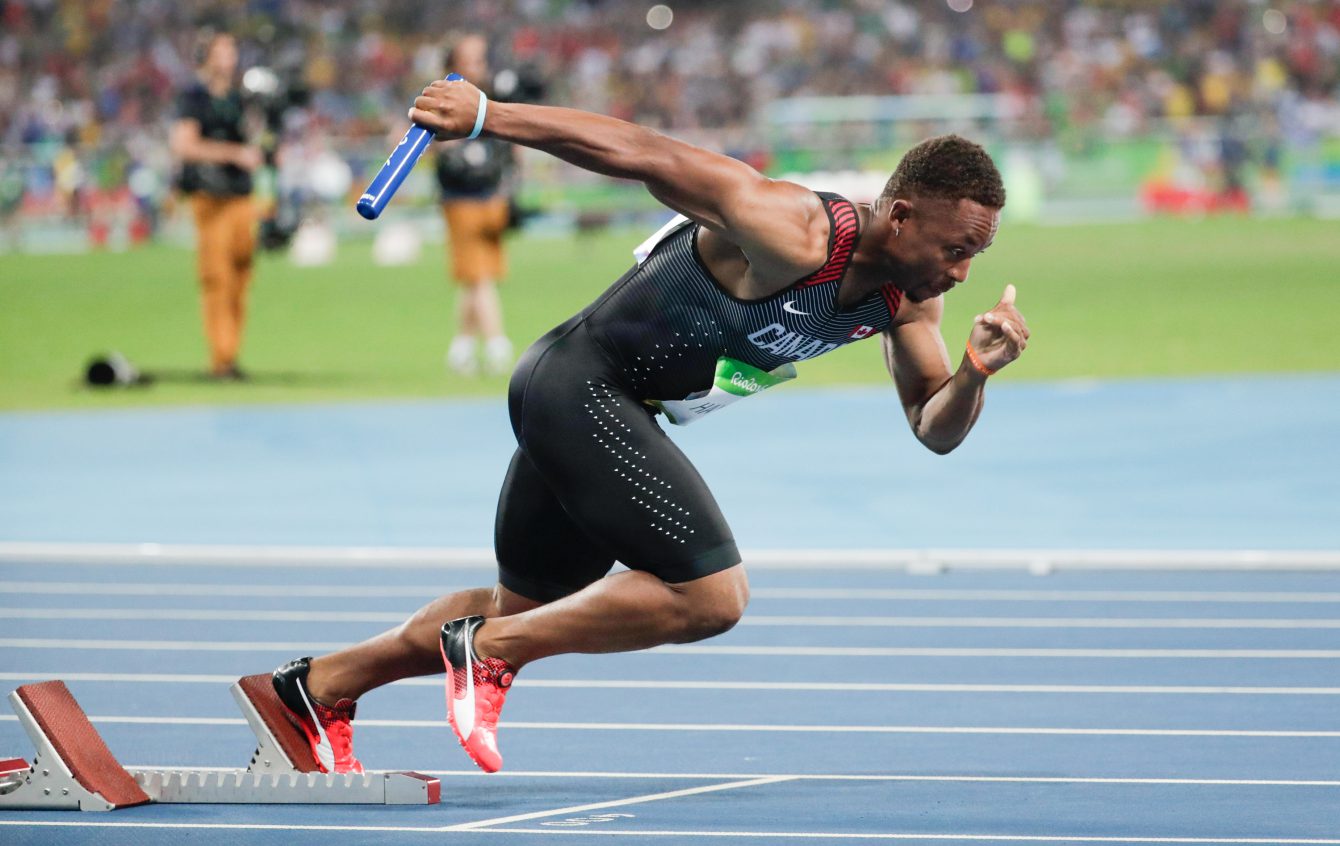 The foursome lowered the old Canadian 4x100m relay record to 37.64 seconds from 37.69, and once the United States was judged to have violated baton exchange rules, they had made a bit of history in becoming just the third Canadian squad to win a medal at this event.

“We were doing an interview,” Brown said, “we were looking at the race on the video and talking about getting fourth with a national record. And it turns out we got bronze, so that changed our reactions a lot.”

Unfortunately, Canada didn’t get to celebrate its bronze medal on the track as the video boards in the stadium showed USA to be the third place team. The Americans – Mike Rodgers, Justin Gatlin, Trayvon Bromell and Tyson Gay – were taking the bronze lap of honour draped in the stars and stripes, while Canadian runners were trying to live with a narrow fourth place and national record. 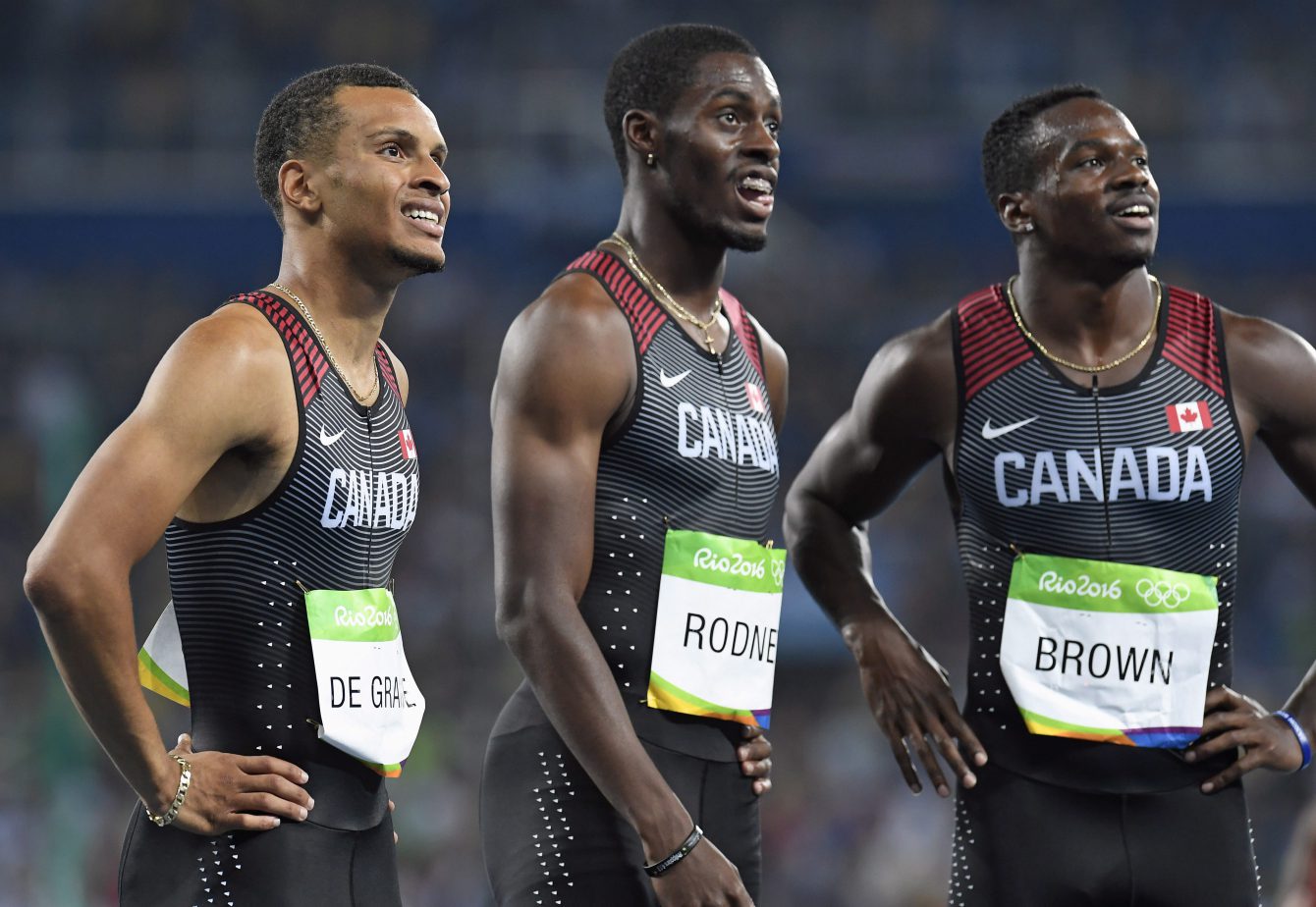 “We were more upset about the fourth place finish,” Haynes said, taking a mature perspective when asked if the team felt robbed of their celebration. “When we got third, we were still waiting to see if it was legit. I mean, as long as we got the medal that��s all that matters.”

Haynes’ sentiments were echoed by De Grasse saying, “we definitely wish we could have had a victory lap, but we didn’t even know where the flags were (when they got third), but again, I guess we didn’t want to do (the lap) because we were just waiting to see if it actually came true.”

Haynes was one of the two changes from the team that won world championship bronze in Beijing last year. He assumed Justyn Warner’s former role in the squad after showing better at Athletics Canada’s national trials. The other change was the placement of 100m/200m individual Olympic medallist De Grasse. At worlds, Canada’s fastest man ran the second leg. In Rio, he was the anchor. 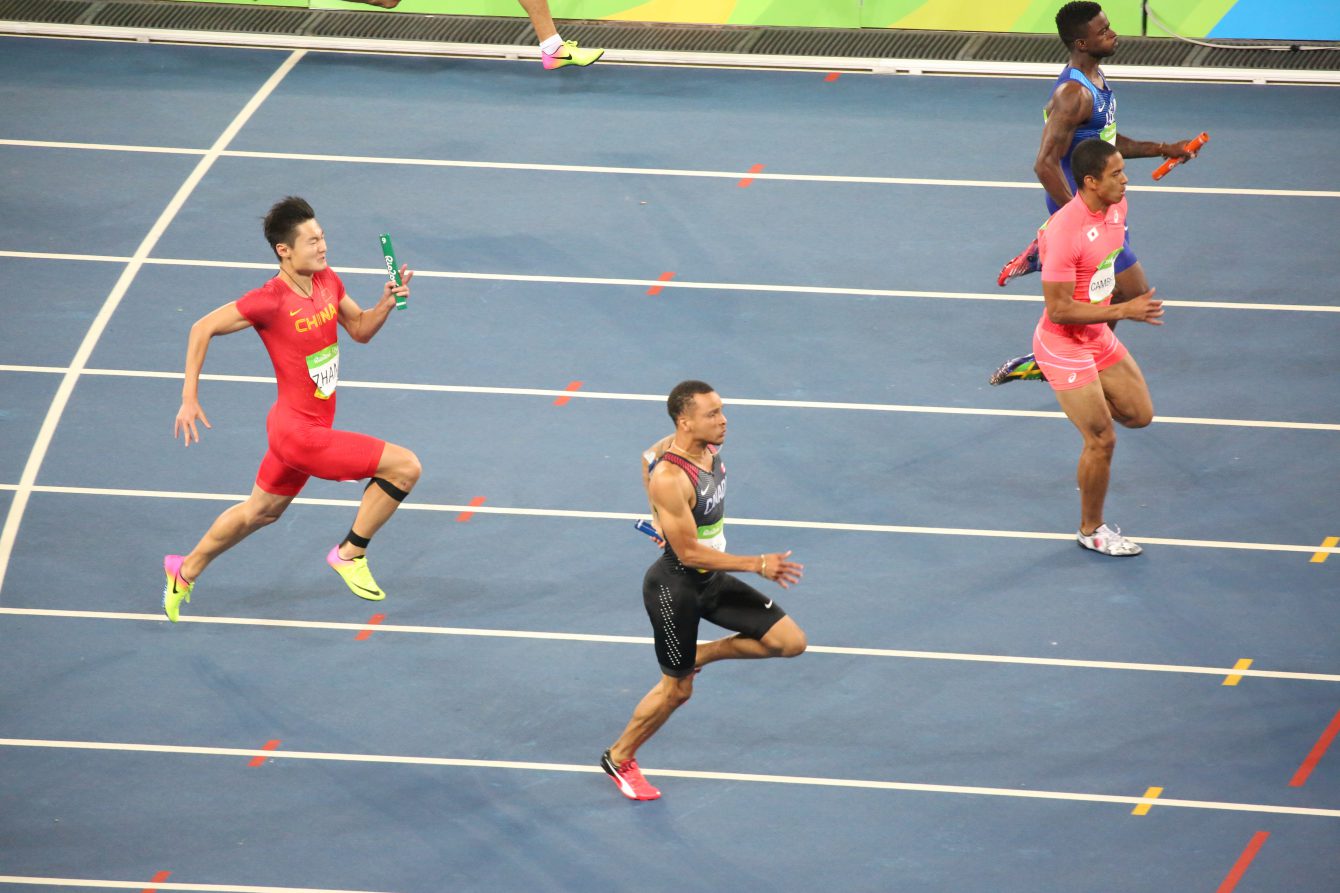 “I think I just needed one more metre,” De Grasse said. “I don’t know what happened, I think my legs we’re just a little bit fatigued from running the rounds in the 100s and 200s.”

De Grasse ran six rounds of sprints in one week prior to the relay final: qualifying heats, semifinal and final of each distance in the 100m and 200m on his way to a podium in both. He became the 11th man in history to win 100m/200m/4x100m medals at the same Olympic Games.

Usually De Grasse ran the second leg in the 4x100m, giving himself a bit more of the track and handing off to the third man with Canada usually in a stronger position. In Rio running fourth, De Grasse had to make up a lot of ground over a shorter distance to get on the podium, something he nearly pulled off before the U.S. disqualification. 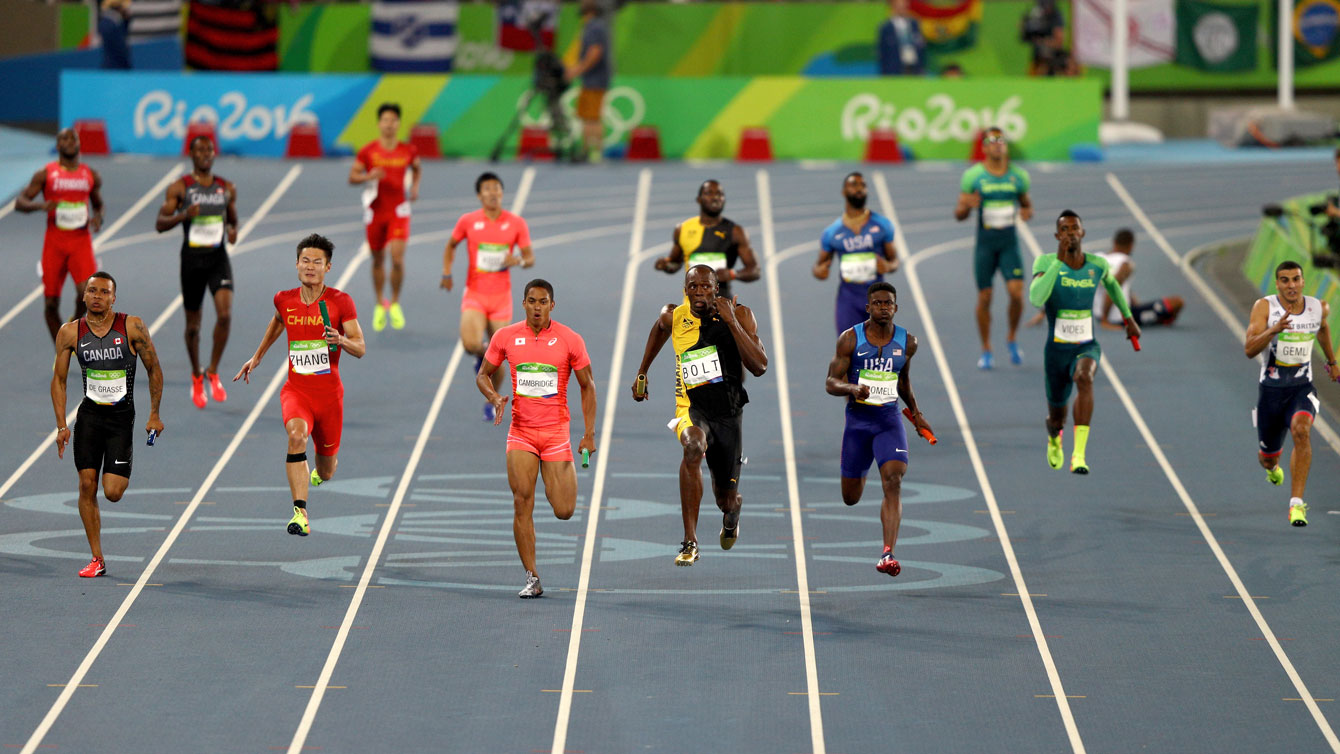 “I probably only had 97 (or) 98 metres in that race and those 2 metres could have made the difference between a fourth place finish and a silver medal.”

The way De Grasse had closed down the American and Japanese anchors (he acknowledged “Bolt was already gone” for Jamaica), one wouldn’t put it past the Canadian to do more with very little additional space. The U.S. time was 37.62 and Japan ran 37.60.

The new record has added significance for Team Canada as one of the men who helped set the old one in Atlanta to which Surin referred in his tweet, now coaches the relay team. 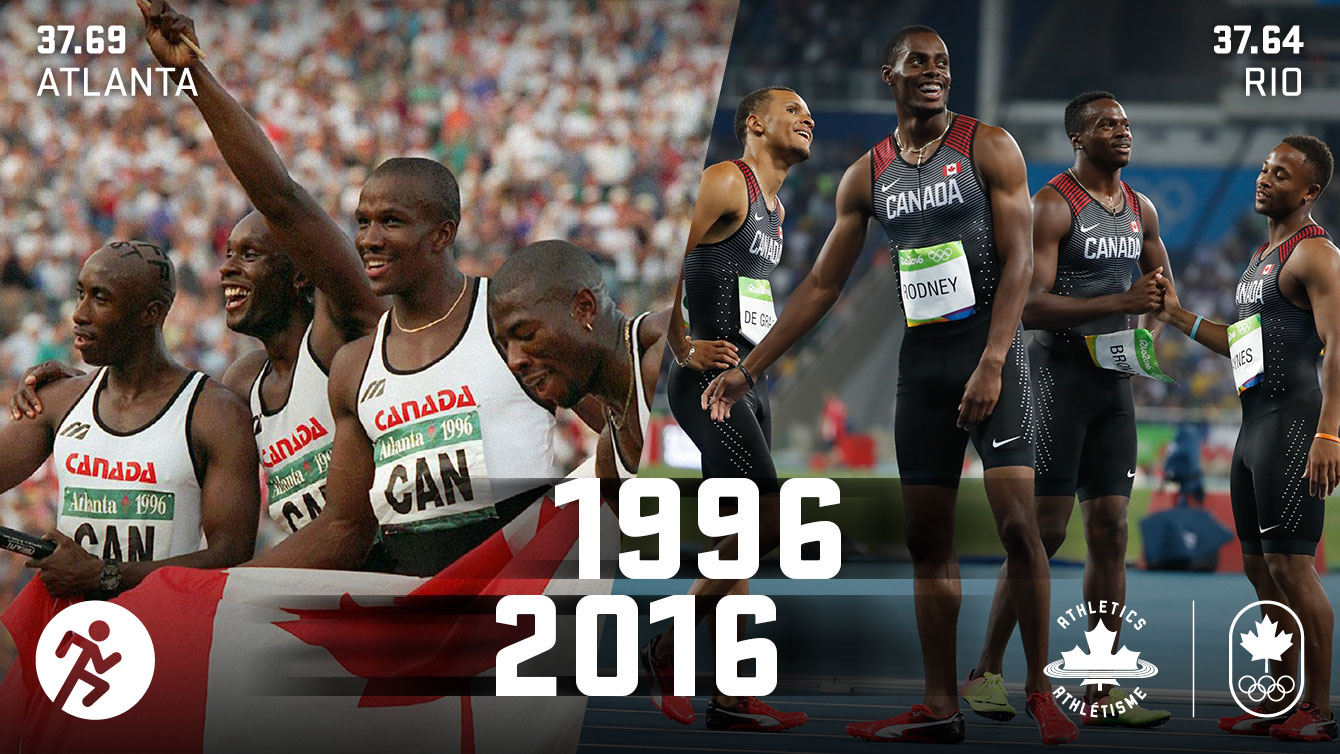 Glenroy Gilbert, running second in that golden 1996 squad with Robert Esmie, Surin and then world’s fastest man Donovan Bailey, puts Canada’s relay teams through its paces in baton exchange. He’s widely considered one of the best in this field. On Friday, 20 years and 16 days from the night Canada ran 37.69, a new record emerges through Gilbert’s students.

“Gelnroy is our coach and he’s the one that ran it, so we’ve been wanting to break it, and there’s no better place to break it than the Olympics,” Brown said. “It’s the 20-year anniversary, so it’s about time we talk that off.”

Rodney, who has become a fixture on the third leg of the 4x100m relay team, praised his teammates saying, “you can’t really complain when you’ve got a guy running 9.9/9.8,” of De Grasse. “We did a great job and I’m proud of all three of these guys.” 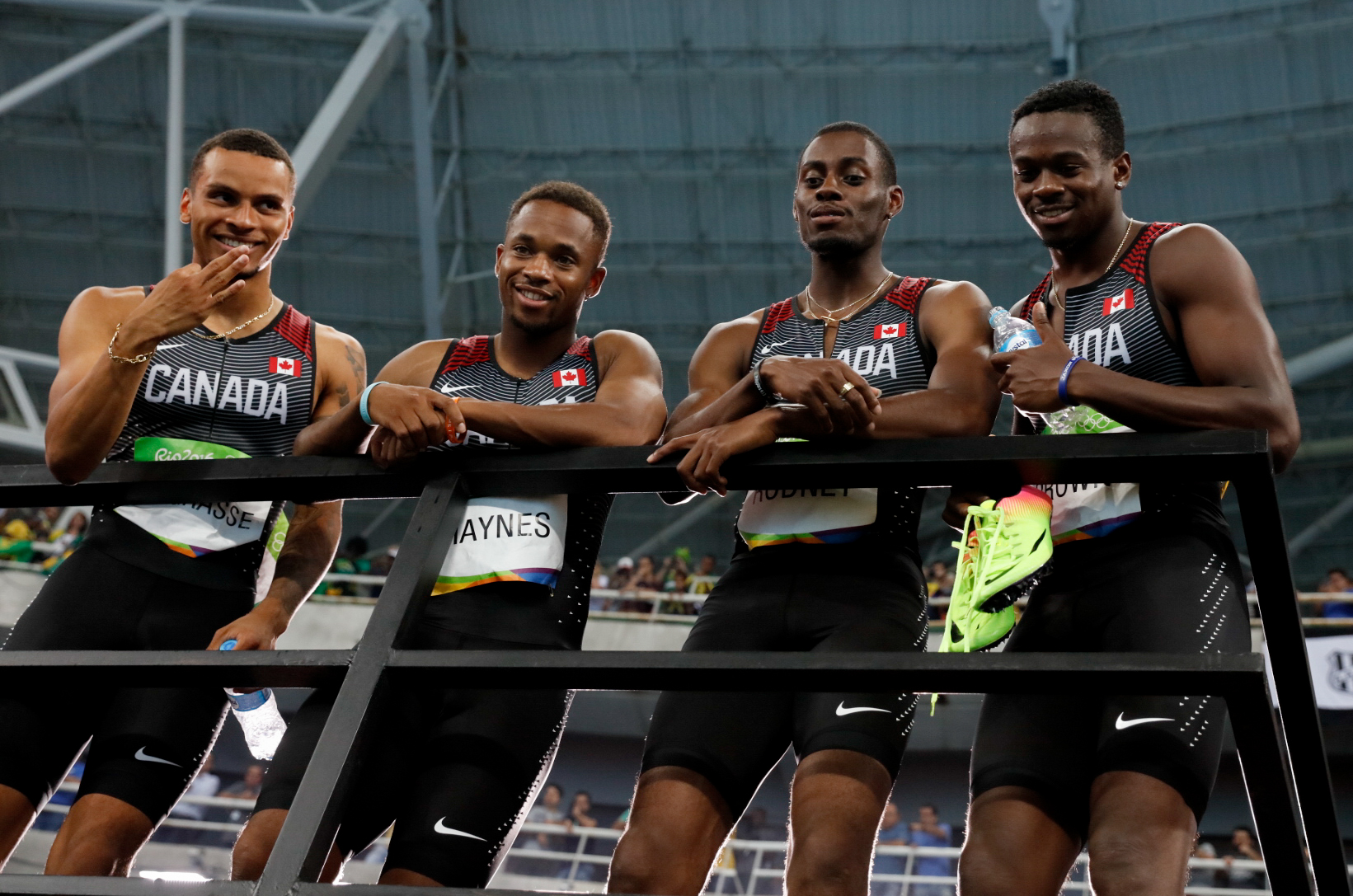 Canada got to the final with Bolade Ajomale running the anchor leg of the semifinals, brought to Rio specifically with De Grasse’s packed schedule in mind. Rodney didn’t forget his contribution.

“Our young guy, Bolade, stepped in yesterday and did his job.”

As the lead-off runner, Akeem Haynes helped Canada break a 20-year-old national record to win bronze in the 4x100m relay...