Canada and Russia will meet once again in 2019 at the World Junior Championship when they face each other in their final preliminary game. Both teams are undefeated so far in the tournament, but only one can sit atop Pool A by the end of the night.

Without further adieu, here are some of the most memorable Canada-Russia hockey moments:

Because of the NHL lockout, the Canadian team was a true super squad, featuring the likes of Sidney Crosby, Patrice Bergeron, Ryan Getzlaf, Jeff Carter and Dion Phaneuf. Of course, the Russians were no slouches either, with Alex Ovechkin and Evgeni Malkin suiting up. Canada won the final, 6-1, for its first world junior title since 1997 and starting a five-year win streak.

To celebrate the 100th anniversary of the IIHF, the world championship was hosted by Canada for the first time ever. In a near-perfect scenario, Canada advanced to the gold medal game to face their storied rivals. Canada was up 4-2 before Russia tied it in the third period, sending the game to overtime. With Rick Nash in the box on a delay of game penalty, Ilya Kovalchuk scored the winner, giving Russia its first world title since 1993 and keeping Canada from a storybook ending.

It was the game that made Jordan Eberle a national hero. After a back-and-forth game, Russia took a 5-4 lead with 2:20 to go in the third period. But all hope was not lost. With the goaltender out and an extra attacker on, Eberle scored the game-tying goal with just five seconds to play. After a scoreless overtime, a shootout would decide who would go on to play for gold. Once again, Eberle came through in the clutch, scoring the winner, allowing Canada to go on to win its fifth straight title.

Things were looking good for Canada, up 3-0 heading into the third period. But then the Russian attack became relentless, resulting in five unanswered goals and the gold medal, Russia’s first since 2003.

After Canada won gold at home in Vancouver, the Russians hoped for the same in Sochi. But it was not to be, as Russia lost its quarterfinal against Finland. Instead it was Canada that proceeded to win its second straight gold. 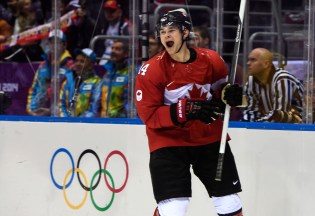 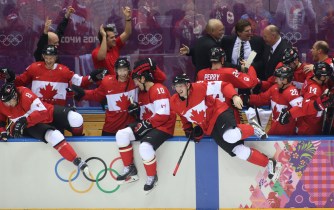 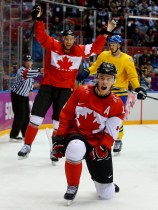 Playing in front of a home crowd in Toronto, Canada defeated Russia 5-4 in the gold medal game to win its first world junior title since 2009.

The final game of the tournament wasn’t even close, with Canada defeating Russia 6-1. With the win, Crosby joined the Triple Gold Club of Stanley Cup, world championship and Olympic champions.  The tournament would also finalize seeding for the 2018 Olympic Winter Games, making Canada the top-ranked team heading into PyeongChang.

Of course, before there was an independent Russia, there was the Soviet Union, against which Canada enjoyed some of its greatest hockey moments:

The three-game final was tied at two games apiece. The third game of that final was also tied 5-5. And then Wayne Gretzky and Mario Lemieux combined for one of the greatest goals in Canadian hockey history.

Back then, the tournament was held completely in a round robin format. The team with the best overall record would take the gold. Canada had four wins, one loss and one tie heading into its final game against the Soviets, who had five wins and one tie, which came the day before when Finland did Canada a huge favour. After the Soviets tied the final 2-2, John Slaney played the unlikely hero, scoring the goal to secure the gold with 5:13 to play. In Saskatoon, Canada became the first country to ever win the world juniors at home.

At the height of the Cold War, it was the first true best-on-best international competition, as Canada’s top professionals took on the Red Army. Each team had three wins and one tie as the eight-game series concluded in Moscow. In that final match, Canada came back with three goals in the third period, the last one with just 34 seconds to play, courtesy of Paul Henderson.