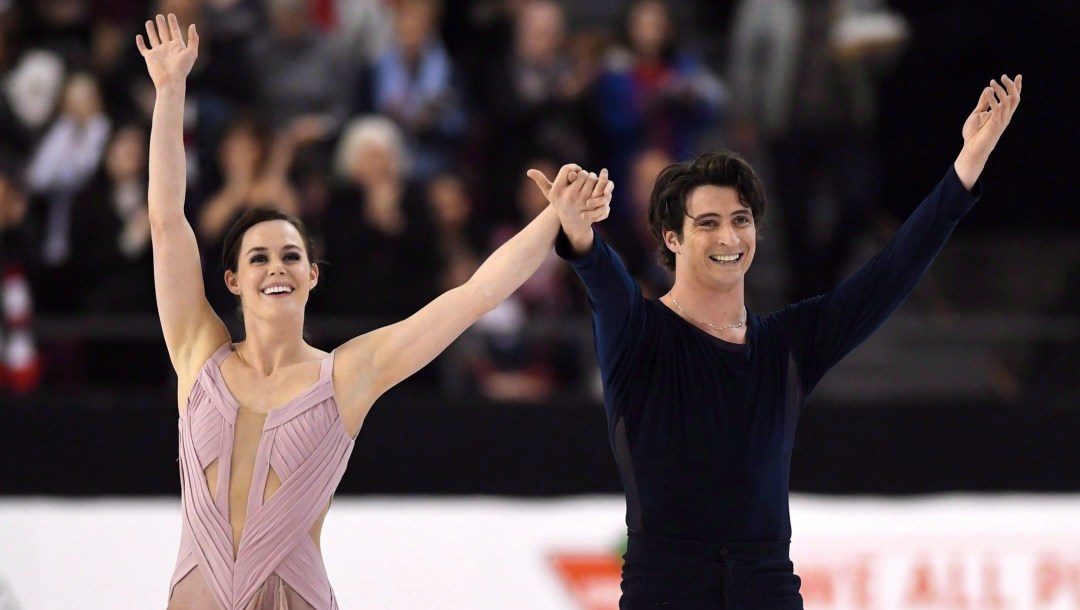 Canada is sending one of its strongest teams ever to the ISU World Figure Skating Championships, taking place this week in Helsinki.

The last time the worlds were held in the Finnish capital in 1999, Canada’s lone medal was the ice dance bronze by Shae-Lynn Bourne and Victor Kraatz. This year, hopes are high for more hardware thanks to a season full of highlight performances.

But these worlds are not just about the medals. Olympic qualification is also on the line. The worlds are where countries try to earn as many entries as possible for PyeongChang 2018, up to a maximum of three per discipline. To figure it out, a country’s top two results are added up. Anything totaling 13 or less (such as a 1st and a 12th or a 6th and a 7th) is worth three Olympic berths in that discipline. Results adding up from 14 to 28 will earn two berths. Suffice to say, depth is important.

Today we preview the dynamic duos of ice dance and pairs.

“To be perfectly frank, I think this is probably the most prepared we’ve been for a world championships, arguably in our whole career.” – Scott Moir

“We’re just riding this out and loving this feeling of being healthy, ready and eager to compete.” – Tessa Virtue

It would be the most incredible climax to their comeback season if Tessa Virtue and Scott Moir could capture their third career world title. Away from competitive ice for two seasons, they admit to being surprised by the world record scores they’ve received. But with two crowd- and judge-pleasing programs and a top-notch training environment, it really shouldn’t be that shocking.

They say they feel invigorated and motivated, in part by the six other teams at their rink who are headed to the worlds, including their main challengers for gold, Gabriella Papadakis and Guillaume Cizeron. It was the French duo who rose to the top of the ranks while the 2010 Olympic champions watched from the stands and were awed. With both teams exhibiting great artistry, the difference is likely to come on the technical side, where one missed edge or bad turn could be the deciding factor.

Having won back-to-back world medals in 2014 and 2015, Kaitlyn Weaver and Andrew Poje want back onto the world podium after falling to fifth last year. It’s been a season of transition and learning, as they worked under a new coach on two continents, experimenting and reinventing. Their Michael Jackson-inspired short dance is like nothing they’ve done before. For the free dance, they’ve challenged themselves to stand out while skating to one of the sport’s more oft-used music selections and succeeded.

Piper Gilles and Paul Poirier are a team on the rise. Eighth last year, they’re always trying something different and just a little outside the box. While hip hop was a popular choice to be paired with this year’s required short dance rhythm, the blues, they went for full on disco fun – bell bottoms, mustache, and ‘fro included. They back it up with a smooth and sophisticated tango in the free dance.

“I think we’re coming in a little more under the radar. There are teams that have put up higher scores and better performances and that worked well for us last year so here’s hoping it works well for us again.” – Eric Radford

“We kind of went back to square one on the drawing board after Four Continents, re-assessing what’s gone on this season… We really worked on analyzing these details with our coaches and choreographers.” – Meagan Duhamel

It’s been a confusing season for Meagan Duhamel and Eric Radford, one that played with the confidence of two-time reigning world champions. They spent the early part of the season trying to integrate the throw triple Axel – an element they had to learn completely from scratch – into their short program. But with only one successful outing, and with the point value not worth the risk, they swapped it out for the much stronger throw triple Lutz. But the Four Continents Championships presented another curveball. Jump issues abounded, including Radford falling on his triple Lutz in the short program for the first time in no-one-can-remember-when.

Ahead of the worlds, they’ve made some changes, altering the entrances to those jumps to achieve better flow and better unison. Most of all, they worked on freeing up the long program, which goes hand in hand with their confidence level in the technical elements, which Radford says are at their highest consistency and greatest ease all season. It’s taken longer than usual, but they’ve reached the point of feeling relaxed and seamless. And if the last two years are any indication, they know how to peak at the biggest event.

They’ll also have plenty of family to cheer them on thanks to Duhamel’s Finnish heritage. Her 84-year-old maternal grandmother is headed to her homeland for the first time in almost two decades where there are aunts, uncles and cousins ready to wave the maple leaf.

In not so great news, however, reports on Tuesday indicated that Radford was dealing with a muscle injury in his hip that was affecting his ability to do the triple Lutz. He was hopeful that some physiotherapy would make him fully ready to compete.

Julianne Séguin and Charlie Bilodeau last competed at the Grand Prix Final in December. They had a forced break when Seguin sustained a concussion over Christmas. After a month off the ice, she gradually returned and they feel they reacted the best way possible, working on things they couldn’t during their regular competition schedule. With a Grand Prix gold to start the season, Canada’s team of the future is already making an impact.

It took a couple of seasons, but Lubov Ilyushechkina and Dylan Moscovitch have found their identity as a pair. Seventh last year, they got their first Grand Prix medal at Skate Canada in October. Much will depend on jump consistency, but there is always something special about the strength and stability he provides so that she can achieve the most unique lift positions.

CBC will have complete live streaming of the competition with nightly highlight shows on the broadcast network.

Tomorrow we’ll take a look at the men and the women.