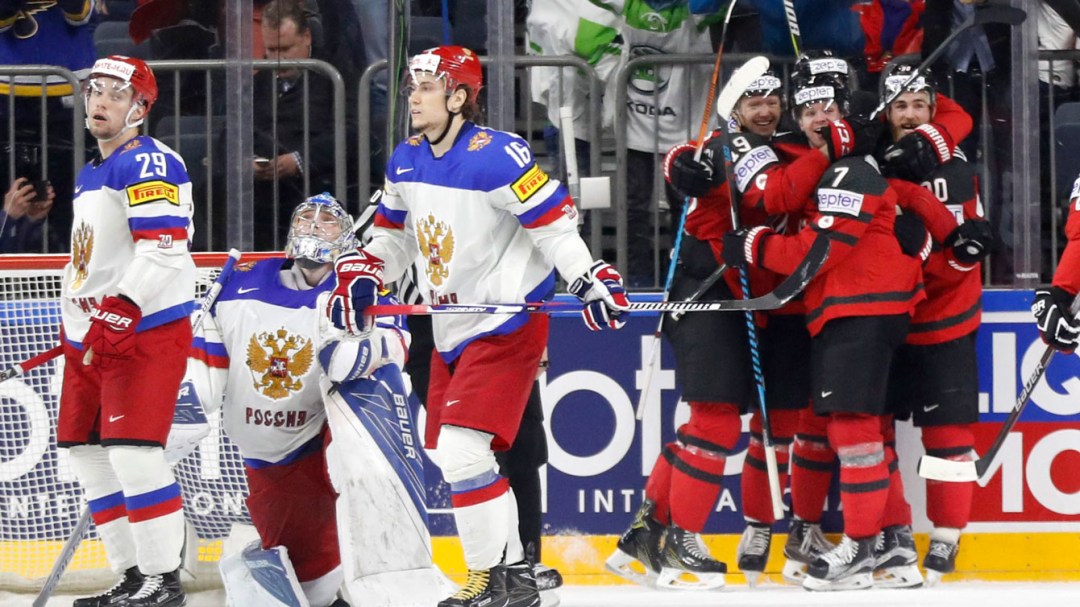 Canada’s quest for a third consecutive IIHF World Championship title is on with a come-from-behind 4-2 semifinal win over Russia in Cologne, Germany on Saturday.

Four third period goals via Mark Scheifele, Nathan MacKinnon, the winner from Ryan O’Reilly, and an empty netter by Sean Couturier allowed Canada to reverse a 2-0 deficit through 40 minutes en route to Sunday’s final. O’Reilly’s winner – his fifth goal of the 2017 worlds – came with 3:02 left in the third period of a game that saw huge momentum swings. 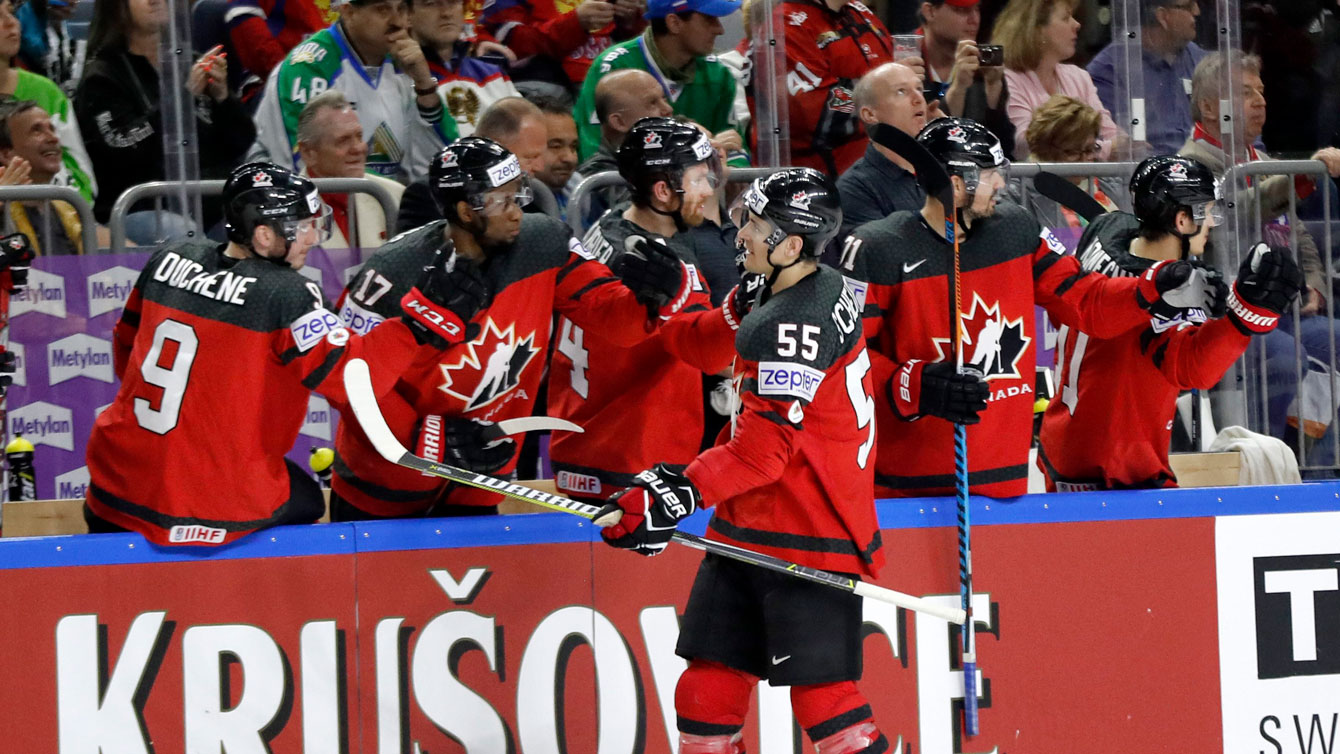 Canada’s Mark Scheifele celebrates his goal against Russia at 2017 IIHF worlds semfinals on Saturday, May 20, 2017 in Cologne, Germany.

Canada outshot Russia 11-7 through a quick first period, where both Andrei Vasilevski in the Russian net, and Calvin Pickard holding the line for Canada, kept the game scoreless through the opening 20 minutes. The rest of the game wouldn’t be quite so smooth for either side.

The second period was slowed significantly by early penalties, with Canada killing a couple of power plays – three in total up to this point – before Russia’s Anton Belov saw a minor and a 10-minute misconduct for a check to the head. Two more offsetting minors followed seconds later.

Unable to make most of the Belov punishment, Canada soon fell behind 1-0 on even strength. The North Americans couldn’t deal with Russian pressure, conceding at the 12:16 mark, when Yevgeni Kuznetsov beat Pickard glove side on a pass from tournament leading scorer Artemi Panarin. 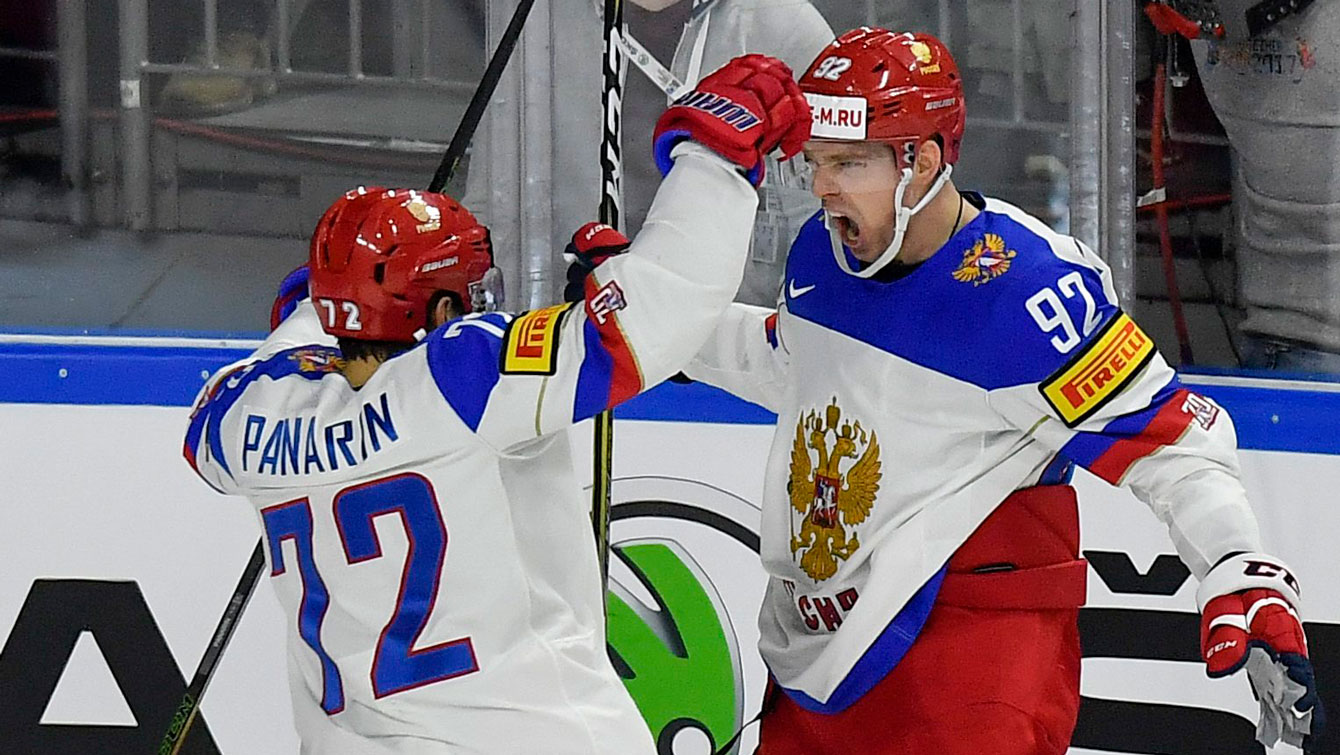 Yevgeni Kuznetsov (right) celebrates his goal against Canada in the 2017 IIHF worlds semifinals on May 20, 2017.

Another altercation with just over six minutes left in the second had a slashing minor assessed to Canada, putting Russia back on a man advantage. Canada had hoped to limit Russia to just three power plays, knowing that its powerful offence couldn’t be given too many looks. The Canadian view was correct, as on its fourth power play Nikita Gusev gave Russia a 2-0 lead, the puck landing behind Pickard at 14:50 of the second period. Panarin, who assisted on the opening goal, had a second helper as the Russians put on a passing clinic before Gusev’s goal.

Desperate to get back in the game and with 31 seconds of its second power play to work with at the start of the third period, Canada finally got on the board with Mark Scheifele tipping one past Vasilevski. A hard pass from Nathan MacKinnon found Scheifele in position to convert, making it 2-1 Russia just 17 seconds into the third. MacKinnon, Canada’s top scorer at the worlds, picked up his 13th point in nine games.

A parade of Russian penalties followed Canada’s first goal, with Belov again taking a cross-checking minor to start the first of three full two-minute power plays for Canada over a 10-minute duration from 1:30 of the third period. Canada couldn’t capitalize on any of these chances (one for five in the power play in the game), but the sun was far from setting on the two-time defending champions. 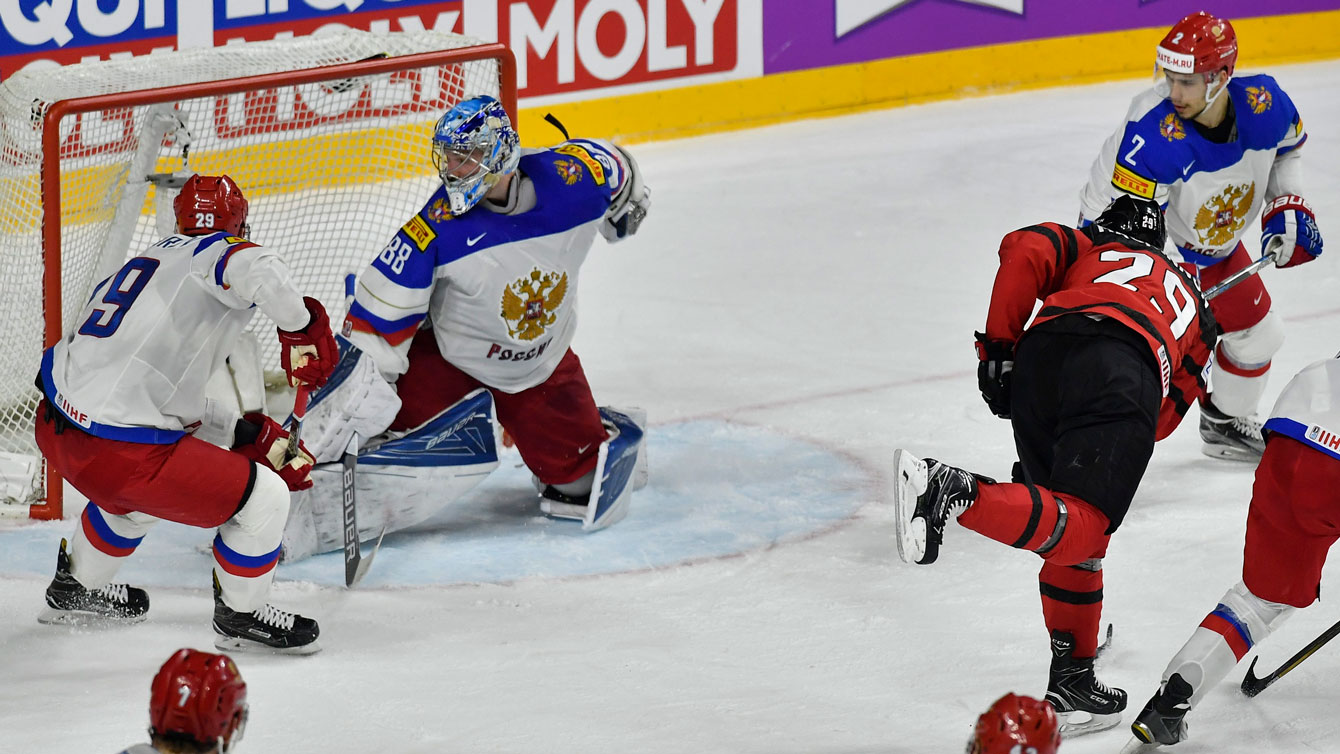 Nathan MacKinnon slaps a wrist shot to level the game 2-2 against Russia at 2017 IIHF worlds semfinals on Saturday, May 20, 2017 in Cologne, Germany.

Canada finally pulled level 2-2 at 15:07 of the third when MacKinnon stubbornly regained a lost puck before sending a low wrist shot past Vasilevski’s right leg as the Russian goaltender was sliding away from his near post.

Despite a wasteful third period, Canada found itself on the front foot with Russia pinned in its own zone. With just over three minutes to play, O’Reilly took a pass from Mike Matheson and rushed to the net. Somehow through a maze for sticks and legs, the puck returned to O’Reilly’s blade and he buried it glove side past Vasilevski to put Canada ahead 3-2.

With Vasilevski out of the net to give Russia an extra attacker, Couturier put the game to rest on an empty net goal with 1:07 remaining for the 4-2 final. 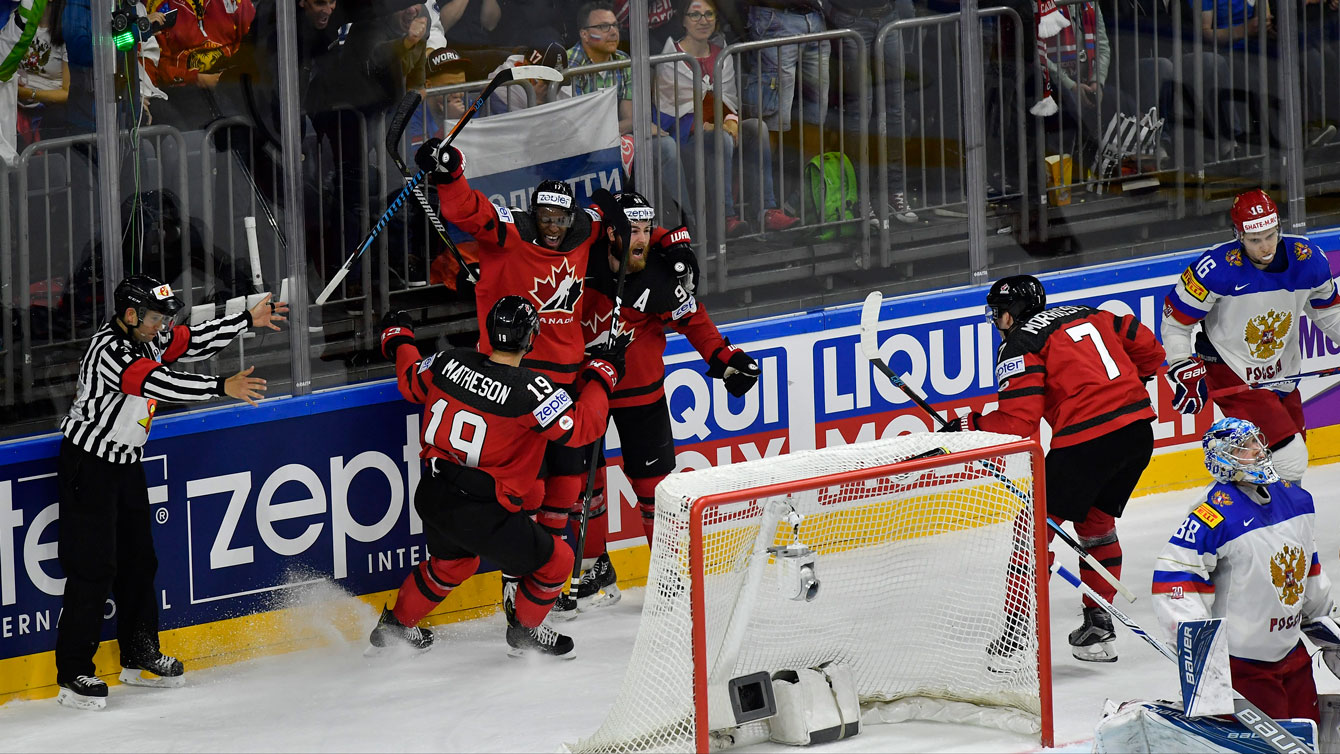 Canadian players celebrate Ryan O’Reilly’s (on the right with ‘A’ on his sweater) game winning goal against Russia at 2017 IIHF worlds semfinals on Saturday, May 20, 2017 in Cologne, Germany.

MacKinnon’s goal was his sixth of the tournament, he now has 14 points heading into Sunday’s final, which will be against either Sweden or Finland. Canada beat Finland 2-0 last year to win its second straight and 26th IIHF men’s world title.

O’Reilly assisted on Couturier’s empty net goal to give him two points on the day, as did Colton Parayko, who also got on the score sheet twice on Saturday, helping to set up Scheifele earlier. 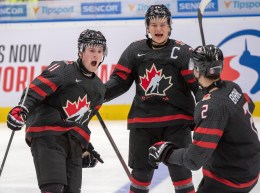 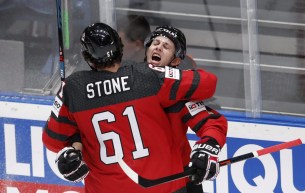