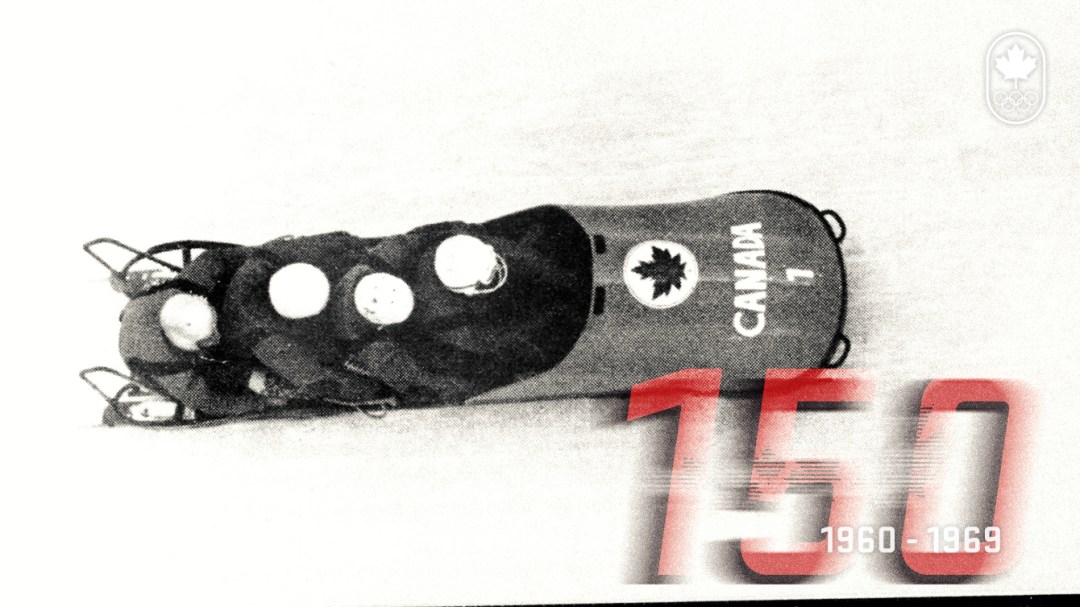 As Canada’s sesquicentennial celebration continues on Olympic.ca, we reach a decade often marked as a time of transformational change – which most definitely holds true in the world of sport.

If you want to look back before you look forward, you can find previous installments of our Canada 150 series here.

But now it’s time to tackle the 1960s, which featured many moments in which Canadian athletes shone bright. 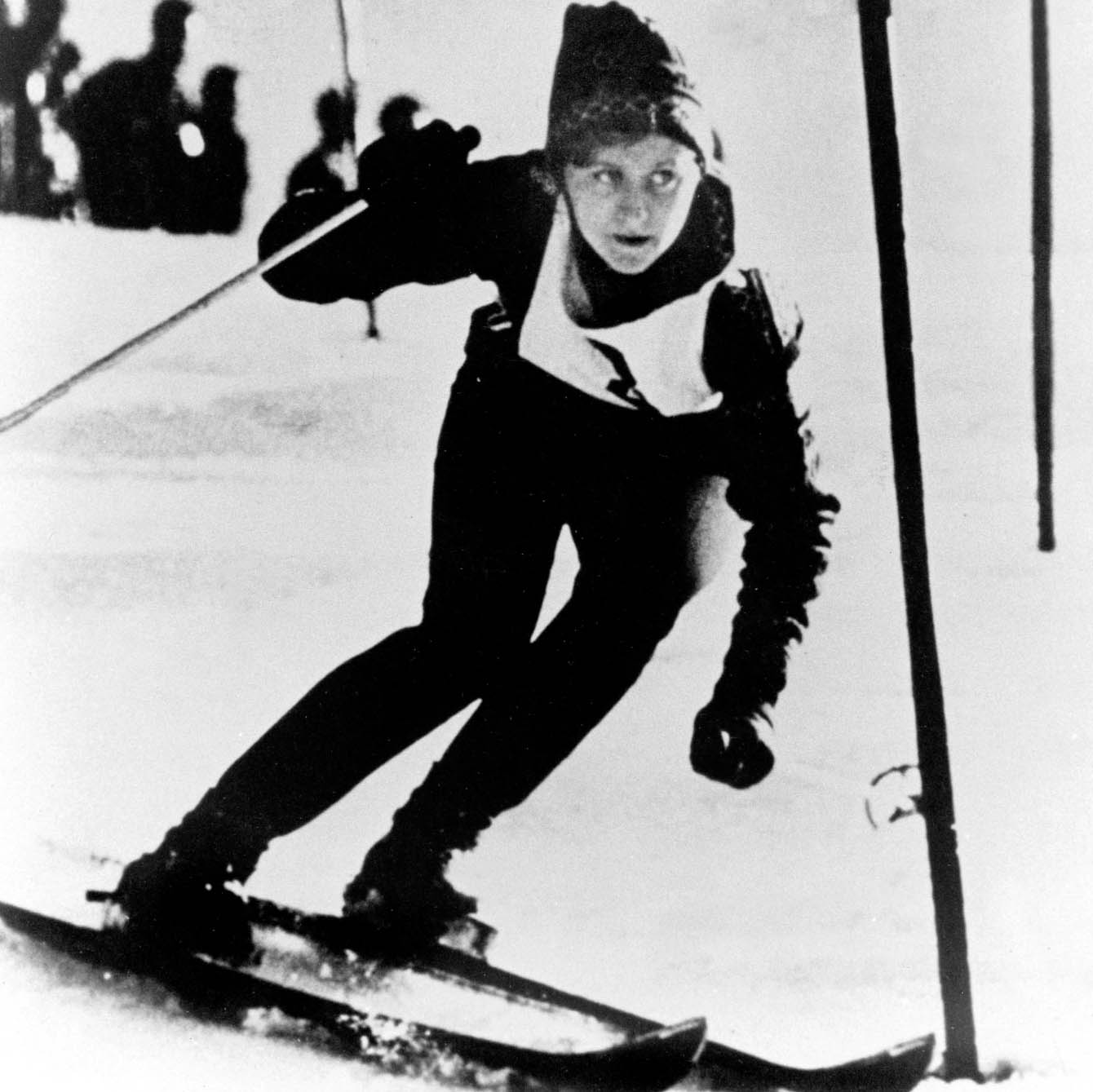 As a 15-year-old, Anne Heggtveit was the youngest ever winner of the famed Holmenkollen giant slalom in Norway in 1954. But it was at Squaw Valley 1960 that she made Canadian history, becoming the country’s first Olympic gold medallist in an alpine skiing event when she dominated the slalom, winning by 3.3 seconds, still the largest margin of victory in women’s Olympic slalom history. Heggtveit was awarded the Lou Marsh Trophy as Canada’s Athlete of the Year. She also won alpine skiing’s prestigious Arlberg-Kandahar Trophy. 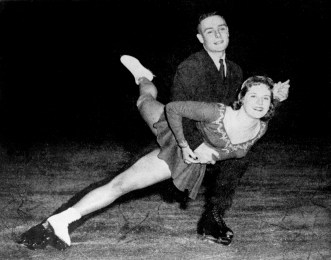 Figure skaters Barbara Wagner and Robert Paul rang in the new decade by becoming Canada’s first Olympic champions in the pairs event. Just a few weeks later they were crowned world champions for the fourth straight year, another first in Canadian figure skating. As teenagers, Wagner and Paul had finished sixth at Cortina d’Ampezzo 1956 and fifth at that year’s world championships. They then had to decide whether to return to high school or keep skating. They chose the latter and went undefeated for the next quadrennial. At Squaw Valley 1960 they were placed first by all seven judges, but it wasn’t without a hiccup as their music stopped suddenly at the start of their program. That lifted the pressure as they had a few more moments to get settled into the ice before beginning again. Wagner and Paul came along in the middle of an era of Canadian pairs dominance, with the country winning seven of eight world titles from 1954 to 1962. 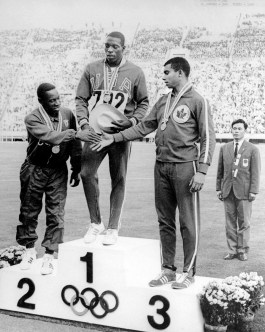 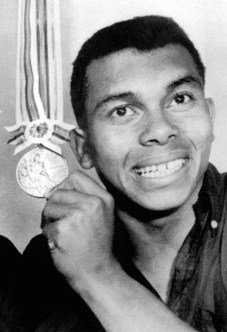 Harry Jerome with his bronze medal from the 100m at Tokyo 1964 Olympic Games. (CP Photo/COC)

It was on July 15, 1960 in Saskatoon that Harry Jerome forever cemented his place in the track and field history books, running the 100m in 10 seconds flat to tie the world record that had been set just three weeks earlier. The 19-year-old was just the second Canadian man to ever lay claim to the 100m world record, joining Percy Williams, who was the first of many men to run 10.3 seconds in the 1930s. Unfortunately, Jerome was unable to show his full racing ability at the 1960 Olympic Games in Rome. He pulled a muscle while leading his 100m semifinal and did not finish. But four years later, having recovered from torn left thigh muscles in 1962 – an injury that had nearly ended his career – Jerome won the 100m bronze medal at Tokyo 1964. Meanwhile, no one in the world would run under the 10-second barrier until June 1968.

Donald Jackson stunned the figure skating world when he landed the first ever triple Lutz in competition at the 1962 World Championships in Prague. At the time, it was the most difficult jump attempted. Twice a world silver medallist as well as the 1960 Olympic bronze medallist, Jackson had been trailing Czech Karol Divin after the compulsory figures and by all accounts needed essentially a perfect performance to get by him. After the historic jump, Jackson hit everything else in a program that was the total package of technical difficulty and artistry. He received seven perfect 6.0 scores to become Canada’s first men’s world figure skating champion. He won the Lou Marsh Trophy as Canada’s Athlete of the Year. 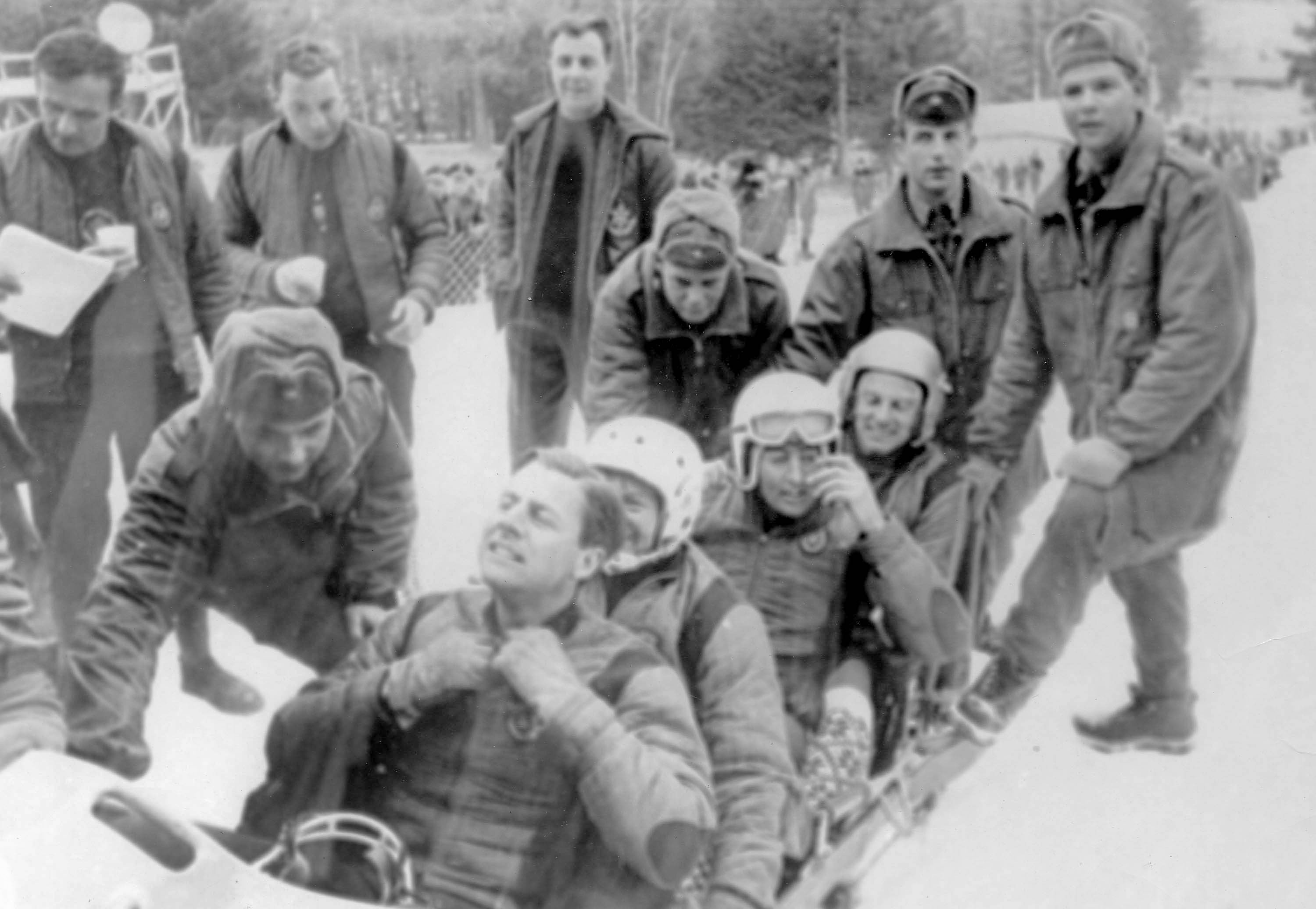 Few Olympic champions are as unpredicted as the Canadian four-man bobsleigh team at Innsbruck 1964. Pilot Vic Emery and his crew of John Emery, Peter Kirby and Doug Anakin were Canada’s first ever entry in Olympic bobsleigh competition. They didn’t have a home track on which to train, instead doing dryland runs in a gymnasium and heading south of the border to Lake Placid when they needed to slide on ice. They were without sponsorship, purchasing their own equipment. True underdogs against the heavily favoured Austrians, Italians and Germans, they exceeded all expectations when they shattered the track record and led the field by nearly half a second after the first heat. They maintained their consistency, posting the second fastest times in the second and third heats before being the top team in the fourth heat to win the gold medal by a full second in a sport usually decided by fractions. It had only been five years earlier that Emery had piloted Canada’s first ever world championship entry. His crew won the world title in 1965. 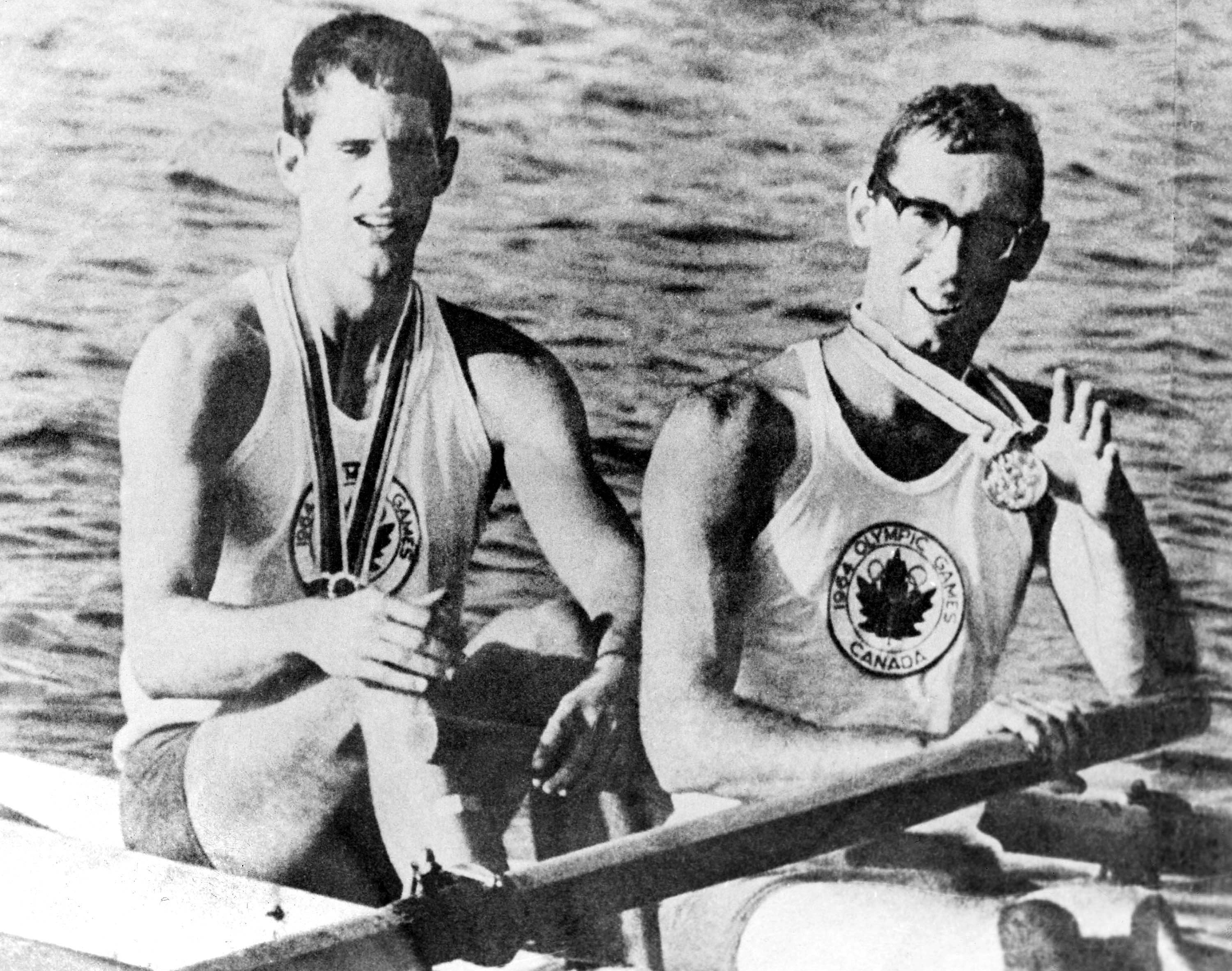 George Hungerford and Roger Jackson came together in an unexpected display of teamwork to win Canada’s only gold medal of Tokyo 1964. After a bout of mononucleosis, Hungerford had been dropped from the crew of the eight. His replacement was to have been Jackson’s partner in the pair, leaving the two leftover men to join forces. With Hungerford’s lack of experience in the pair and the duo still figuring each other out, they only hoped to make the final. But they came through with the fastest time in the heats in their first race together. In the final, they left the gold medal favourites from the Netherlands behind them, winning by three-quarters of a boat length. Hungerford and Jackson were given so little thought of success that most Canadian journalists skipped the event. They were co-winners of the Lou Marsh Award. 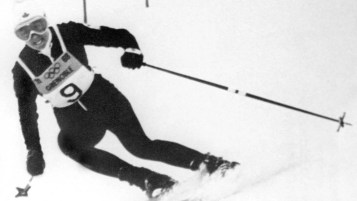 Canada’s Nancy Greene competes in alpine skiing at the Grenoble 1968 Olympic Winter Games. Greene won the silver medal in the slalom and the gold medal in the giant slalom. (CP Photo/COC)

Known on the slopes as “Tiger” because of her aggressive skiing style, Nancy Greene became eternalized as one of Canada’s greatest skiers ever in the second half of the 1960s. She claimed the first ever overall World Cup title in 1967 on the strength of seven wins in 16 races. She replicated that overall title in 1968, the same year she stood on the Olympic podium twice in Grenoble where she won giant slalom gold and slalom silver, taking the former by more than two and a half seconds. She also won the 1968 world title in the combined. Greene’s 14 career World Cup victories remains a record by any Canadian skier, making it no real surprise that she was voted Canada’s Female Athlete of the 20th Century.

1968 –  The Maple Leaf First Flies at the Olympic Games 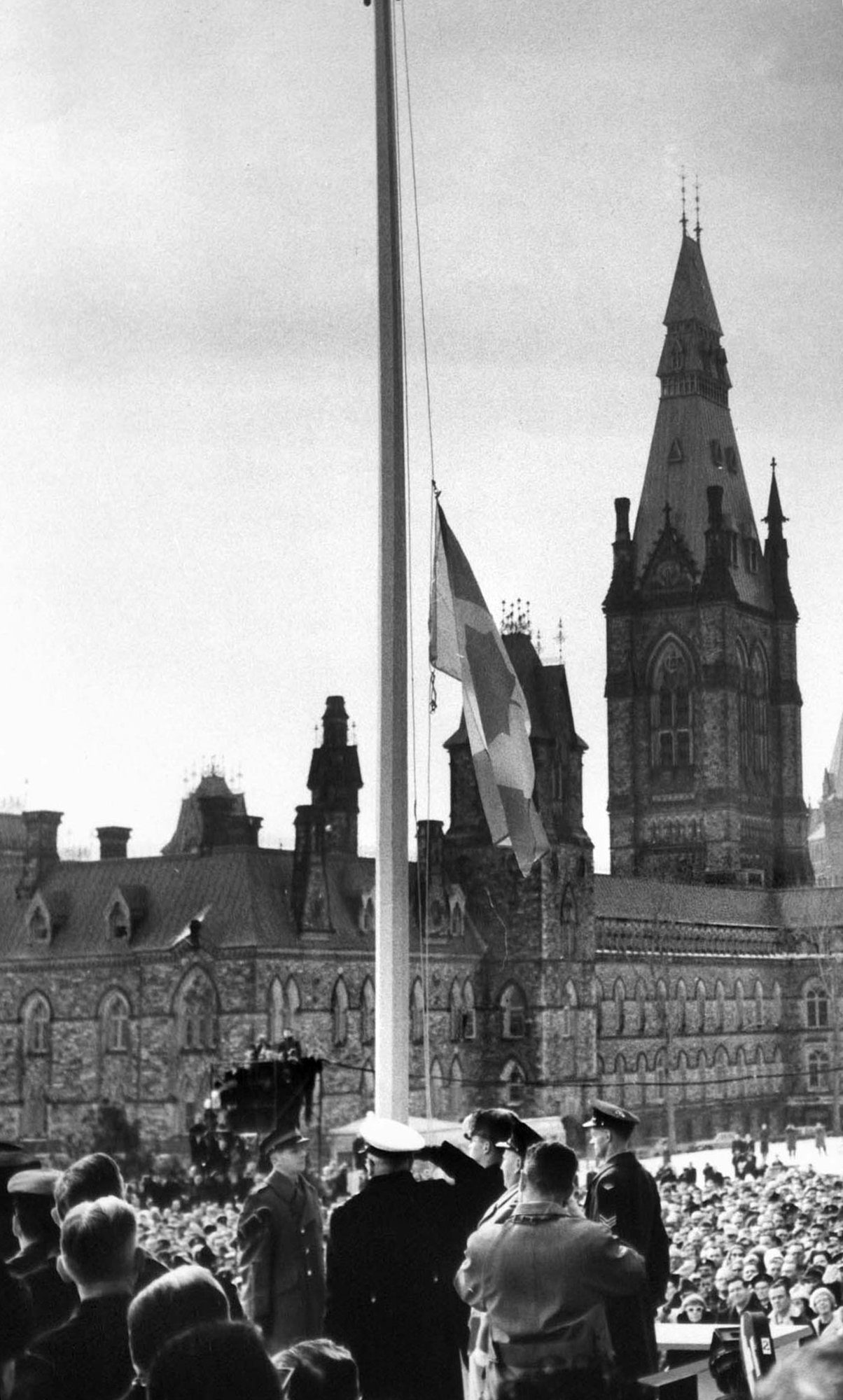 After decades of debate and sifting through more than 5900 submissions, a 15-member committee put forward to a parliamentary vote the design of the now iconic national flag of Canada. The red maple leaf on a white background flanked by two red borders was approved in December 1964 before being officially unfurled for the first time on February 15, 1965 on Parliament Hill. Three years later at Grenoble 1968, the new national flag was presented for the first time at an Olympic Games, carried proudly into the Opening Ceremony by Nancy Greene. 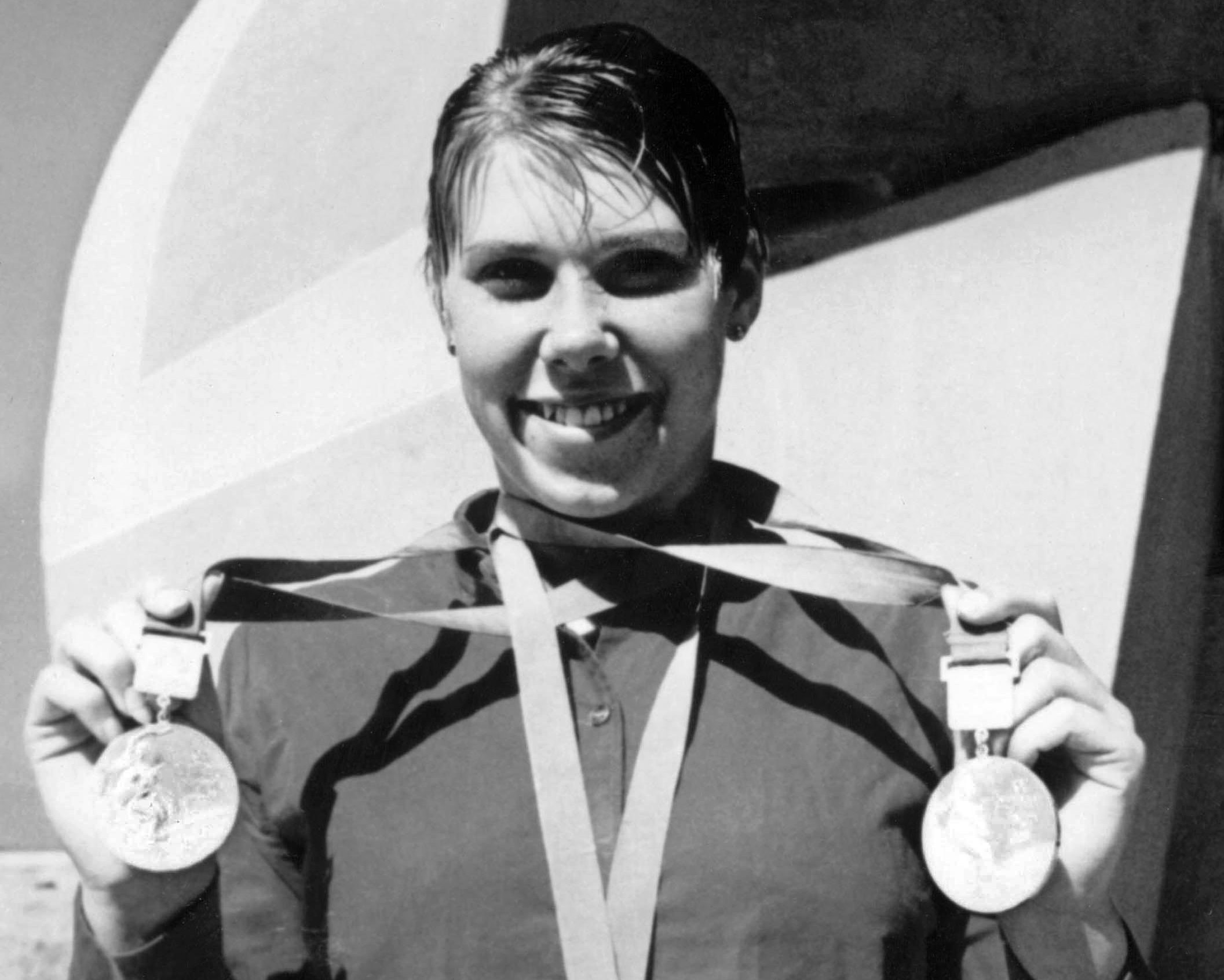 Her fierce determination and competitive drive combined with her small stature and young age led to swimmer Elaine Tanner being dubbed “Mighty Mouse”. Despite having an international career that lasted only four years, her accomplishments are monumental. An unknown in 1965, she stunned everyone by winning two gold medals at the U.S. Nationals. One year later she became the first woman to win four gold medals at the Commonwealth Games, claiming seven medals total, resulting in her becoming the youngest ever winner of the Lou Marsh Award as Canadian Athlete of the Year at age 15. At the 1967 Pan American Games, Tanner won double gold in world record times in the 100m and 200m backstroke to go with two silver medals. It all led up to incredible hype and scrutiny at Mexico City 1968 where she won silver in both backstroke events to go with a bronze in the 4x100m freestyle relay, making her the first Canadian athlete to win three medals at a single Olympic Games since Los Angeles 1932. But at the time, that success was viewed by many as a failure to win gold and Tanner endured much negative press before retiring from swimming at age 17.