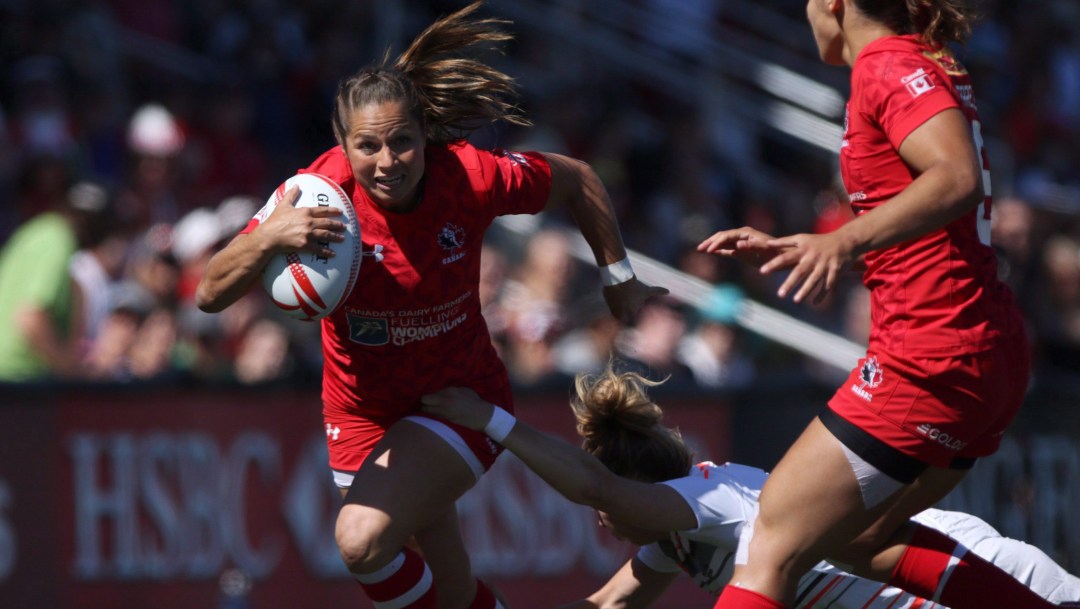 Team Canada athletes made their country proud this past weekend, bringing home a handful of medals in a number of sports.

Here’s what went down:

Captain Ghislaine Landry capped a marvelous season with three tries to reach 101 for her career, becoming just the third woman in World Series history to crack the 100-try plateau. Charity Williams scored four tries against the French, a Canadian record for tries in a women’s World Series match. Julia Greenshields also added a try in the win. Landry kicked two conversions, with Ashley Steacy booting another. That was the final match for the veteran Steacy, who retired after the game.

How much did that win mean to captain @tups4? This much!

First win for CAN vs IND in a major competition since 1998 World Cup in Holland. pic.twitter.com/IBN4YTIFVt

Field Hockey Canada’s men’s team picked up a historic win on Sunday, beating sixth-ranked India 3-2 at the 2017 World League Semi-Finals in London. Coming back from a 2-1 deficit in the second half, that victory officially qualified Canada, ranked 11th in the world, for the 2018 World Cup.

Gordon Johnston scored twice, including the game-winner on a backhand shot in the 44th minute. Goalkeeper Antoni Kindler had a career-defining match, as he held off the Indian attack in the second half to preserve the win.

Mary-Sophie Harvey took the podium twice at the 2017 Sette Colli International meet in Rome, her last competition before next month’s FINA World Championships.

The Quebec swimmer made her second trip to the Roman podium Roman the following day as she scored the second fastest time in the 400m medley (4:36.48s). Britain’s Hannah Miley, who was fourth at the Rio Olympics, won the event with a time of 4:36.28.

Canada brought home four medals from the FINA Synchro America Open this past weekend in New York. At the latest stop on the FINA World Series, Jacqueline Simoneau finished second in the solo event behind gold medallist Ona Carbonell of Spain. Simoneau collected her second silver of the day in the duet competition with a busy, precise, and entertaining free swim with Claudia Holzner. The gold medal went to Carbonell and partner Paula Ramirez.

Robert Prevost and Isabelle Blanchet-Rampling picked up a silver medal in the mixed duet.

In the women’s 120km road race at the national championships this past weekend, Olympic track cycling bronze medalist Allison Beveridge won the sprint from the final breakaway to take the title. Beveridge was joined on the podium by Olympic teammate Kirsti Lay and Alison Jackson.

Matteo Dal-Cin captured the men’s Canadian road race title on Sunday in front of his hometown crowd in Ottawa. The 26-year-old broke away from the main pack with Marc-Antoine Soucy with less than 15 kilometres remaining in the 160km race. Dal-Cin sprinted past Soucy as the two approached the finish line to seal a dramatic victory in a race that had to be stopped for about 20 minutes because of heavy rain.

#Beach: 🇨🇦 Broder and Bukovec to play for 🥇in Jamaica at the @NorcecaInfo beach tour event today. Men play for 🥉 https://t.co/gUscpsJ9IW pic.twitter.com/P7Xq0X4Sd4

The Canadians advanced to the gold medal match after a victory over compatriots Helen Rancourt and Sarah Meunier-Bedard 2-0 (21-19, 21-17) in one of the semifinals after going undefeated through Pool B and winning five matches in total.

Two-time Olympian Josh Binstock, who is officially retired, won the bronze medal with Aaron Nusbaum. The duo plan to compete in the Maccabiah Games this summer.