It’s a tightly guarded secret worthy of the best spy agencies: who will light the Olympic flame?

And what interesting or inventive way might they do it?

Here’s a look at the wondrous ways in which the flame has been lit at past Olympic Winter Games. 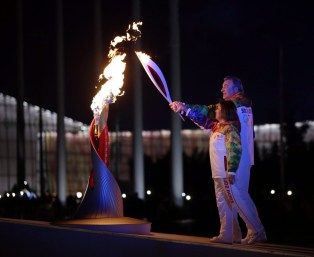 The Olympic Cauldron is lit during the opening ceremony of the 2014 Winter Olympics in Sochi, Russia, Friday, Feb. 7, 2014. (AP Photo/Julio Cortez)

Fireworks illuminate the night sky as the Olympic cauldron is lit at the opening ceremonies for the Sochi Winter Olympics Friday February 7, 2014 in Sochi, Russia. THE CANADIAN PRESS/Adrian Wyld

Sochi’s cauldron-lighting duties were shared by two of Russia’s greatest Winter Olympic stars of the late 1970s and early 80s, figure skater Irina Rodnina and goaltender Vladislav Tretiak, both winners of three gold medals. The duo completed the 65,000km relay by lighting a miniature version of the cauldron in Sochi’s Olympic Park, which relayed the flame to the top of the full-sized cauldron, setting off a spectacular pyrotechnics display.

After a 4500 km relay featuring 12,000 torchbearers, Vancouver split the honour between four all-time-great Canadian athletes: Catriona Le May Doan, Nancy Greene, Wayne Gretzky, and Steve Nash. To maintain the protocol that the flame must remain lit the entire Games and be visible to the host city, Gretzky then exited the stadium and rode in the back of a truck to the Vancouver Convention Centre, where a second, outdoor cauldron had secretly been built.

The honour in 2006 was given to Italian cross-country skiing legend Stefania Belmondo. The host nation’s most decorated female Olympian and Winter Olympian with her 10 Olympic medals, Belmondo touched the flame to the lighting base, setting off a massive fireworks display around the entire stadium that lit the 57-metre high cauldron, the tallest in Olympics history. 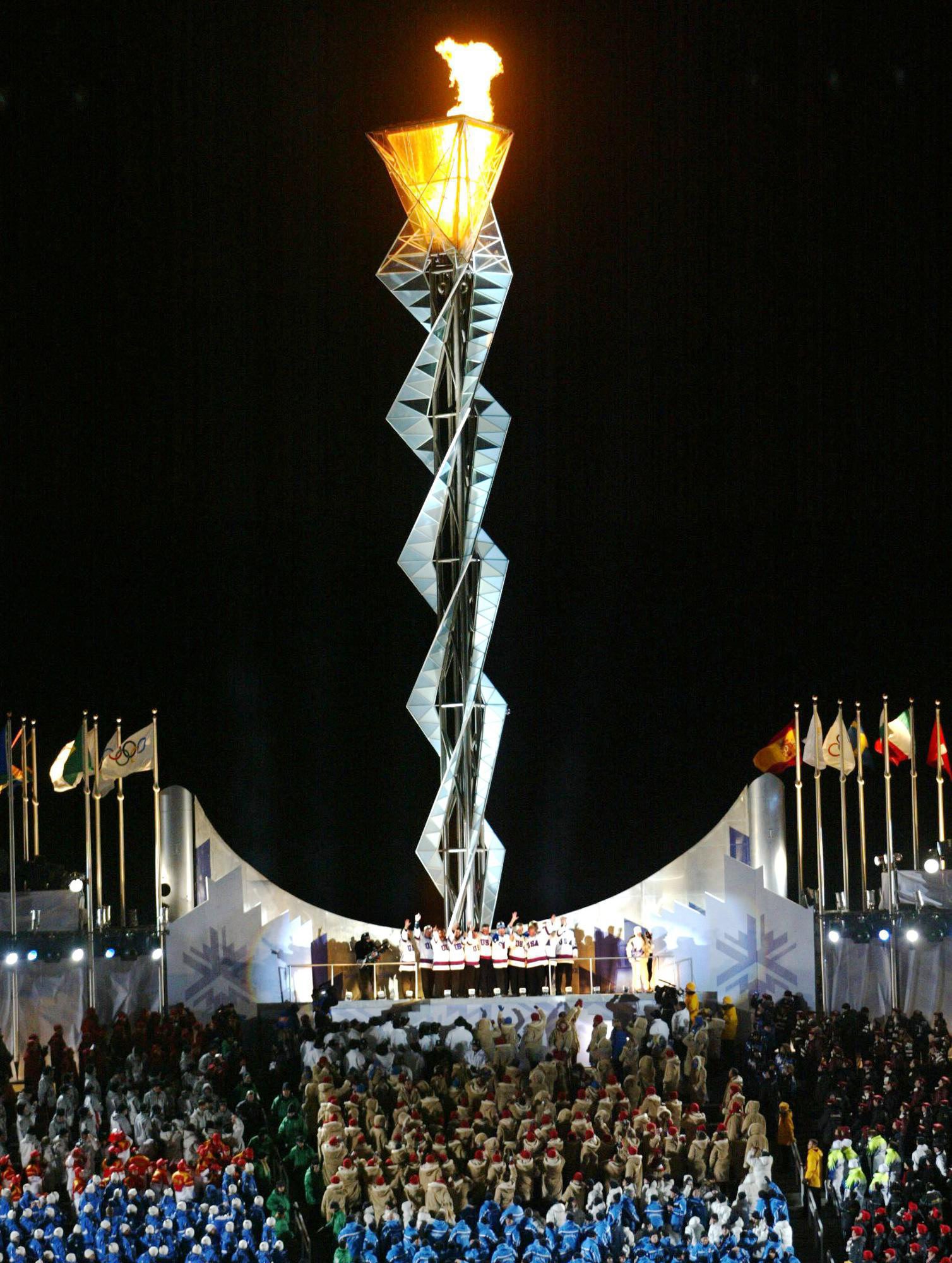 Members of the 1980 US gold medal hockey team stand at the base of the Olympic flame after lighting it at Rice-Eccles Olympic Stadium during the opening ceremonies for the XIX Olympic Winter Games in Salt Lake City, Utah on Friday Feb. 8, 2002. (CP PHOTO/Tom Hanson)

A venerable who’s who of American Olympians completed the stadium leg of the torch relay. Fourteen different gold medalists, including Dorothy Hamill, Scott Hamilton, Phil Mahre, Bill Johnson, Bonnie Blair, Dan Jansen as well as Jim and Jimmy Shea – members of the first three-generation Olympian family –  relayed the torch to the lighting platform. The cauldron was lit by members of the “Miracle on Ice” Lake Placid 1980 men’s hockey team, who ignited the flame before it rose to its final height of 35 metres. 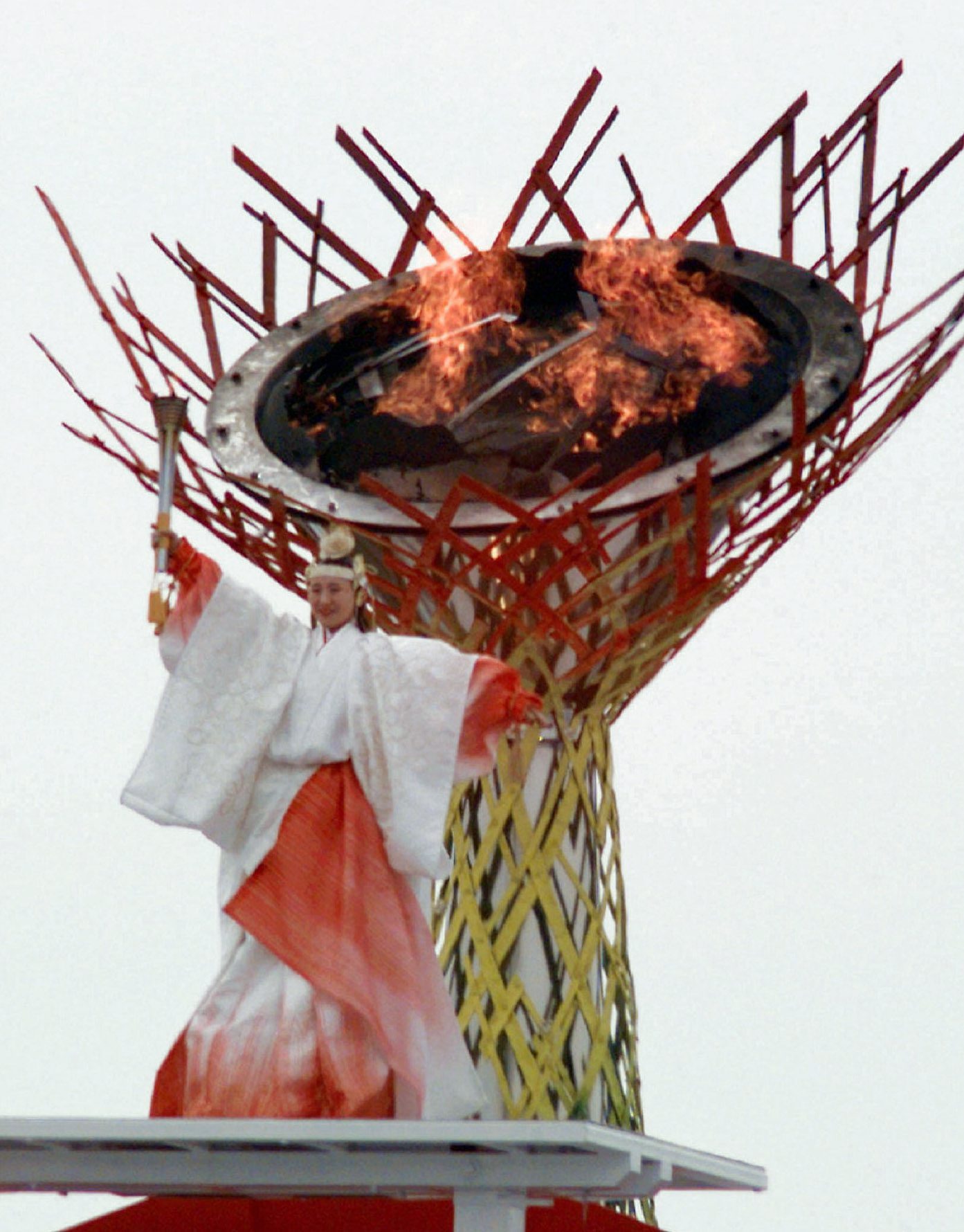 For about a month before the Games, the Nagano flame had actually been split into three to go on three separate relay routes around Japan. After it was reunited, the cauldron was lit by figure skater Midori Ito, one of Japan’s most beloved athletes who had also been the first torchbearer when the flame arrived in Japan in late December. The main cauldron was inspired by the traditional Japanese kagaribi bonfire but there were also secondary cauldrons installed and lit at five competition venues outside Nagano.

The “wow” moment came when Stein Gruben ski jumped into the stadium while holding the Olympic torch. He was actually the understudy, pushed into duty after the man who was supposed to have the starring role crashed in practice. The lighting of the cauldron was done by Haakon, Crown Prince of Norway, the most recent non-athlete to light the cauldron. But he certainly had Olympic ties. His father, King Harald V, represented Norway in sailing at the 1964, 1968 and 1972 Olympic Games while his grandfather, King Olav V, won sailing gold at Amsterdam 1928.

The Albertville flame lighting brought together the past and future of French sport. Representing the past was soccer legend Michel Platini, three-time winner of the Ballon d’Or as best player in the world and former national team captain. Representing the future was François-Cyrille Grange, a nine-year-old aspiring alpine skier, who went on to ski a single FIS World Cup event at the age of 17. The cauldron they lit was one of ten made for the Games, with the others installed and lit at the widely spread competition venues.

When the flame arrived on Canadian soil in St. John’s, Newfoundland, the first relay runners were Barbara Ann Scott, figure skating gold medallist from St. Moritz 1948, and Ferd Hayward, Newfoundland’s first Canadian Olympian from Helsinki 1952, Both were chosen to represent Canadian Olympic memories. When it came time to light the cauldron in Calgary, the organizers chose to bookend the relay with Robyn Perry, a 12-year-old aspiring figure skater, to represent the next generation of Canadian athletes. Though Robyn never became an Olympian herself, she made history as the youngest person to ever light the Olympic flame on their own.