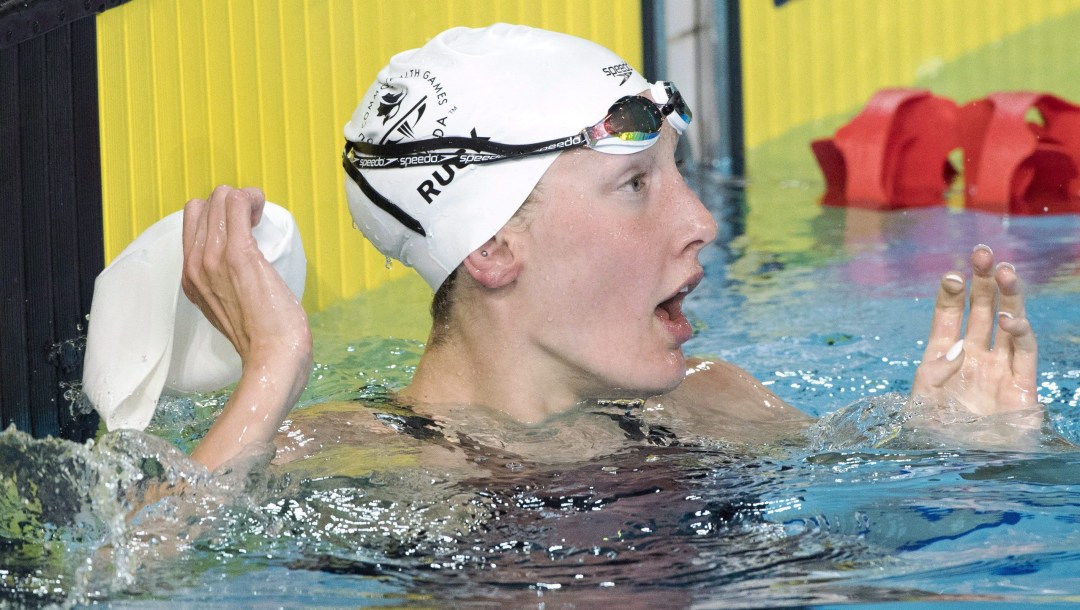 Taylor Ruck continues to lead the charge in the pool, more hardware was won as artistic gymnastics comes to end, and the athletics team is just getting going.

Here’s what you need to know:

With just one day of competition remaining in the swimming pool, Taylor Ruck has now won seven medals in Gold Coast after capturing the bronze in the women’s 100m freestyle in 53.08 seconds. Australian sisters Bronte and Cate Campbell stood on the top two steps of the podium, with Bronte setting a Games record time of 52.27 seconds.

With her seventh medal, Ruck tied the Canadian record for most medals won at a single Commonwealth Games by a woman. It was another teenage sensation swimmer, Elaine Tanner, who first set the mark in Jamaica in 1966.

“I can’t believe it, I didn’t expect to get all these medals. I knew coming in that this was shaping up to be a very good meet for me,” said Ruck. “My only strategy was to keep my head down and go as fast as I could.”

It’s been a good Gold Coast 2018 Commonwealth Games for @kierras, who has now seen @chrishemsworth and won a silver medal in the Women's 100m Breaststroke Final. #GC2018 #GoldCoast2018 #GoldCoastGoldRush pic.twitter.com/i8rYUaEjq3

Kierra Smith added a silver in the women’s 100m breaststroke, finishing in 1:07.05 to place between South Africa’s Tatjana Schoenmaker, who won gold in 1:06.41, and Australia’s Georgia Bohl, who got in for the bronze medal in 1:07.22.

“I knew the second length was my strength,” said Smith. “If I could try and swim with the girls in the first 50, I’d be able to take it home. After missing the podium in the 200 I was a little bit unsure about this race but I knew I had a medal shot.”

Tim Nedow matched his result from four years ago, winning a second straight shot put bronze at the Commonwealth Games. Nedow threw 20.91m on his sixth and final attempt, placing him behind Tomas Walsh of New Zealand, who hit 21.41m, and Chukwuebuka Enekwechi of Nigeria, who tossed a personal best 21.14m. Nedow needed that clutch throw to move onto the podium, having been sitting in fifth place.

After the first day of competition in the decathlon, Damian Warner is well-positioned to defend his title from Glasgow 2014, holding down first place with 4509 points. Just 129 points back is teammate Pierce Lepage, who was the top performer in both the high jump and 400m.

Team Canada captured two more medals on the final day of competition in artistic gymnastics, bringing their total won in the sport up to 11 medals. Cory Paterson tied for silver on the horizontal bar with England’s James Hall. Both men had identical difficulty (5.600) and execution (8.400) scores to finish half a point behind another Englishman, Nile Wilson, who earned a total of 14.533 for the gold medal.

“We came out here with the goal of getting a team medal and individual results were just an extra bonus,” said Paterson, who helped Canada win silver in the team event. “I came out and did some good routines on day one and did my job on day two here so I couldn’t be happier.”

Shallon Olsen earned her second individual medal of the Games, narrowly beating out teammate Ellie Black for the bronze on floor exercise. Olsen had the highest difficulty score (5.500) in the final, so although her execution of her routine wasn’t exactly as she hoped, she still earned a total of 13.266 points. Black ended up with 13.200 points. In an extremely tight final, Australian Alexandra Eade earned 13.333 for the gold medal while Latalia Bevan of Wales was second with 13.300.

“Today wasn’t one of my best routines, but I’m really happy with how it went overall. I’m really happy for this experience and representing Canada is really amazing,” said Olsen, who won vault gold a day earlier.