Team Canada’s Laura Crocker and Kirk Muyres are heading into the playoffs at the 2018 World Mixed Doubles Curling Championship in Östersund, Sweden.

The duo, who won the national mixed doubles title about a month ago, finished the round robin with a 6-1 record. Their only loss came in their final preliminary match against South Korea on Thursday. That secured them second place in their pool behind only the Korean duo, Heyji Jang and Kijeong Lee.

Crocker and Muyres had opened the worlds last Saturday with a 12-0 win over Ireland. That was followed by a 7-3 win over Austria and a 7-5 victory over Brazil on Sunday. They remained undefeated through defeats of Guyana (9-3 on Monday), the Czech Republic (9-3 on Tuesday), and Germany (9-4 on Wednesday) before dropping the 8-5 decision to South Korea. 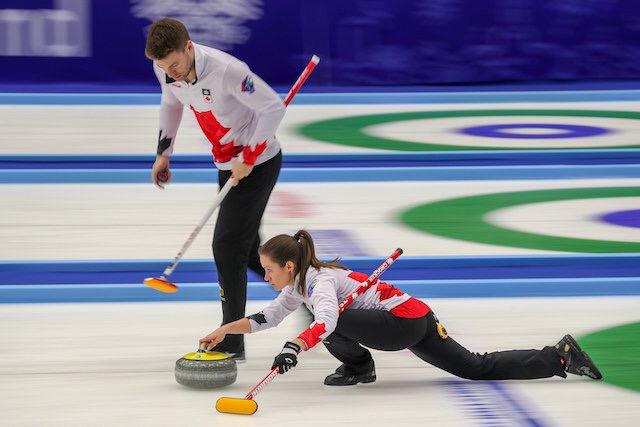 There are 40 teams, divided into five pools of eight, competing at this year’s world championships. The top three in each pool will advance to the playoffs, along with the fourth-placed team with the best pre-game draw total from the round robin. Those 16 teams will begin the playoffs on Friday with the 1/8 finals followed by the quarterfinals. The semifinals as well as the medal matches will take place on Saturday.

Crocker and Muyres are looking to continue Canada’s recent success in mixed doubles curling. Joanne Courtney and Reid Carruthers were the silver medallists at last year’s worlds while Kaitlyn Lawes and John Morris were crowned the first ever Olympic champions in the discipline at PyeongChang 2018. Canada’s only other mixed doubles world championship medal was the bronze won by Sean Grassie and Allison Nimik in 2009, which was just the second year that the worlds were contested.

The Crocker-Muyres partnership is a new one, put together for the Canadian championships when her regular partner, fiancé Geoff Walker, was unavailable because he was competing at the World Men’s Curling Championship with Team Gushue.