The second-place women’s team included Rio 2016 bronze medallists in the team pursuit, Allison Beveridge and Georgia Simmerling, along with Ariane Bonhomme and Annie Foreman-McKay. Simmerling is back on the track after making a run to compete at PyeongChang 2018 in alpine skiing. Unfortunately, a serious leg injury prevented her from reaching her fourth Olympic Games, but an incredible recovery has allowed her to return to the Canadian cycling team.

Double 🥈 for Canada's Team Pursuit squads and a new 🍁 record of 3:52.420! Totally crushing it 👊 #twcnz pic.twitter.com/8iEaUREMPK

The men’s team of Aidan Caves, Derek Gee, Adam Jamieson and Jay Lamoureux were also edged in the final by New Zealand. Canada’s time of 3:53.156 landed them on the second step of the podium behind New Zealand (3:50.159). Switzerland won bronze in 3:55.204. Vincent de Haitre, who recently transitioned to track cycling from long track speed skating, also raced for Team Canada in the first round of qualifying, when the team set a new Canadian record (3:52.420) and earned a spot in the gold medal final.

The final stop of the 2018-19 track cycling World Cup circuit takes place in next week in Hong Kong, January 25-27. 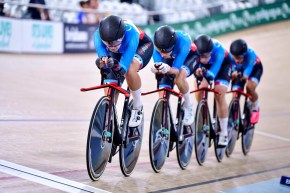 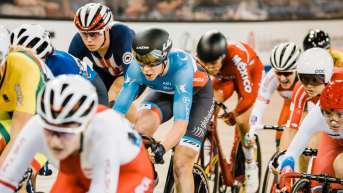 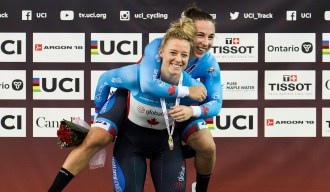