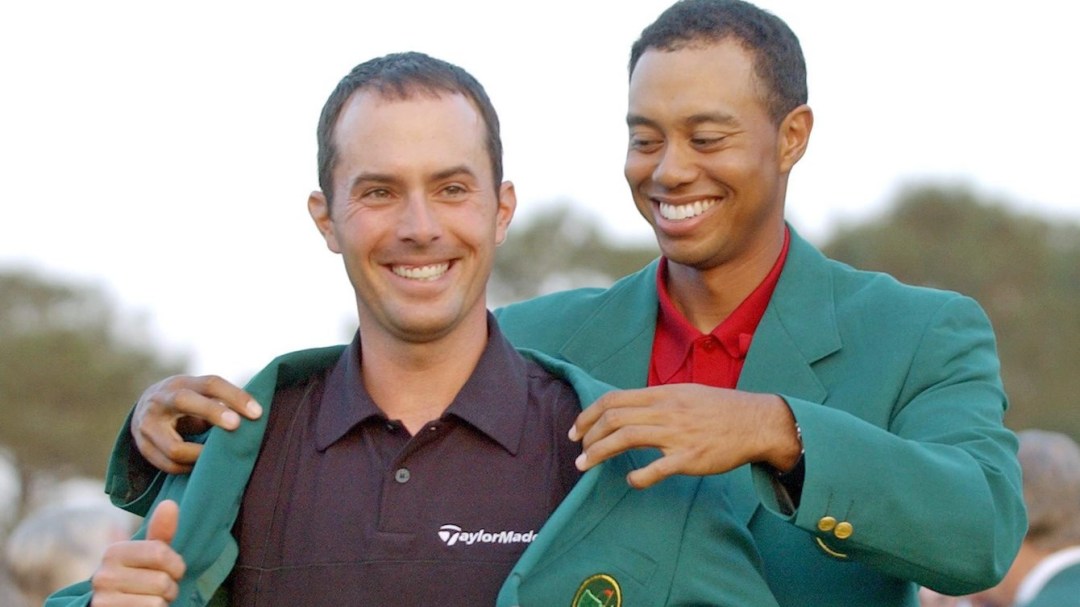 With spring comes the Masters, and with it, the famous green jacket.

You may like it, you may not, but there’s no denying that golf courses are now seen as fashion runways.

So whether you’re just a fan or figuring out what you want to be wearing on the fairways in the summer months ahead, here are some ace style choices for your consideration.

First up, some truly special jackets.

The Masters is the first men’s major of the year, held at Augusta National Golf Club in Georgia each April. On the second Sunday of the month, golfers strive to feel the weight of the jacket – its official colour is Masters Green – which was first awarded to the tournament champion in 1949. Mike Weir is the only Canadian to win the prestigious event, having done so in 2003. 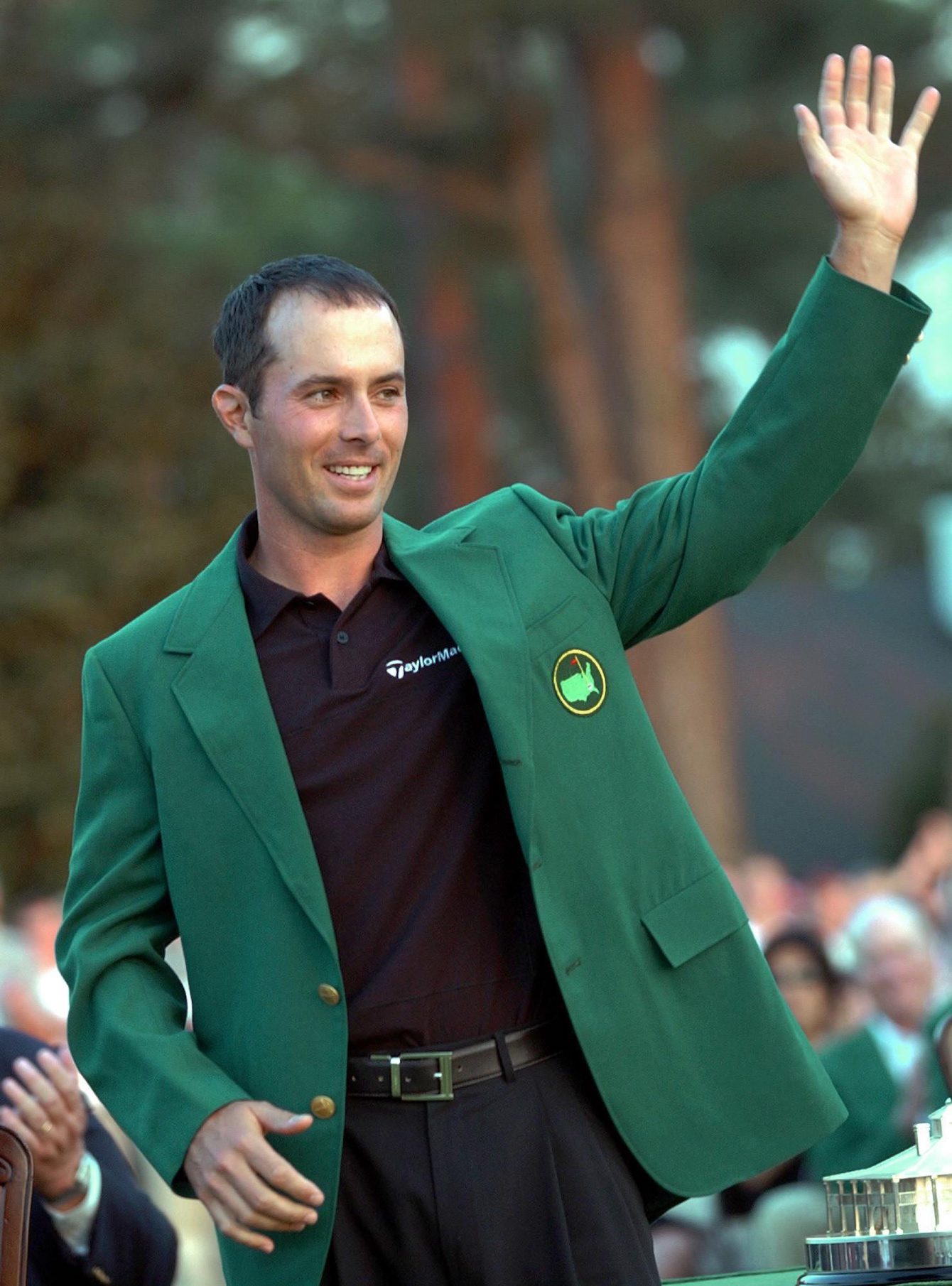 Mike Weir, from Canada, waves to the attendees after getting the Green Jacket as the 2003 Masters Champion at the Augusta National Golf Club in Augusta, Ga., Sunday, April 13, 2003. (AP Photo/Dave Martin)

The RBC Heritage jacket is definitely a sight out on the green. The red plaid shows character in tribute to the 1970 golf print of Sir William Innes, captain of the Society of Golfers in Blackheath, Scotland. Notably, Innes used to be part of the logo until RBC became the tournament’s title sponsor in 2012. 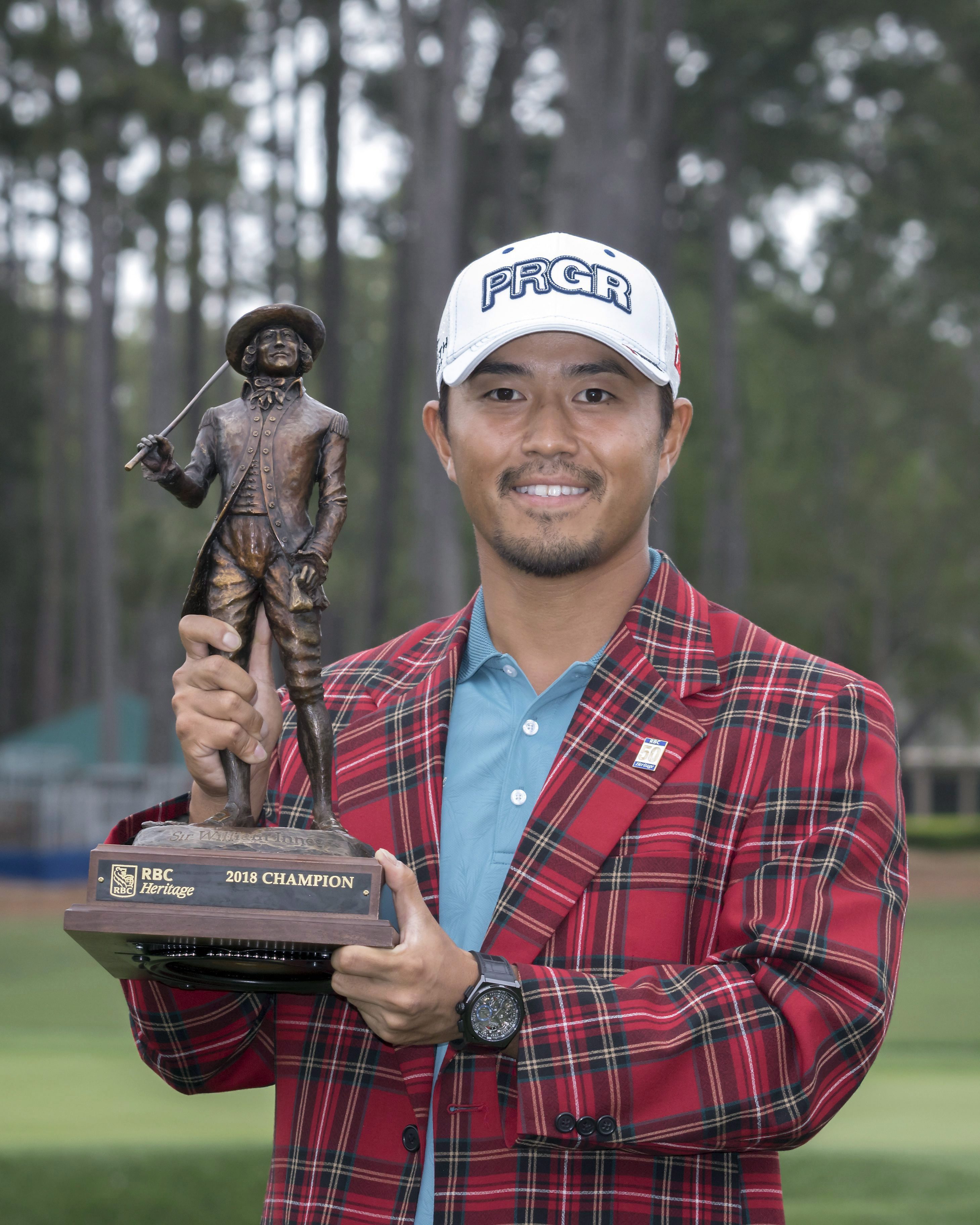 No, this is not the same jacket! Call the fashion police. The tournament at the Colonial Country Club in Fort Worth, Texas has had many names over the years, but the champion always gets to celebrate in a daring, red plaid jacket. The questions are, who truly did it first, and why does golf love red plaid so much? 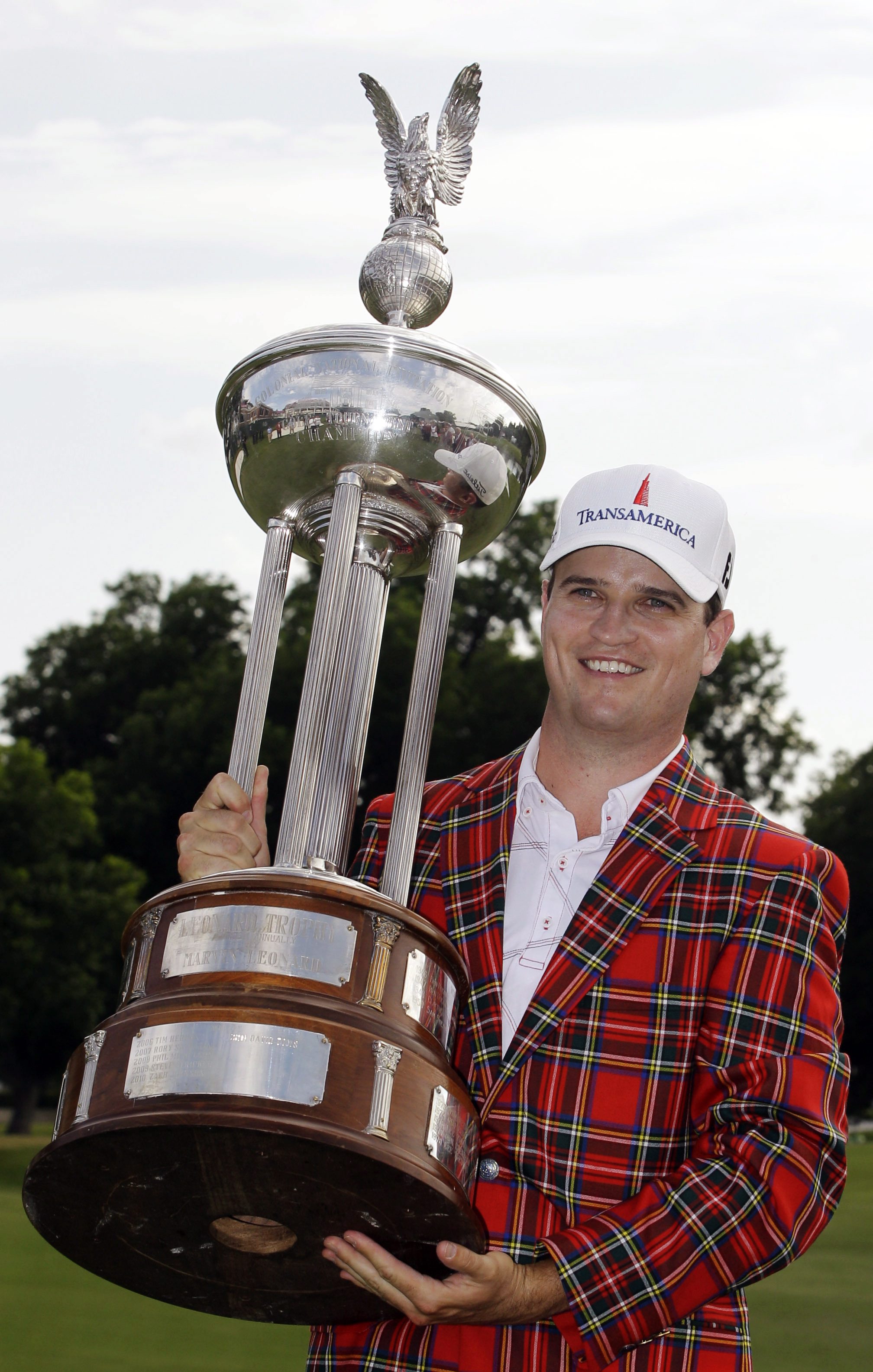 Zach Johnson poses with the trophy after winning the PGA Colonial golf tournament, Sunday, May 27, 2012, in Fort Worth, Texas. AP Photo/LM Otero

Things could only go up from here, and they did! The China Open golden jacket commemorates the culture of the host country. Ongoing since 1985, it is obvious as to why this one is a fan favourite. 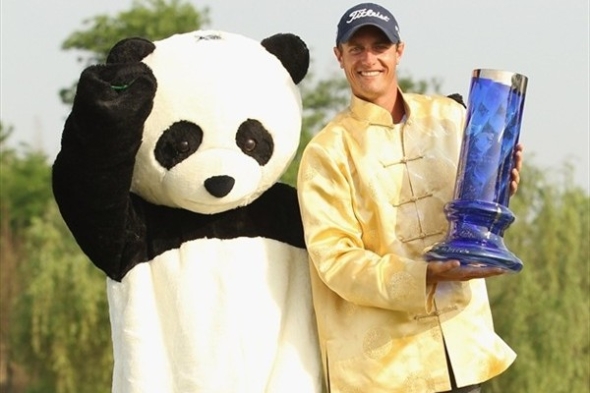 When North America thinks of Australia, they think of the warm sun and sandy beaches, and well, the Australian Masters made sure that we wouldn’t forget it. Warning: the bright yellow mustard jacket is definitely a sight requiring sunglasses. Unfortunately this tournament was last held in 2015. 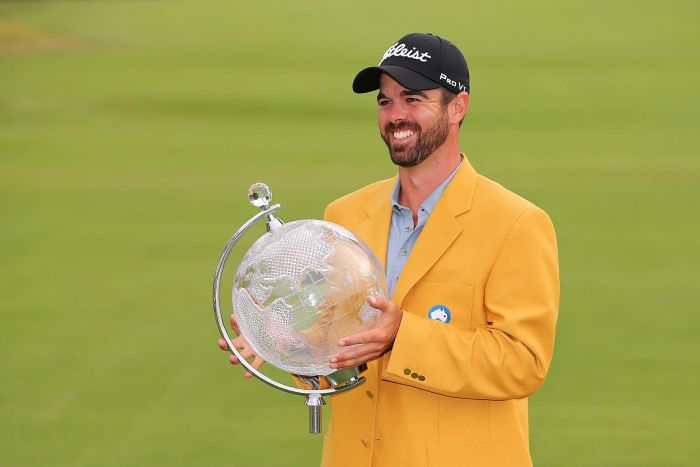 Nick Cullen is the champion of the 2014 Australian Masters. MICHAEL DODGE

Another one for the history books (this tournament hasn’t been held since 2014) is the PGA Grand Slam of Golf pink jacket. It is a bold move and one that forced each champion to embrace their confidence while in pink, because if you won this showdown of major winners, you should be able wear anything, right? 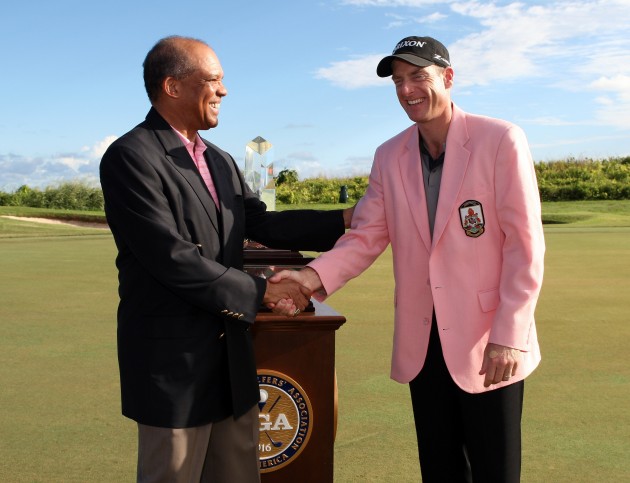 Jim Furyk wins the PGA Grand Slam of Golf in 2008.

After golf legend Arnold Palmer passed away in 2016, it was decided that instead of the navy blue blazer traditionally awarded to the champion of his namesake tournament, the winner would receive a red cardigan, an iconic piece in Palmer’s wardrobe. Thus a new tradition began.

It’s not just about who’s holding the trophy on Sunday. With four days of play essentially every weekend, these pros made sure to show their style. 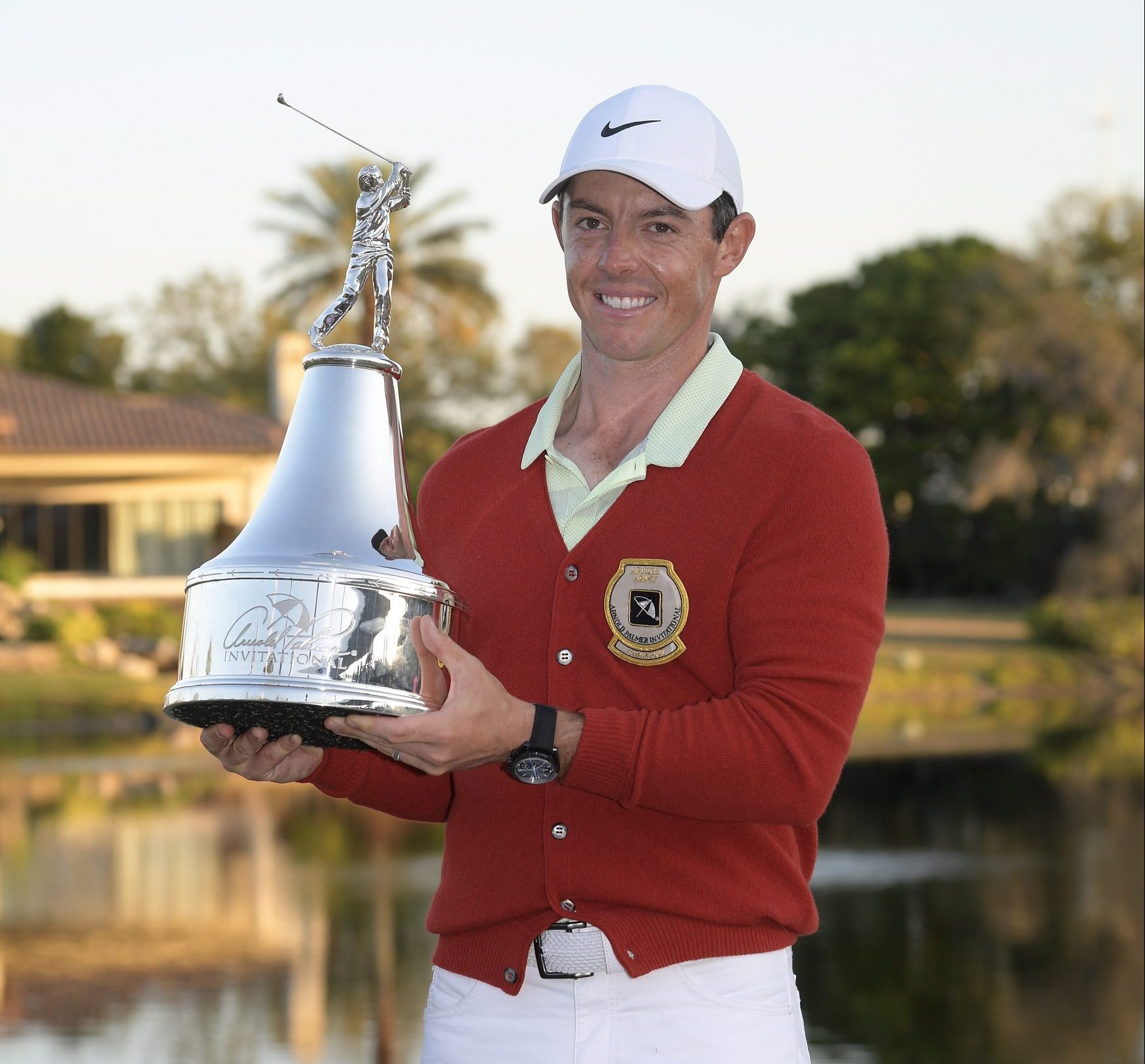 The team of Alena Sharp, Brooke Henderson, David Hearn, and Graham DeLaet showed off their classic red, blacks and whites during Rio 2016. The team looked very professional and comfortable in their solids and striped options. Although, they didn’t come out on top, they still looked fresh representing Canada in golf’s return to the Olympic Games. 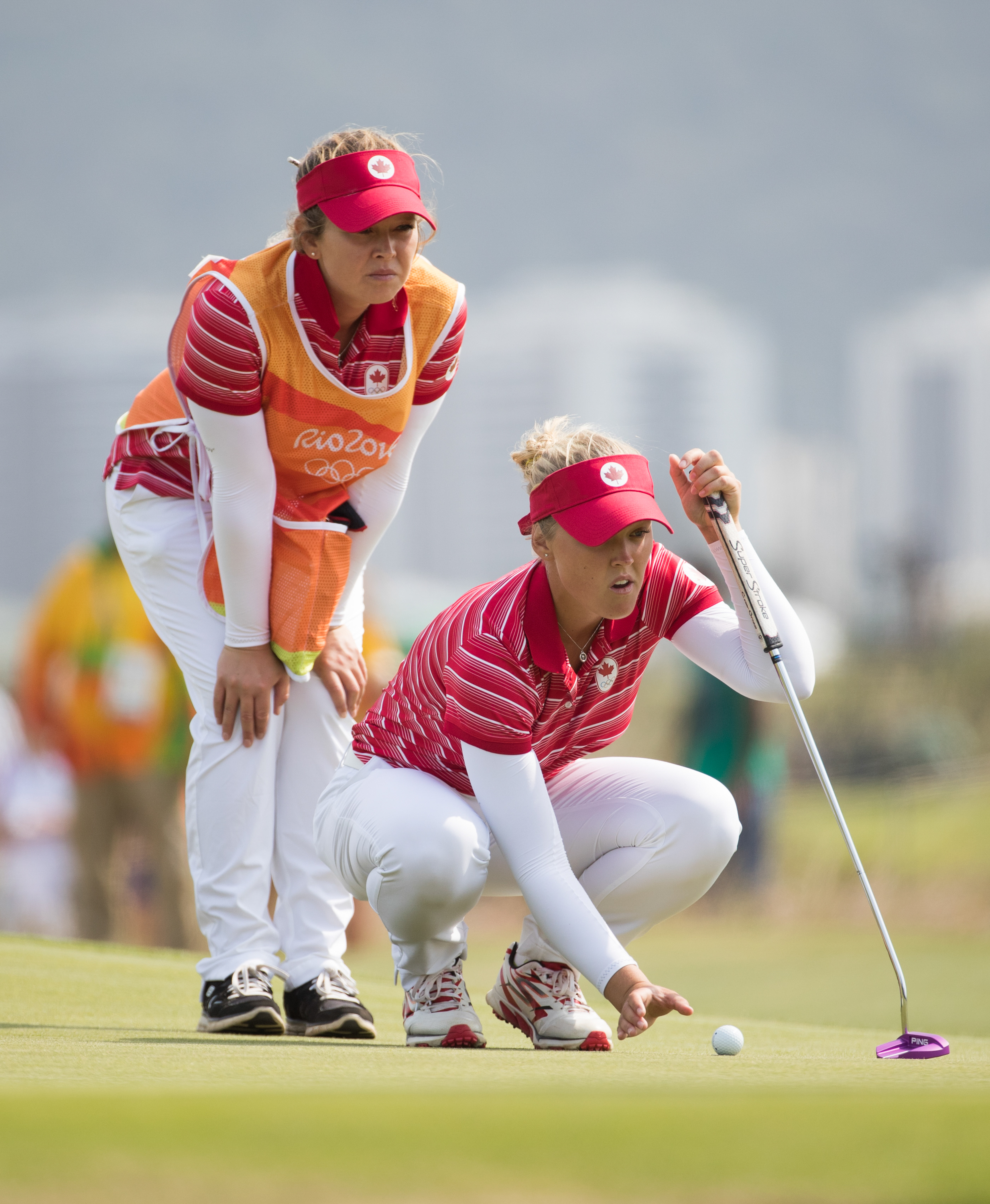 Team Canada’s Brooke Henderson lines a putt up with her caddie and sister Brittany during the final round of women’s golf at the Olympic Games in Rio de Janeiro, Brazil, Saturday August 20, 2016. COC Photo/Mark Blinch

Dubbed by some “the most stylish woman in golf”, Michelle Wie has been in the public eye since she was a 10-year-old amateur. Two decades later she’s still turning heads with her style selections, whether that be belted dresses or pink hair. What will she show next? 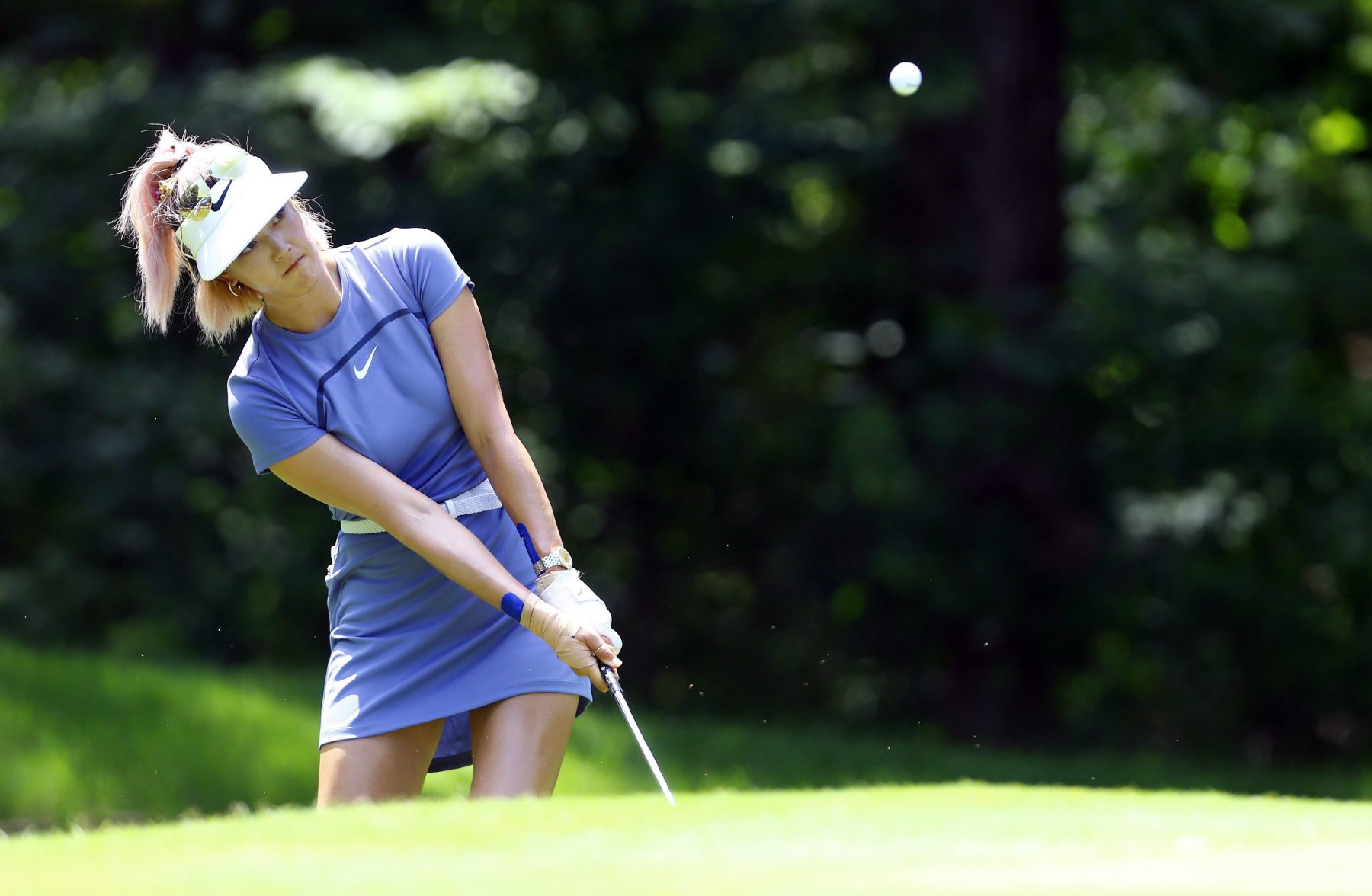 Michelle Wie hits to the first green during the third round of the U.S. Women’s Open golf tournament at Shoal Creek, Saturday, June 2, 2018, in Birmingham, Ala. (AP Photo/Butch Dill)

A true classic, American Payne Stewart won eleven PGA titles, including three majors. Stewart had a graceful swing, yet his  throwback wardrobe was most popular with the crowds. He was known for his ivy caps and flamboyant, patterned pants. He played the part and dressed in golf “uniforms,” with plus fours and knickerbockers. Sadly, Stewart died in a tragic airplane accident, but his exemplary eye for fashion will never be forgotten. 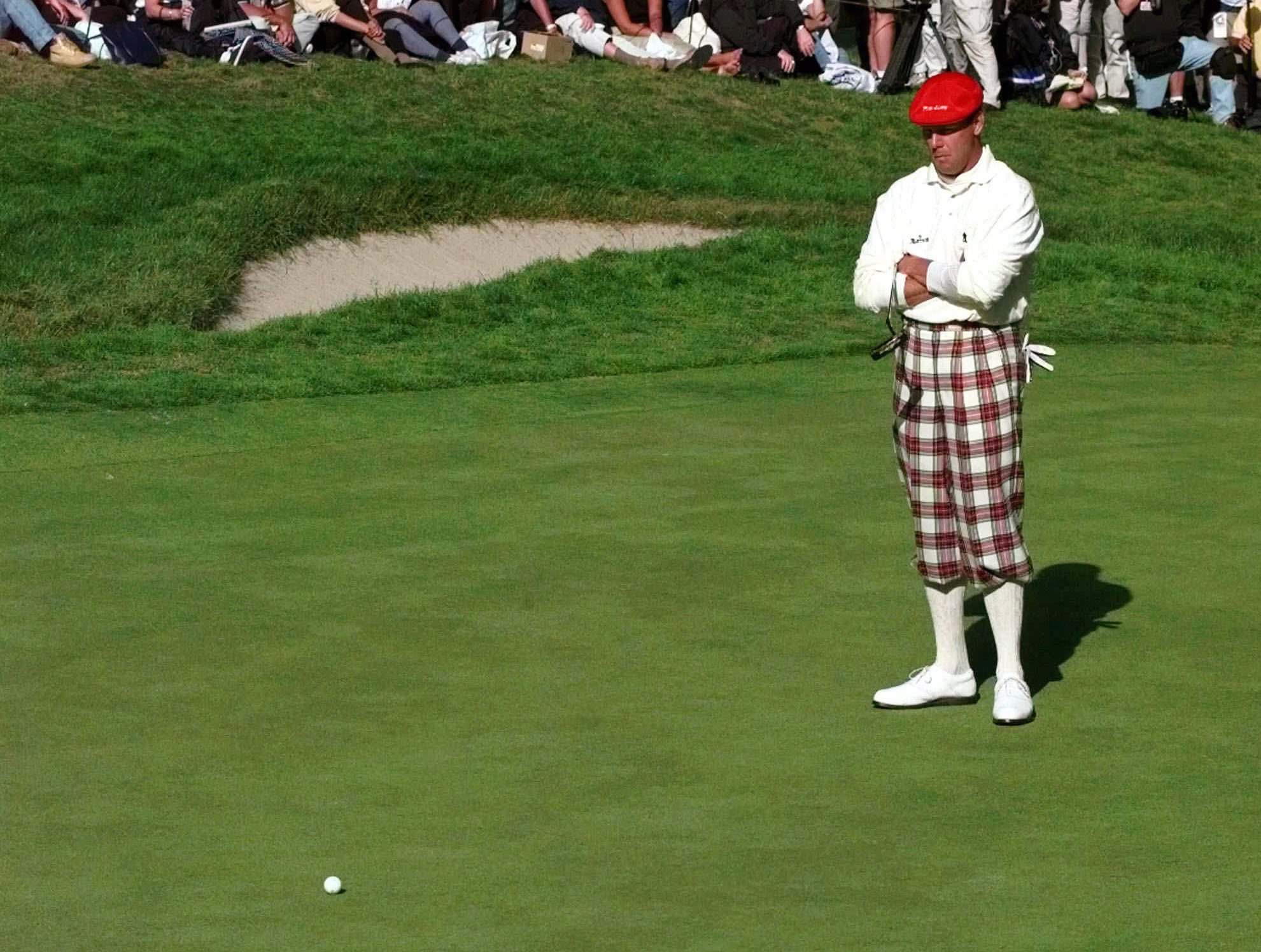 In June 19, 1998, Payne Stewart, of Orlando, Fla., waits for his ball to stop rolling during the second round of the U.S. Open golf tournament at the Lake Course of the Olympic Club in San Francisco, Calif. AP Photo/Kevork Djanzesian

Rickie Fowler is recognized for his bright colours, fresh lines and overall, trendy fashion. He helped Puma establish their brand in golf, and he made the flat-billed hat a fan favourite for younger golfers and fans. 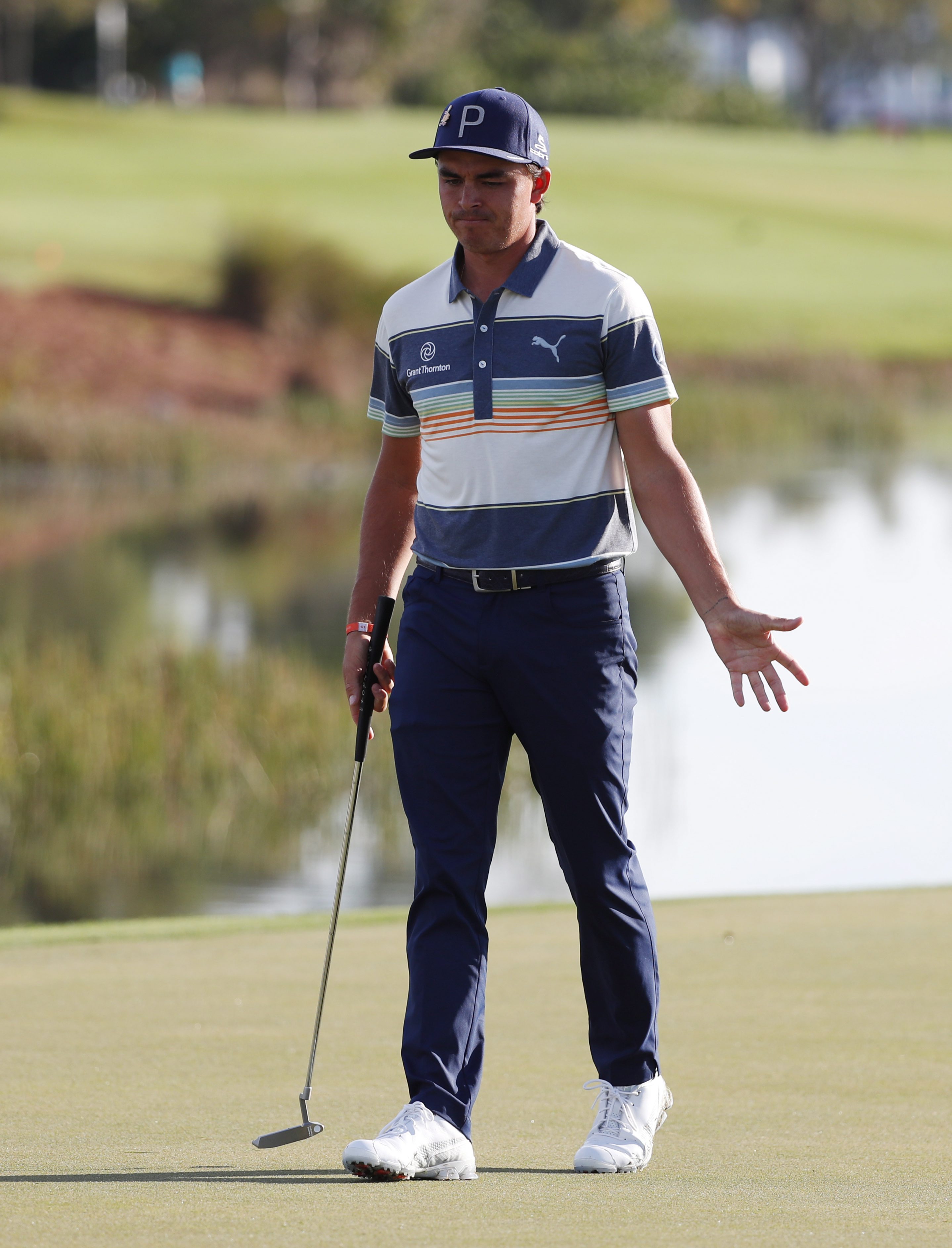 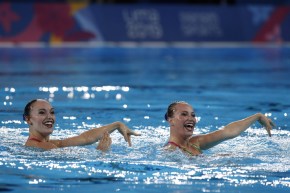 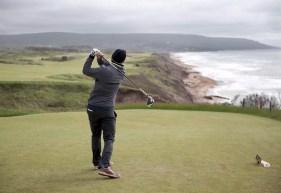 10 courses in Canada to play your next round of golf