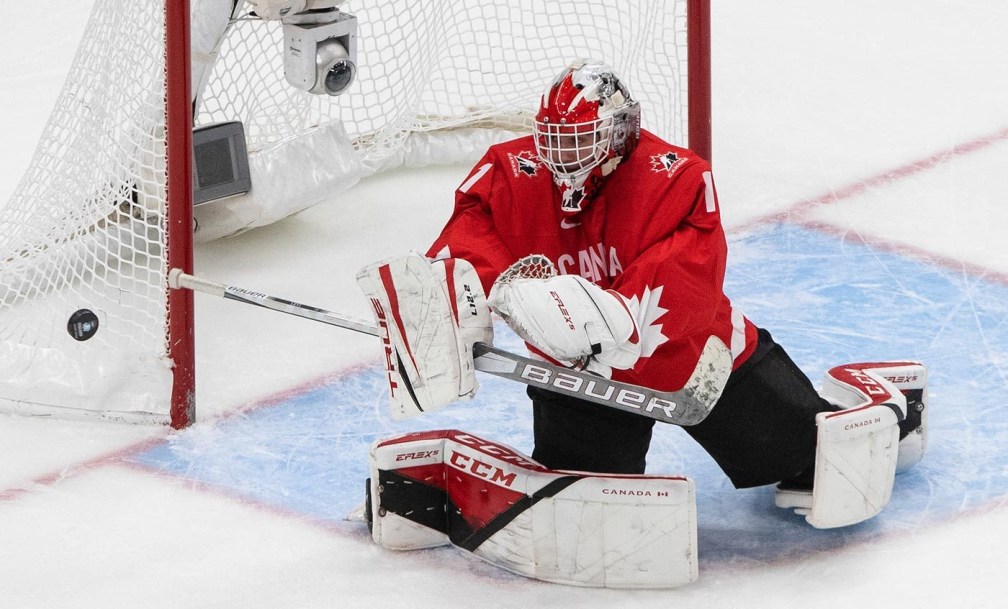 Canada repped the heritage red one last time as they returned to Rogers Place in Edmonton, Alberta for their final matchup of the 2021 World Juniors, falling to Team USA 2-0.

The puck dropped at 9:30 p.m. ET for a North American showdown for the final game of the 2021 IIHF World Juniors. Both teams came out wheels turning. Early opportunities by a strong Canadian forecheck were shutdown by the strong American defence. Every puck battle was a ferocious battle.

It was the USA who got the first advantage. The Americans brought a strong forecheck late in the first, for the first goal of the game. In a head-to-head matchup with the first lines of both teams, a redirect from American Alex Turcotte beat goalkeeper Devon Levi (13:25). America’s first line controlled play in the Canadian zone forcing Canada to give up their first even-strength goal of the World Juniors. Canada now trailed for the first time in the 2021 World Juniors tournament.

Left on their heels, Canada got the first power play with 3:22 to go in the first period. Justin Barron goes down on a trip from American Bobby Brink. Canada came close but play remained 1-0 after two shots in two minutes on a very good power play.

Canada headed to the dressing room at the first intermission trailing USA by one goal. Shots were in favour of the Americans 13-9.

Now in the second, USA was on the board again. Trevor Zegras surprised the Canadian goaltender from the back just 32 seconds into the second period. The goal gave the United States even more poise, which dominated the next few minutes. Canada has never seemed so congested since the start of the tournament.

The Canadian coach made line changes that injected a dose of energy into the Canadian players midway through the tournament. Jakob Pelleier picks up two minutes for hooking (30:03). Canada had its best scoring chances of the game, but came up short against goaltender Spencer Knight on the American post every time.

Byram gets close to a short handed goal, but hits the goal post. Canada gets closer and closer to getting on the board, but the score remained 2-0 after 40 minutes of play, and it was going to be a tough one for Team Canada. Canada is however starting to have a better flow of play despite the scoreboard.

Into the third, Canada had many opportunities deep in the American zone. Canada tried everything in the third period, failing to register for the mark. Despite some good opportunities, the United States closed the game and applied several hits to make it harder for Canada. When the puck went to the net, Knight blocked the threat.

Levi held the Canadian end. Reliable since day one, he has allowed just five goals in nearly seven games, with three shutouts. Levi’s run included a 0.75 goals-against average and .964 save percentage.

Canada’s best player of the game went to Bowen Byram. 25 days in the bubble and 51 days together resulted in a silver medal for the Canadians.

In his Olympic debut at PyeongChang 2018, forward Wojtek Wolski helped Team Canada win the bronze medal. In the leadup…