The 31-year-old crossed the finish line in 1:16.63 to claim her first World Cup medal since 2016. This also marks Gagnon’s first career podium in a speed event and fifth World Cup podium overall.

“It was a very good day. I was very surprised, but I had a good feeling all day. I felt confident with my plan,” she said following the race. “The snow conditions allowed for a good result from the back and I could attack the whole course!”

Gagnon will be back in action tomorrow with another shot at the super-G course before heading to Italy for Worlds next month.

“It’s great to be confident going into World Champs, it gives you a 10% edge over the competition. I just have to ski the skis. I’m really excited for Cortina.” 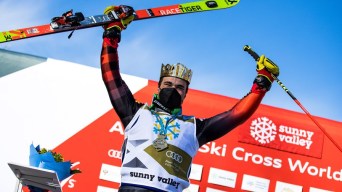 Morgan Pridy got a taste of the Olympic experience when he served as a forerunner for the downhill and super-G...

A year after his Olympic debut at Sochi 2014, Trevor Philp was a member of the Canadian squad that won…