On Friday, Quebec native Félix Auger-Aliassime advanced to the semifinals of the Murray River tournament in Melbourne, Australia.

Auger-Aliassime dominated the first set 7-6 (3) of the quarterfinals but was unable to finish the match against Czech player Jiri Vesely as he forfeited due to an injury. Auger-Aliassime also defeated Belarusian Egor Gerasimov 3-6, 6-3, 7-6 earlier that day.

In the second round of the tournament, the 20-year-old defeated his opponent, Yuichi Sugita of Japan, in a quick 65 minutes to win 6-3, 6-1.

READ: Lockdown Down Under: Canada’s tennis stars train in quarantine for Aussie Open

The third seed of the tournament, the 20-year-old will face Frenchman Corentin Moutet in the semifinals. If he defeats Moutet, he will play in his seventh career final and possibly for his first title on the ATP circuit.

The Quebecker will then play at the Australian Open which begins Monday as the 20th seed. He will face Cedrik-Marcel Stebe of Germany in the first round. 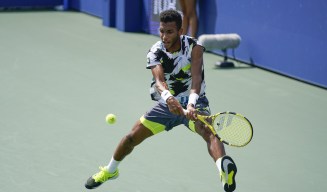