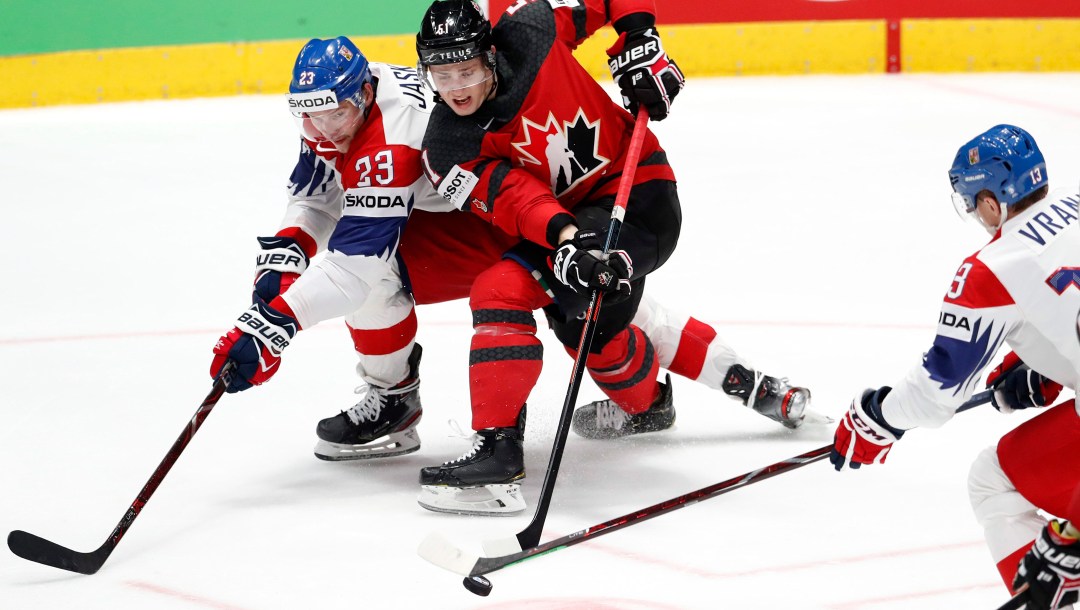 While you count down the hours until puck drop at the 2021 IIHF Ice Hockey World Championship on May 21 in Riga, Latvia, here is the info you need to know about Team Canada.

Who is on Team Canada?

The 2021 IIHF World Championship begins on May 21 and runs through June 6. The first 12 days will feature round robin play within the pools. Canada opens against host Latvia on May 21, and will also take on Italy, Finland, Germany, Kazakhstan, Norway and the United States in the preliminary round.

The quarterfinals will be held on June 3, the semifinals on June 5 and the medal games on June 6.

Canada is in Group B, and will play the following round robin schedule:

How can I watch Team Canada at the World Hockey Championship?

All games of the 2021 IIHF World Championship will be broadcast on TSN. You can check out the full schedule, including the channels for each game.

Where are they playing?

Competition at the 2021 Worlds will be held at two different locations in Riga, the capital of Latvia.

Canada will take to the ice at Arena Riga for their games in Group B. This year marks the eighth IIHF tournament held at Arena Riga. It is located in the centre of the Latvian capital and will feature games from Group B as well as two quarterfinals, the semifinals and both medal games. The Olympic Sports Centre, an indoor multi-functional sports facility, will serve as the second venue of the world championships, hosting 28 games including the Group A games and two quarterfinals.

What are the COVID-19 protocols?

Prior to travelling to Riga on May 15, Team Canada players and staff were required to self-isolate or follow their league COVID-19 protocols as of May 10 and will be tested for COVID-19 three times. Upon arrival in Latvia, all team personnel will enter a three-day quarantine at the hotel before entering a team quarantine on May 18.

Are any Olympians on the team?

While none of Team Canada’s players are Olympians, some of the staff with them have been to the Olympic Games before. General manager Roberto Luongo appeared in three straight Winter Olympics from 2006 to 2014, helping Canada win gold in his final two Games. Assistant GM Shane Doan also played for Canada at Turin 2006.

Which players can join the Triple Gold Club?

This time around, no Canadian players will be able to join the exclusive club. The Triple Gold Club is an elite group of players that have won an IIHF World title, Olympic gold and the Stanley Cup. No players on Canada’s 2021 roster have won a Stanley Cup or are an Olympic champion.

How many medals has Canada won at the IIHF World Championship?

Canada has a total of 50 medals (26 gold, 15 silver, 9 bronze), including those for which Olympic medals double as world championship medals. If you exclude Olympic medals, the total is 20 gold, 13 silver and 7 bronze.

At the 2019 IIHF World Championship, Canada won silver after falling to Finland in the final, 2-1. The 2020 tournament was cancelled due to the COVID-19 pandemic.

Canada last won the IIHF World title in 2016, where they came out with a different outcome, defeating Finland 2-0 for back-to-back gold.