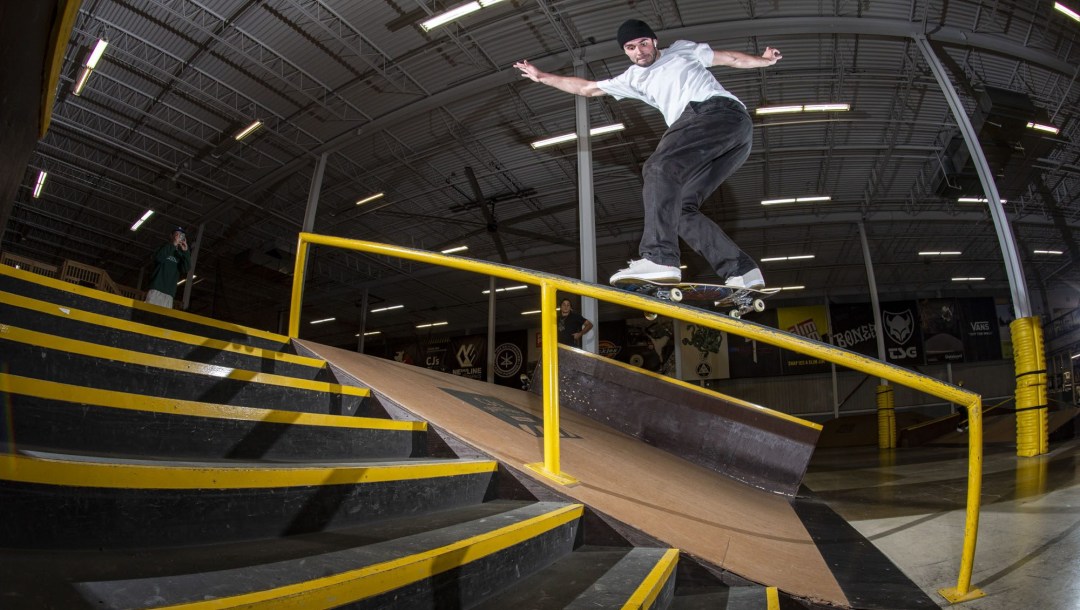 For most of his career, the concept of becoming an Olympian was not on Matt Berger’s radar.

The achievements that interested him and pretty much every other skater in the world were showing off their stuff in videos and movies, getting featured in magazines, and competing at contests such as the X Games and Street League.

But now that he will be part of a bigger Team Canada on the world’s biggest sports stage?

“I couldn’t ask for a better situation, really.”

As crazy at it might sound, Berger says he has known since he was eight that he could make a career and living from his favourite thing to do. It was a passion fostered by his parents. When his father Michael saw how much his son loved skateboarding, he built ramps and rails on the cement patio in their backyard.

“I spent thousands of hours back there. It was my own personal little park and that’s where the dreams of professional skateboarding grew from,” said Berger, who added he was the only kid in his neighbourhood who skated, which meant a lot of time spent practicing on his own.

He started getting his first small paychecks while still in the 10th grade. After a couple of breakout performances in 2014, he became the first amateur to qualify for the Street League Skateboarding Tour. He turned pro in 2015.

But despite all his success, including making multiple appearances at the X Games with its audience of millions, Berger says he didn’t always feel accepted by those unfamiliar with skate culture. That is something Olympic acceptance has already changed.

“I think the funniest thing for me is, even when over the years I’ve told people that my job is skateboarding, they still look at me like I’m some misfit,” Berger said in December 2019. “But ever since this whole Team Canada came along, it’s bridged the gap for a lot of people that have never understood the skateboard community that exists. And that it is a path for people.”

In a world that can seem ever more divided, Berger sees a place for everyone in skate culture, even if they’ve never been part of it before.

To anyone who might consider themselves an outsider and will be watching a skateboard contest for the first time during Tokyo 2020, Berger says “You’re going to gravitate towards whatever style you may like the most. And there is no right or wrong with that. And that, to me, is what makes skateboarding so cool. But in terms of if you’re going to think of the best guys, you’re going to think of the most consistent guys on the board and who look comfortable and themselves out there. And, of course, doing the hardest tricks.”

Inventing and perfecting those difficult tricks is something that arises from a simple desire to do something new. As a skater’s repertoire of tricks grows, so can the creativity, which Berger says sets skateboarding apart.

“A lot of times it’s always a debate between is it a sport or is it art? And there’s so much self-expression into that,” said Berger. “But for me, it’s really going out and skating with my friends and pushing the boundaries of my comfort zone when I’m on board and that, in turn, progresses my skateboarding if I’m consistently doing that and that can prep me for these events.”

Beyond his beloved skate culture gaining millions of new fans worldwide, Berger is hoping that Olympic inclusion will positively impact the next generation of skaters, especially across Canada. He sees such potential for city councils and community organizations to invest even more in skateboard infrastructure.

Berger says that for a lot of kids he grew up with, skateboarding kept them from “going down the wrong path”. But the Canadian weather certainly doesn’t make it easy to ride the ramps and rails year-round.

“For me as a kid growing up in Kamloops, six months of the year I couldn’t do what I love to do. And when I think about when I was that kid, how much farther would I be with this now? If the city did build indoor facilities, the same they do hockey rinks and soccer fields and things like that?” Berger pondered.

“I hope that this will help recognize how vibrant the community is and how much it actually impacts and serves and changes lives, really, because it’s given me everything.”

A Little More About Sharone Getting into the Sport: Started playing volleyball at 13, practicing with his sisters team. Then...