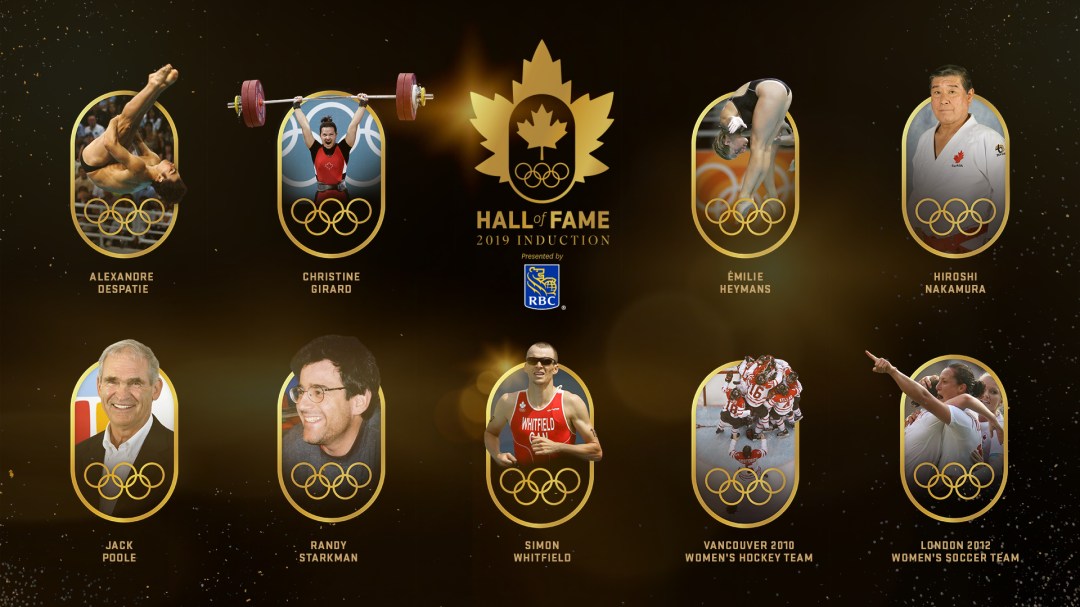 TORONTO (September 23, 2019) – The Canadian Olympic Committee (COC) revealed the 2019 inductees of the Canadian Olympic Hall of Fame (COHOF) presented by RBC on Monday. The Class of 2019 is comprised of Team Canada athletes, teams, coaches and builders who embody the Fundamental Principles and Values of Olympism with distinction.

The 2019 COHOF induction ceremony will take place on October 23, 2019 at the Glenn Gould Studio in Toronto. The individual inductees will be commemorated with murals painted in their honour that will appear in their respective local communities across Canada.

“The Class of 2019 has defined what it means to Be Olympic. These individuals remind us that the Olympic Movement is about more than just victory. It’s about making an indelible impact on our communities, our nation and the next generation,” said COC President Tricia Smith. “We are proud to honour their legacy with the distinction of membership in the Canadian Olympic Hall of Fame.”

The induction ceremony will also recognize several individuals for their work in the community. The RBC NextGen Award will be given in recognition of an individual who has made a significant contribution to developing and supporting the next generation of Olympians in Canada. The Randy Starkman Award, in honour of 2019 inductee Randy Starkman, will award Canadian national team athlete who has used their sporting excellence for the benefit of the community. Five retired Olympians will be awarded an OLY Canada Legacy grant for their work leading a project that benefits their community.

The recipients of the NextGen and Randy Starkman awards will be revealed at the induction ceremony. The OLY grant recipients will be made public on Monday, October 21, 2019.

ABOUT THE CANADIAN OLYMPIC HALL OF FAME INDUCTEES

Alexandre Despatie is the first Canadian man ever to win an Olympic medal in diving. Despatie continues to promote the values of Olympism even after his retirement by sharing the stories of today’s Canadian athletes as a media broadcaster in addition to his charity work.

Christine Girard is Canada’s first Olympic champion in the sport and the first Canadian woman to win an Olympic medal in weightlifting. Her bronze medal (Beijing 2008) and gold medal (London 2012) were awarded several years after the Games when athletes who had initially placed ahead of her were disqualified for doping. Now a passionate advocate for anti-doping in sport, Girard shares her story and is actively involved in discussions with domestic and international anti-doping advocates.

Émilie Heymans is the first Canadian summer Olympian to win medals at four consecutive Games. Following her athletic career retirement, she also shared the message that life as an athlete is not always easy, but that no matter what you do in life, it is essential to always persevere and face your fears.

Simon Whitfield made history in his Olympic debut at Sydney 2000 where he unexpectedly became the first ever Olympic champion in men’s triathlon. He was named both Team Canada’s Closing Ceremony Flag Bearer at Sydney 2000 and Team Canada’s Opening Ceremony Flag Bearer at London 2012. Since his Olympic triumph, there has been a massive growth in Triathlon participation in Canada, making it one of Canada’s fastest growing sports. He also works with charities encouraging health and physical fitness in youth.

Hiroshi Nakamura was Team Canada’s Judo Head Coach at five Olympic Games (1976, 1984, 1988, 2000, 2004) and is responsible for the establishment of Judo as a competitive sport in Canada. Sensei Nakamura helps run the Nakamura Gill Foundation which raises thousands of dollars each year to support talented young judokas that need financial assistance and provide classes for young adolescents with integration difficulties and free Judo sessions.

The women’s Vancouver 2010 hockey team won gold on home ice in at Vancouver 2010 to earn Canada its third consecutive hockey gold medal, conceding only two goals over the duration of the five game tournament. The team’s gold medal game victory (2-0) is the only time in women’s Olympic hockey history Team Canada has shut out team USA or vice-versa.

The women’s London 2012 soccer team overcame a disappointing result at the 2011 World Cup to qualify for the Olympics through regional competition to win a bronze, Canada’s first Summer Olympic Team sport medal since 1936. Their win renewed the national passion for soccer, culminating in Canada’s successful hosting of the 2015 Women’s World Cup, where a new attendance record was set for the tournament.

Jack Poole was largely responsible for bringing the Vancouver 2010 Games to Canada as volunteer Chairman and Chief Executive Officer of the Vancouver 2010 Bid Corporation and was the Chairman of the the Vancouver Organizing Committee for the 2010 Olympic and Paralympic Winter Games (VANOC). His work ensured that a generation of Canadians could pursue their Olympic dreams at home, and continue to compete and win all across the globe.

Randy Starkman was a highly respected journalist with a 24-year career covering Canadian Olympians and amateur athletes. He was known as a tireless advocate for Canadian athletes and developed a personal investment in Canada’s Olympians – described by many as a selfless human being, a man of exemplary values and immense personal character. Starkman also devoted his time to many charitable endeavors, especially those helping kids.