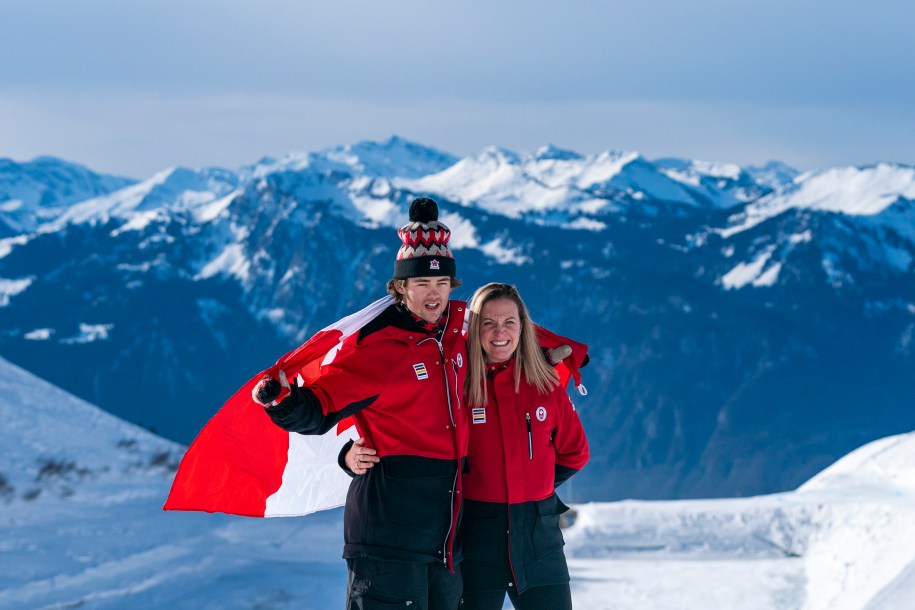 With his freeski halfpipe gold medal draped around his neck, Longino was getting ready to leave the Lausanne 2020 ceremony plaza with his family and friends when Team Canada’s Chef de Mission, Annamay Pierse, surprised them with the news that he would be carrying the Canadian flag at the Closing Ceremony.

It was quite the whirlwind 24 hours for the 17-year-old Calgary native.

“I’m feeling amazing. It’s been a really great day,” he said. “Just a lot of craziness happening, I’ve never gotten this much attention with all the pictures and press. I’m just so happy.”

78 athletes competed for Canada at the Winter Youth Olympic Games in Switzerland. Travelling to Switzerland for international competition was a first for some, having never left Canada prior to the Games.

Annamay Pierse, who led the delegation, was impressed with the way the group of athletes aged 15 to 18 embraced the experience.

“I learned that they are warriors,” she said. “I saw in so many of the athletes when in defeat or when in disappointments, they would all get back up and continue to fight. They were proud to be Canadian.”

“I saw that Canada has an incredible generation of youth who are going to be representing Canada for a very long time.”

There were many firsts during these Youth Olympics, including initiatives to support a sustainable Games. Athletes and fans used public transportation together.

There were also new disciplines introduced to the Olympic programme including mixed-nationality sports, all this to support the first-ever gender-equal Winter Youth Olympic Games.

“The mixed sports have been one of my favourites because I think that is what really reflects the Olympic spirit,” explained Pierse. “It’s not about a country getting a medal, it’s about working together. When figure skater Bruce Waddell told me winning a bronze medal in a mixed National Olympic Committee event with other countries is something that is going to connect them forever,  I thought that was just incredible to hear.”

The overall Games experience was not just catered to the athletes but rather to everyone in the community.

It was reported that more than 640,000 spectators, including 80,000 school children attended Lausanne 2020. Several indoor competitions, including figure skating and short track at the Lausanne Skating Arena, were sold out days in advance.

Pierse credited the atmosphere created by the fans for making the Games truly special.

“One of my other favourite things about these Games was also how many kids have been around,” said Pierse. “I think almost every school in Switzerland got involved in some way or another. I had kids on the train with me for an hour just to get to an event and they were so excited. Then when I talked to some of our athletes, they said the fact that there were so many kids cheering made them feel like rockstars!”

“These Games have been absolutely amazing and I hope that these children were all inspired to participate in sport and represent their country one day.”

The Youth Olympic Games are an international Olympic sporting event that combines sports performance, culture and education in an authentic celebration of sport with a festive atmosphere. The aim is to encourage young people to adopt and represent the positive values of sport – respect for others, for themselves and for our environment; friendship between people and cultures; and, excellence in self-giving – and to become sports ambassadors throughout the world.