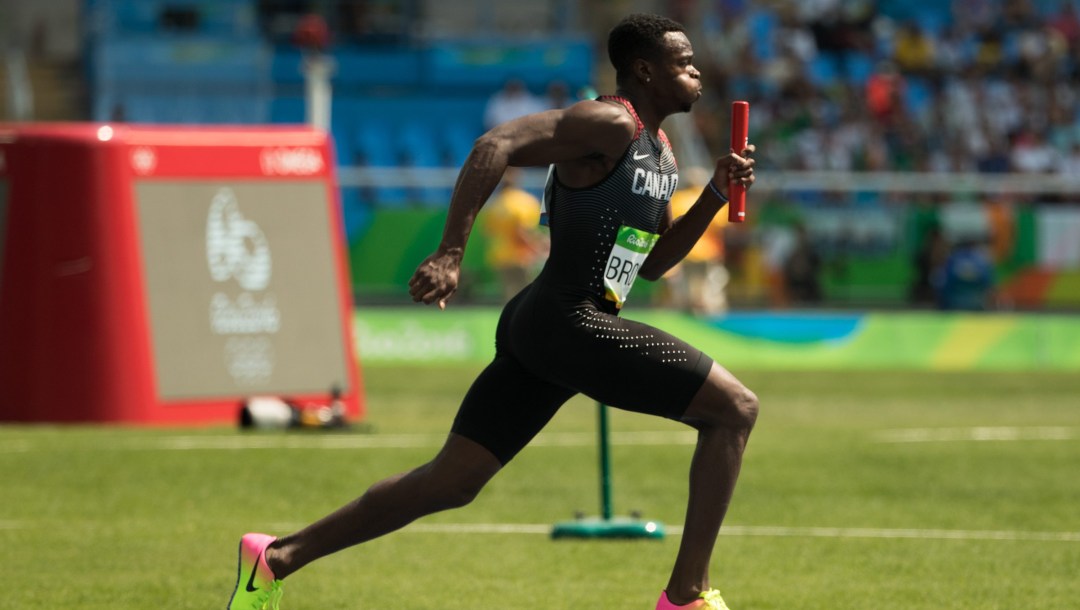 Aaron Brown competed at his second Olympic Games at Rio 2016, running the second leg of the 4x100m relay that won bronze in national record time. He also competed individually in the 100m and 200m. Four years earlier at London 2012 he came within one spot of qualifying for the 200m final, finishing ninth by 0.05 seconds. One of the country’s top sprinters, Brown is a former Canadian record holder in the 200m. On June 11, 2016, he became just the fourth Canadian man to ever break the 10-second barrier in the 100m, running 9.96 at a meet in Florida. Brown made his senior IAAF World Championship debut in 2013, where he was part of the bronze medal 4x100m relay team. He ran the leadoff leg when Canada successfully defended that bronze in 2015. Earlier in 2015 he was the anchor of the 4x100m relay team that appeared to have won gold at the Pan Am Games in Toronto before a lane violation led to disqualification. Brown had previously won 200m bronze at the 2010 IAAF World Junior Championships and 100m silver at the 2009 IAAF World Youth Championships. At the 2011 Pan American Junior Championships, he won 100m bronze and 4x100m relay silver. Brown raced collegiately for the USC Trojans. As a senior, he won 100m bronze and 200m silver at the 2014 NCAA Championships.

A Little More About Aaron

Getting into the Sport: Started running track at age 16 thanks to high school coach Bill Stephens… Has wanted to compete for Team Canada since watching the Beijing 2008 100m final… Outside Interests: Graduated from the University of Southern California in 2014; major in political science and minor in business… Enjoys playing basketball, travelling, music, art, collecting shoes, eating unhealthy in the off-season… Odds and Ends: Favourite motto: “To be #1, you must train like you’re #2”… Role model is LeBron James because of the way he lived up to his hype and overcame the critics… Collects mascot dolls from the meets at which he competes… Nicknames: Kingsley, AB, Smoov…