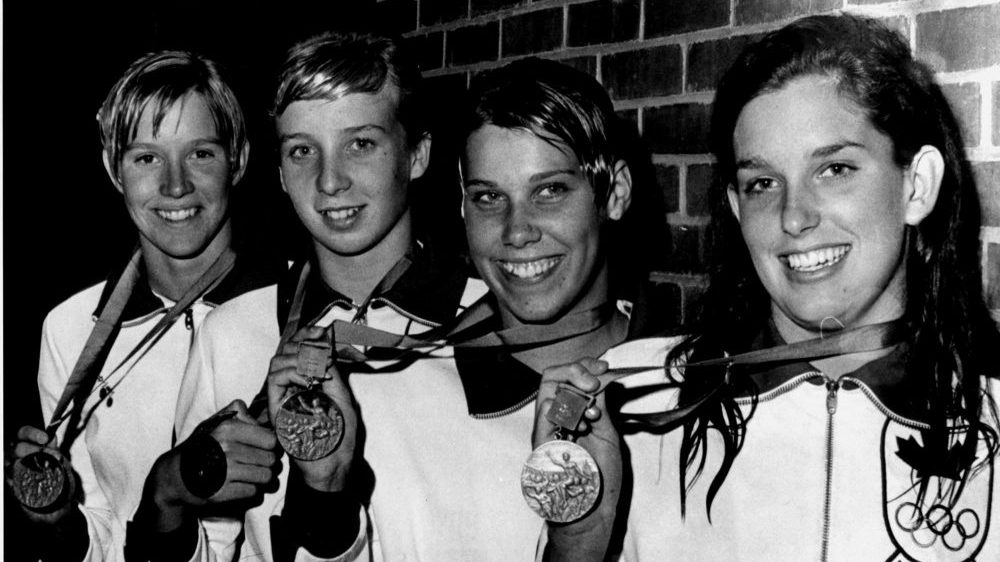 Just a few weeks after her 16th birthday, Canada’s teenage swimming sensation Angela Coughlan was competing at Mexico City 1968, where she swam in four individual events as well as the freestyle relay. Despite suffering from a stomach ailment in Mexico City, Coughlan qualified for two individual finals, finishing sixth in the 800m freestyle and seventh in the 400m freestyle. Together with Canadian teammates Marilyn Corson, Elaine Tanner and Marion Lay, Coughlan won a bronze medal as a member of women’s 4x100m freestyle relay team. She arrived home to a hero’s parade through her hometown of Burlington, Ontario.

Coughlan represented Canada from 1967-72 making her debut on the national team at the age of 14. She had a successful international career winning medals at all the major Games available. After her impressive performance at Mexico City 1968, Coughlan shot to fame. At the 1970 Commonwealth Games, she won one gold (100m freestyle) and three silver medals (200m freestyle, 4x100m freestyle relay, 4x100m medley relay). At the 1967 and 1971 Pan American Games, Coughlan brought home a total of nine medals (one gold, four silver, four bronze). A 23-time Canadian champion, Coughlan was Canada’s best female freestyle specialist at her peak, with a domestic, undefeated freestyle streak, setting 13 national long course records and one world record.

Born in London, Ontario, Coughlan moved to Toronto and then to Burlington at age seven, where she attended Elizabeth Gardens Public School and M.M. Robinson High School. She was only 18 when the pool that would bear her name, Angela Coughlan Indoor Pool, was opened next door to the high school she was attending.

Coughlan retired from competitive swimming in 1972 at the age of 19. In 1973, she married fellow swimmer 1968 Olympian Tom Arusoo and together they had three daughters. Divorced from Arusoo a decade later, Coughlan became a sports massage therapist and remarried. Part of her post-competitive career was spent as a swim coach and mentor to younger swimmers.

In 2005, Coughlan was diagnosed with multiple myeloma, a type of bone cancer. She successfully underwent stem cell replacement therapy but suffered a relapse, dying on June 14, 2009 at age 56. It was only days before she was to be recognized at the annual Celebration of Significant People Concert in Hamilton, Ontario.