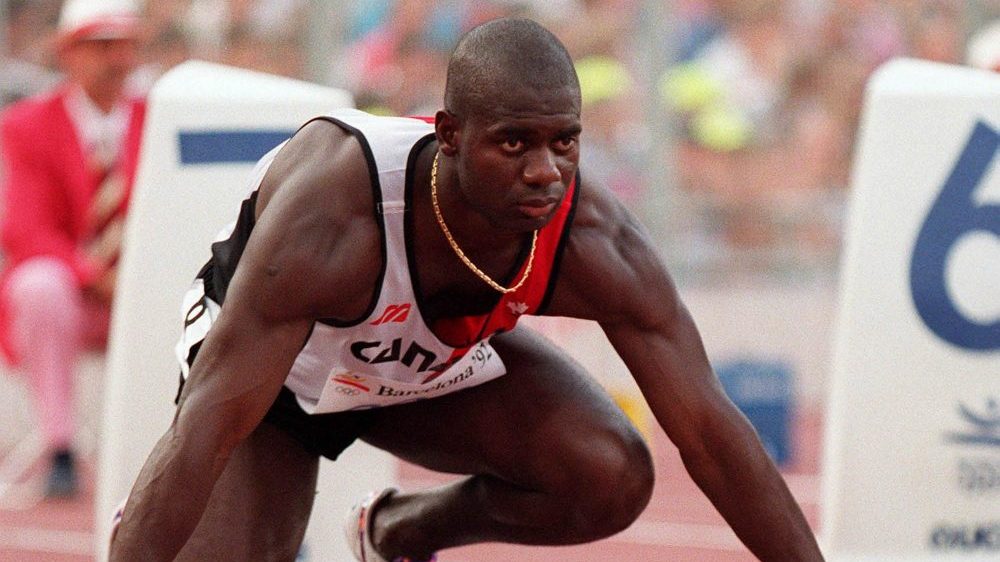 Making his Olympic debut at Los Angeles 1984, and after false starting in the 100m final, Canada’s Ben Johnson won the bronze medal in 10.22 seconds, preventing an American sweep of the podium. In the 4x100m relay final, he won his second bronze medal of the Games along with Tony Sharpe, Desai Williams and Sterling Hinds. It was at Seoul 1988, where Johnson’s decade long rivalry with American Carl Lewis, which had been building for years, would come to a head. It was September 24, 1988 when Johnson became the first sprinter from Canada since Percy Williams at Amsterdam 1928 to win the 100m Olympic final lowering his own world record to 9.79 seconds. His status as Olympic champion would last 62 hours, and when he tested positive for the banned substance stanozolol (anabolic steroid), his gold medal and records were withdrawn and he was disqualified from the Games. After serving this drug suspension, Johnson returned to the Olympic theatre under immense global attention to run at Barcelona 1992 where he finished eighth in the 100m semi-final after stumbling out of the blocks, and was the lead-off runner for the 4x100m relay team that was disqualified in the semi-final.

Johnson, nicknamed “Big Ben”, first saw international success winning two silver medals at the 1982 Commonwealth Games. He would become a five-time Commonwealth Games medalist winning with all-time medal count of two gold, two silver and one bronze at Brisbane 1982 (100m and 4x100m relay silvers) and Edinburgh 1986 (100m and 4x100m relay gold, 200m bronze). Winning the 100m over Lewis in a world record of 9.83 seconds at the 1987 World Championships in Rome brought Johnson instant world-wide fame and lucrative marketing contracts but his subsequent positive drug test in 1988 wiped out both his title and his records. A two-time World Indoor champion over 60m in 1985 and 1987, Johnson was ultimately disqualified from the 1987 race after admitting in 1989 that he used performance enhancing drugs. His only appearance at the Pan American Games was in 1983 where he finished fifth in the 100m.

Just months prior to the 1993 World Indoor Championships in his hometown of Toronto, Johnson won a 50m race in Grenoble, France, running 5.65 seconds (0.04 seconds off of the world record), tested positive for excessive testosterone, and was banned for life by the International Amateur Athletics Federation (IAAF).

Jamaican-born Johnson moved the Canada with his mother and three of his five siblings at the age of 14, leaving his father behind to continue working at the phone company. At 15, he was inspired by watching Montréal 1976 and was introduced by his brother to his one and only track coach, Charlie Francis, a three-time national 100m champion (1970, 1971, 1973) and Munich 1972 Olympian. Within four years, Johnson competed at the 1980 Pan American Junior Championships in Sudbury, meeting who would be his career rival, American Carl Lewis, for the first time. He finished sixth in the 100m and won a bronze medal in the 4x100m relay.

As a result of Johnson’s positive drug test at Seoul 1988, the federal government of Canada established a Commission of Inquiry to investigate the use of banned substances in Canadian sport, led by Chief Justice Charles Dubin. The Dubin Inquiry started in January 1989, went for 91 days, included 122 witnesses, with 46 athletes admitting to steroid use and costing the Canadian taxpayers $5 million. On June 12, 1989 Johnson was the last to testify and told the inquiry: “I lied. I lied and I was ashamed for my family, my friends, other Canadian athletes. I was just in a mess.” Time would prove that five of the other seven runners in the 100m final at Seoul 1988 were eventually caught cheating during their career.

After his track running days were over, Johnson continued to live in the Toronto area spending time with his daughter and grandchildren. He was involved in various business ventures and wrote his memoir “Seoul to Soul: Autobiography”. His celebrity status diminished in Canada but still shone bright in many other countries and travelled extensively making appearances. His father figure Charlie Francis died in 2010 at age 61 from non-Hodgkin lymphoma.

In 1985, Johnson won the Norton Crowe Award for Male Athlete of the Year. In 1987, he won the Lou Marsh Trophy and Lionel Conacher Award, was named the Associated Press Athlete of the Year, and made a member of the Order of Canada. Johnson was inducted into the Canadian Olympic Hall of Fame in1988.