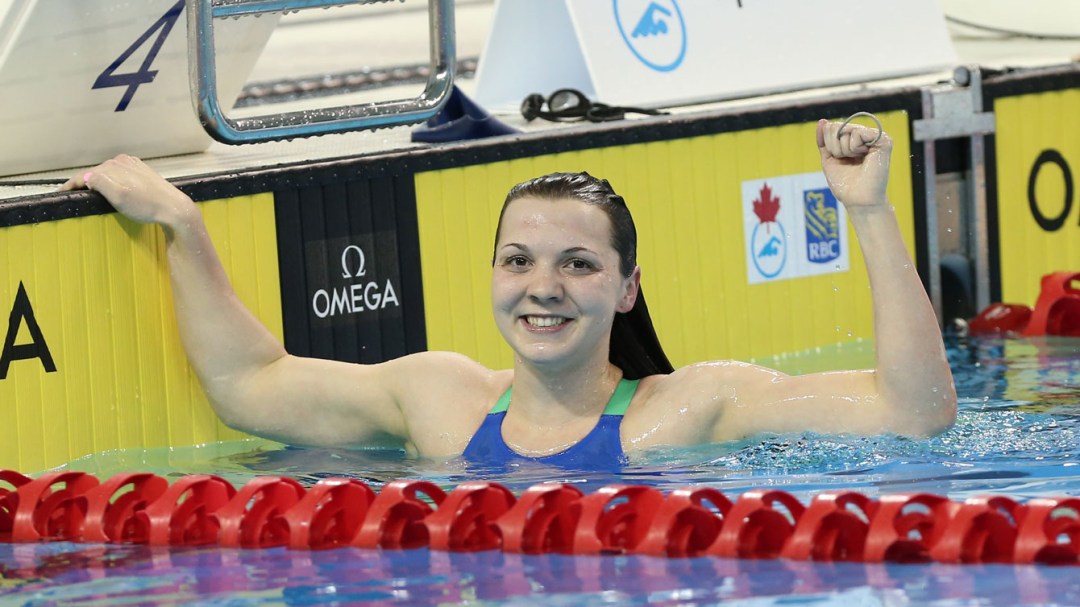 Brittany MacLean made her first senior national team in 2011, the same year she won four medals at the FINA World Junior Championships, including 200m and 400m freestyle gold. At London 2012 she advanced to the 400m freestyle final and helped the 4x200m freestyle relay team to fourth place. For her efforts she was named 2012 Canadian Junior Female Swimmer of the Year. In 2013 Maclean finished fourth in her three individual events at the Universiade while winning a pair of relay bronze medals. In 2014 she won her first major international individual medal, taking 800m freestyle bronze at the Commonwealth Games. Her breakout season continued at the Pan Pacifics where she won bronze in the 800m and 1500m freestyle while setting national records in both. She was named Swimming Canada’s Female Athlete of the Year. She also had her most successful year for the University of Georgia, setting NCAA records to win the 500 yard and 1650 yard freestyle events and helping the Lady Bulldogs to their second straight national title, earning her Swimmer of the Meet honours at the NCAA Championships. Despite an earlier injury, MacLean qualified for the 2015 Pan Am Games where she won bronze as the anchor of the 4x200m freestyle relay team and just missed the podium in the 800m freestyle. At Rio 2016, MacLean swam the third leg of the 4x200m freestyle relay that won bronze in national record time and posted a fifth place finish in the 400m freestyle. She announced her retirement in late October 2016, ending her career as the Canadian record holder in the 200m, 400m, 800m and 1500m freestyle events.

Family: Mother Michele… Older sister Heather was also a member of the 2012 Olympic Team and has been her biggest inspiration… Getting into the Sport: Started racing competitively at age 7… Outside Interests: Completed her junior year at the University of Georgia, studying Sport Management… Odds and Ends: Nickname: BMAC, Britt… Suffered a shoulder injury at age 13 that has bothered her on and off over the years…