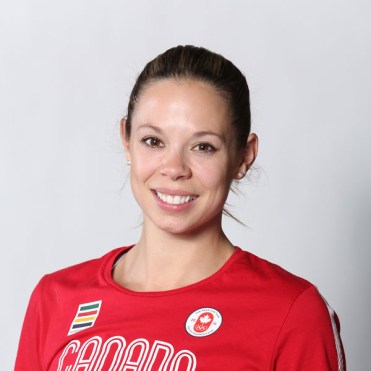 Brittney Page joined the senior national team in 2009. Since 2012, she has served as team captain. At Guadalajara 2011 she was part of the first Canadian women’s volleyball team to compete at the Pan Am Games since Winnipeg 1999. Page has played in more than 100 international games, including two appearances at the FIVB World Championships in 2010 and 2014. In 2014 she led Canada to a sixth place finish at the Pan Am Cup, the team’s best result at the event in a decade. Page has played professionally in Austria, Spain, Finland, Belgium, and Germany.

Family: Parents Denby and Sheri Page… Older sister Lindsay-rae, older brother Steven… Getting into the Sport: Started playing volleyball at age 14 because her sister played and she tried to emulate her every move… Olympic dream began when she played on the national youth and junior teams, opening her to the experience of competing internationally… Outside Interests: Graduated from Eastern Washington University in 2007 with a Bachelor of Arts in Children’s Studies… Enjoys reading, marathoning a good TV show, learning about new cultures and new languages… Likes spending time in nature, hiking or swimming at a lake… Odds and Ends: Favourite quote: “Competitive sports are played mainly on a five-and-a-half inch court, the space between your ears.” – Bobby Jones… Pregame routine includes a nap, some pump up tunes, good coffee… Always travels with her coffee mug… Has specific earrings she wears for games… Collects jewelry from her travels… Nicknames: Britty, Brick…

Megan Timpf has been part of the Women’s National Team program since 2005 when she joined the Development Team. She...

Sara Riske began her collegiate career at Eastern Arizona College, where in her freshman year her .519 batting average was...

Brenna Sanderson has wanted to play for Canada since being asked to try out for the junior national team. She...