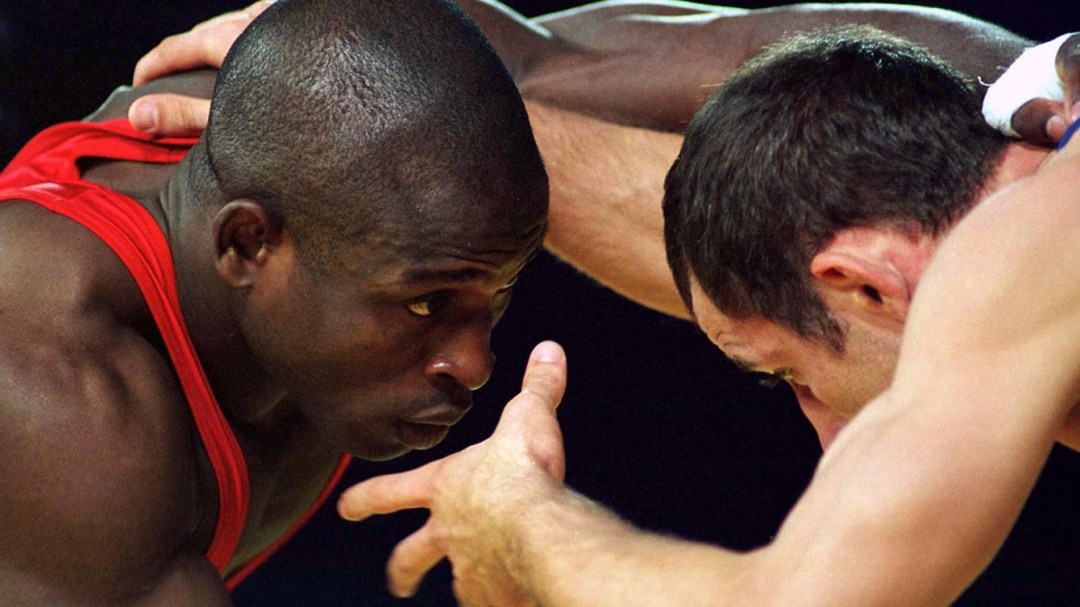 Baraladei Daniel Igali was a reigning world wrestling champion when he arrived at Sydney 2000 to face one tough opponent after another in the 69kg weight category. It took a judge’s decision for him to even make it out of the elimination pool and he won both his quarterfinal and semifinal matches in overtime. The final was close at the halfway mark, when Igali scored a two-point “gut wrench” and raised the final score to 7-4, defeating Russia’s Arsen Gitinov to win the gold title. It was the first time a Canadian had ever won an Olympic gold medal in wrestling. So overwhelmed with pride and all he had been given from his new home and country, Igali spontaneously laid the Canadian flag on the wrestling mat and ran around it before kneeling down to give it a kiss. Tears of joy flowed from his eyes as the national anthem was played after the gold medal presentation. At Athens 2004, Igali was defeated by eventual bronze medalist Iván Fundora of Cuba in the quarterfinals and placed sixth.

Igali was incredibly fit with a 32-inch vertical jump and 420lb bench press. Switching to the middleweight division, Igali won gold at the 2002 Commonwealth Games. He finished fourth at the 1998 World Championships and in 1999 he won bronze at the Pan American Games and became the first Canadian male to win a world freestyle wrestling title.

Igali was born and raised with 20 siblings in one of the poorest rural areas of Nigeria. As a member of the Ijaw tribe, wrestling was part of his culture and he was inspired to excel when 1984 Nigerian Olympic wrestler Appah Macauley visited his village. He won his first national title in freestyle in 1990 and again in 1991, 1993 and 1994. Igali was the Nigerian Greco-Roman champion in 1991 and 1993, and African freestyle champion in 1993 and 1994. It was while representing Nigeria at the 1994 Commonwealth Games in Victoria, BC that, due to political unrest in his home country, he claimed refugee status to stay in Canada, becoming a citizen in 1998. Igali studied and wrestled at Douglas College and Simon Fraser University in British Columbia, completing a Master of Arts degree in criminology and going undefeated in 116 matches at the collegiate level through 1999.

Upon retiring from competition after Athens 2004, Igali used his Olympic status to help people in Nigeria. In 2002, he established the Daniel Igali Foundation with the dream of opening a school in his native Eniwari, Nigeria which he accomplished in 2006. The “Maureen Matheny Academy” (a school focused to combine sports with academics) was named in honour of the Canadian elementary school principal who became his surrogate mother when he chose to start a new life in Canada. It was also the year Igali was robbed and stabbed while back in his native home Bayelsa State, Nigeria, narrowly escaping death.

Igali had an unsuccessful run for political office in British Columbia, but later became a member of the House of Assembly in Nigeria’s Bayelsa State in 2011. A tireless advocate for change in his native country, Igali has coached the Nigerian wrestling team at Beijing 2008, London 2012 and Rio 2016, became president of the Nigeria Wrestling Federation, and chairman of the technical committee of the Nigerian Olympic Committee. His life and wrestling career was presented in the CBC television documentary “Wrestling with Destiny: The Life and Times of Daniel Igali”.