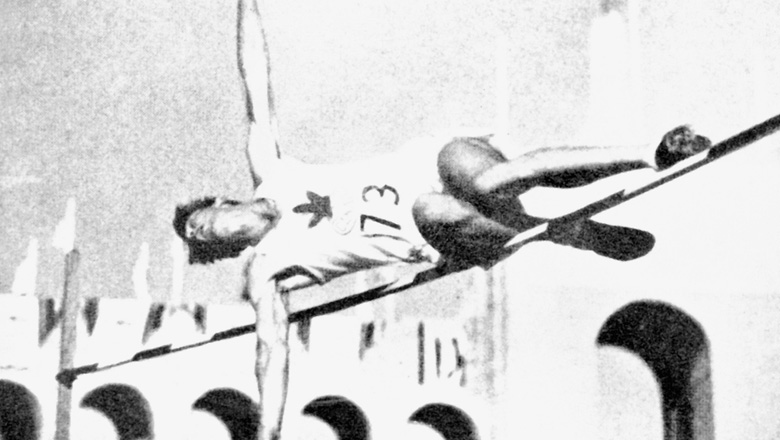 Duncan McNaughton was not even on the Los Angeles 1932 Olympic team when he found himself trying to convince the Canadian Olympic officials in California to allow him to compete for Canada, until they finally relented. He soon found himself in a four-way tie for first, including with his close friend and college teammate American Bob Van Osdel, who ended up giving him some technique advice, which paid off. The high jump final lasted well over three hours and in the tie-breaking round, none of the competitors were able to clear 2.00m (6’6”) or 1.99m (6’5¾”)  but, unlike the others, McNaughton was able to repeat his 1.97m (6’5½”) height and thus took the gold medal (Van Osdel settled for silver). His gold medal was only one of two won by Canadians at Los Angeles 1932, the other being Horace Gwynne in bantamweight boxing. In 1933, McNaughton’s Olympic medal was stolen and Van Osdel, a dentist, made a mold of his own silver medal, poured it in gold and sent the replica to McNaughton.

Born the only child of a teacher and a civil engineer in Cornwall, Ontario, McNaughton grew up in Vancouver, British Columbia where he attended King Edward School. He was a provincial champion basketball player in BC before he focused on high jump. McNaughton competed at the 1930 British Empire Games but was disqualified for using the illegal “diving” western-roll. After a year of studying at the University of British Columbia, McNaughton enrolled at the University of Southern California (USC) in Los Angeles in 1930 with plans to pursue medicine and train properly for the high jump. During his second year of pre-med studies, he changed his major to geology. A 1933 NCAA champion, McNaughton graduated from USC and retired from sport. In 1935, he earned a master’s degree from the California Institute of Technology, followed by a Ph.D. from USC.

McNaughton worked for the Geological Survey of Canada, explored for oil in South America and served with the Royal Canadian Air Force during World War II flying 57 missions over enemy territory and receiving the Distinguished Flying Cross and Bar. He spent several years as a visiting professor at USC then worked in the petroleum industry as a geologist. For many years, the focus of his work discovered the largest flow of gas encountered onshore in Australia.

Passing in 1998 in Austin, Texas, The Duncan A. McNaughton Memorial Grant is awarded annually to a graduate student by the American Association of Petroleum Geologists.