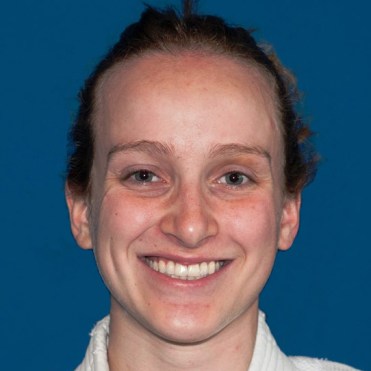 Erin Morgan won her first senior national title in 2015. She had been competing at the senior nationals since 2012, the same year she won bronze in the U-20 division at the Canadian championships. In 2013 she won the U-21 national title and competed at the IJF World Junior Championships. Morgan’s career highlight is winning bronze at the 2014 European Cup event in Tampere, Finland. Her multi-sport competition experience includes the 2011 Canada Winter Games where she won a bronze medal.

Family: Parents Scott Morgan and Patricia Dyment… Older sister Megan… Getting into the Sport: Started in judo at age 8, introduced to it by her parents who run the Canmore Judo Club… Outside Interests: Pursuing degree in kinesiology at the University of Calgary… Enjoys cooking, yoga, hiking… Works as a waitress when not training… Odds and Ends: Personal motto: “I will”… Talks herself into ready mode before competing… Role model is her coach, Laurie Wiltshire, who competed at Guadalajara 2011… Considers coach Garry Yamashita to be her good luck charm… Is close with members of the French team after spending a few months training in France…

Braxton Stone-Papadopoulos has enjoyed international success at all levels, beginning when she won bronze at the 2012 Cadet World Championships....