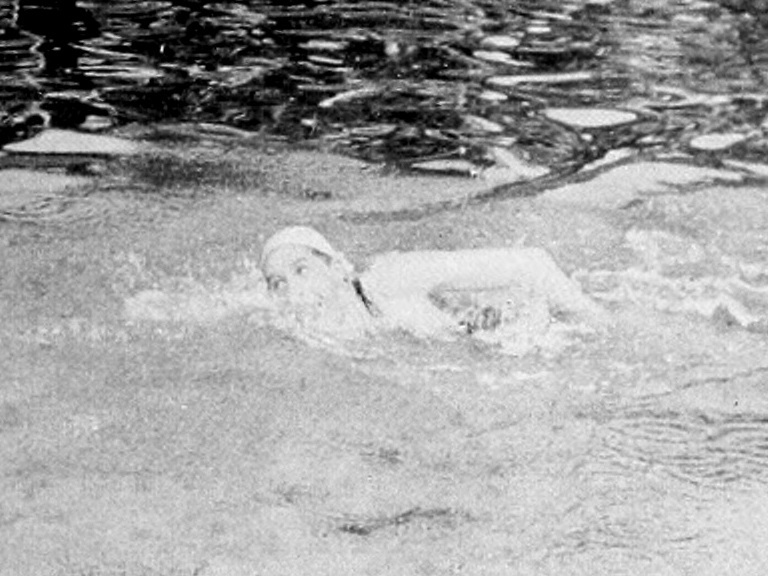 George Hodgson was Canada’s only swimmer at Stockholm 1912. In an unprecedented performance, he set four world records in the 1500m freestyle at the Games. Hodgson set a world record of 22 minutes 23.0 seconds in the preliminary heats and in the final, his time at the 1000m mark of 14:37.0 set the record for that distance. Then at 1500m he shattered his own record by 23 seconds and continued swimming another 109m breaking the world record for the mile. His 1500m freestyle world record stood for 11 years. In addition to his gold medal, Hodgson was awarded the Challenge Trophy for the 1500m freestyle title, donated in 1908 by the Italian Count and International Olympic Committee Member, Eugenio Brunetta d’Usseaux. Four days later in the 400m freestyle, Hodgson won his second gold medal of the Games setting an Olympic record. He was Canada’s only swimming Olympic gold medalist until 1984. At Antwerp 1920, Hodgson arrived at the Games out of shape having returned from the war untrained and competed in the 400m and 800m freestyle events failing to make the finals.

Hodgson never had a swimming lesson or coach but practiced in the summers at his family’s cottage in the Laurentians. Due to his family’s affluence, he gained membership to the one of the best indoor pools in the country in Montréal. Hodgson became well known when he went undefeated at the Canadian Championships from 1910-12. Representing Canada at the 1911 Festival of the Empire Games, Hodgson defeated the world record holder over the one mile distance.

A student at McGill University, Hodgson swam and played polo before graduating in 1916. He travelled to England during World War I, where he served in the Royal Air Force (RAF), winning several awards for his rescues made at sea and was awarded the Air Force Cross in 1918. He retired from swimming to form an investment brokerage firm.