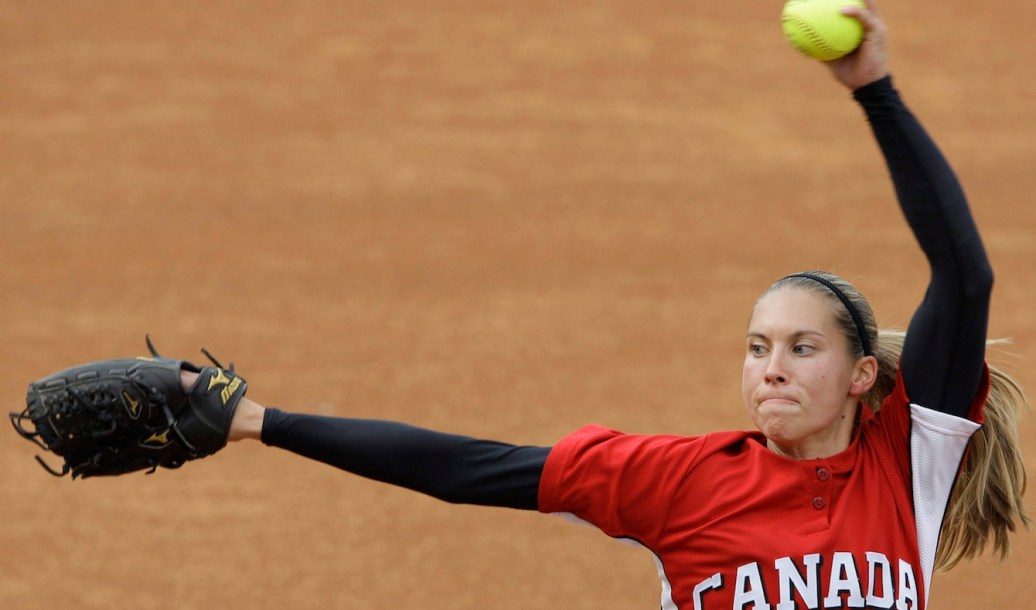 Lauren Regula’s first appearance with Team Canada came at the 1999 Junior World Championships in Taipei. She joined the senior national team in 2002, helping Canada to a ninth-place finish at the world championships. She made her Olympic debut at Athens 2004, starting five games and being in the winning pitcher in all three of Canada’s victories.

Following a fifth-place finish at the 2006 World Championships, Regula missed the entire 2007 season with a wrist injury. But she was healthy enough to return to the Olympic Games at Beijing 2008, helping Canada to a fourth-place finish as she recorded two victories.

After the heartbreaking loss in the bronze medal game in Beijing, Regula retired and didn’t pick up a ball for eight years. She started a family, having three kids. She has since been open about the postpartum depression she began to suffer from in 2012. It continued until 2018 when she says she hit “rock bottom” and finally got the help she needed in the form of therapy and hormone therapy. After a long road to recovery, she has said she feels like she has “a new lease on life”.

It was in 2016, while she was still struggling with postpartum depression, that Regula came out of retirement and pitched her way back to a starting role with Team Canada, winning a bronze medal at the WBSC World Championships. In late 2018, she suffered a small tear in her left hip labrum and did not throw again until she was invited to join Canada’s training camp from which the 2020 Olympic team would be selected.

Regula played collegiately at Oklahoma State University, primarily as a pitcher but also in the outfield when not on the circle. Over her four seasons with the Cowgirls she was a member of the All-Big12 conference team each year. In her senior season in 2003, she struck out 451 batters on her way to a 26-10 record, was awarded the OSU Female Athlete of the Year and named a First Team All-American. After having finished at OSU, Regula joined the National Pro Fastpitch league for two seasons. She posted the first no-hitter in Chicago Bandits history in 2005 on her way to a 17-1 record, earning Pitcher of the Year honours.

A Little More About Lauren

Getting into the Sport: Started playing softball at age 11… At 16, joined the White Rock Renegades, a team located 8 hours away from home… Originally wanted to be an outfielder, enjoyed being able to slide around and make diving catches… Outside Interests: Graduated from Oklahoma State University in 2004 with a degree in International Business… Owns and runs TrAk Athletics, a fitness business for both Akron locals and virtual members, with her husband… Started the “Strong Mom Strong Family” program which ties in identity, habits, and lifestyle to help moms be the best version of themselves… Uses meditation and journaling to help her be her best self… Odds and Ends: Husband David was a placekicker at Dartmouth College, finishing as the second leading scorer in school history… Older brother Jason Bay played for five MLB teams and was 2004 NL Rookie of the Year… Uncle Gerry Moro is a two-time Canadian Olympian (1964, 1972) in the decathlon… Favourite motto: “Inaction breeds doubt and fear. Action breeds confidence and courage. If you want to conquer fear, do not sit home and think about it” -Dale Carnegie… Athletic role models include Hayley Wickenheiser, Kerri Walsh Jennings, and teammate Danielle Lawrie – all moms who are competing in their sport…