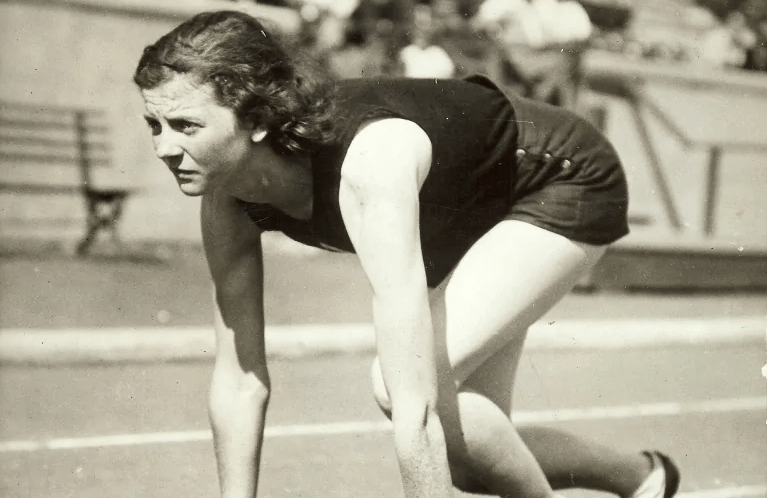 With only six teams entered in the 4x100m relay at Los Angeles 1932, the event went straight to a final, and Canada’s Lillian Palmer Alderson won a silver medal alongside Mary Frizzell, Mildred Fizzell and Hilda Strike. She was not only one of British Columbia’s first female Olympians, but also one of their first female Olympic medalists. Two years later, Palmer Alderson was a member of the medley relay team (220-110-220-110 yards) that won gold at the 1934 British Empire Games and she finished fourth in the 220 yard race.

A native of British Columbia, Palmer Alderson started running in the 1920s, and while attending Lord Roberts Public School in 1927, she won her first medal and was named “Girl’s City Champion.” (the “Boy’s City Champion” that year was Percy Williams). In 1929, as a member of coach Graham Bruce’s High School of Commerce track team, she was running faster sprint times than the Canadian Olympic team members at Amsterdam 1928. In 1930 she set an unofficial world record over 50 yards with a time of 5.8 seconds, won the “Century Sprint,” (just four tenths of a second off Bobbie Rosenfeld’s world record time) and became the intermediate Canadian champion in the 60m, 100m and sprint relay team. After Los Angeles 1932, Palmer Alderson ran in a post-Games meet “The British Empire vs. USA” and her relay team, composed of British and Canadian athletes, defeated the Americans who had just won the Olympic gold in record time. A multiple provincial and Canadian champion, Palmer Alderson was flag bearer and captain of the Canadian team at the 1934 Women’s World Games held in London, England, finishing fourth in the 200m.

Palmer Alderson retired from running in 1934. She passed away in Vancouver in 2001 at the age of 87. She was inducted into the British Columbia Sports Hall of Fame in 1969 and Canadian Olympic Hall of Fame in 1982.