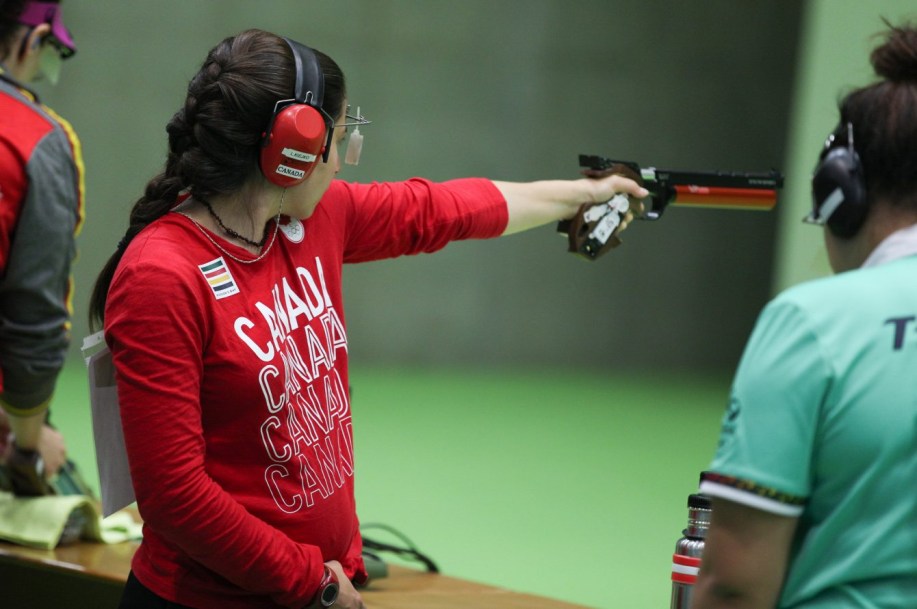 Lynda Kiejko comes from a shooting family with a great Olympic legacy. Her late father Bill Hare competed at the Tokyo 1964, Mexico City 1968 and Munich 1972 Olympic Games. Her sister Dorothy Ludwig became an Olympian at London 2012 after competing at the 2007 and 2011 Pan Am Games. They competed together at the 2010 and 2014 Commonwealth Games, creating a moment to remember in 2010 when the sisters won bronze in the 10m air pistol pair event. Kiejko made her own Olympic debut at Rio 2016 where she competed in the 10m air pistol and 25m pistol events.

Kiejko experienced one of her proudest moments when she won 10m air pistol gold at the 2018 Continental American Championships. By being present in the moment, she had what she calls the “perfect match” to secure an Olympic spot for Canada for Tokyo 2020. After giving birth to her third child in September 2019, Kiejko competed at the national trials just four months later and claimed that Olympic spot for herself.

A Little More About Lynda

Getting into the Sport: Started pistol shooting at age 11, following her father’s passion… Was asthmatic and not a physically gifted athlete as a child but shooting sports gave her an opportunity to focus her mind… Has wanted to represent Canada since hearing her father’s stories of going to the Olympics and the places he travelled for competition… Was very young when he stopped competing so it was only after she started shooting that she realized he was a three-time Olympian… Made her first national team in 1999… Outside Interests: Graduated from the University of Alberta in 2003 with a Bachelor of Science in Civil Engineering; works as a Senior Civil Engineer… Enjoys camping with her family …  Learns how to say ‘thank you’ in the language of the country she is visiting… Volunteers with the Kids Ministry at Calgary Life Church… Odds and Ends: Listens to music before competing to remind her of her training and to relax… Always travels with a lucky loonies from the 2003 Pan Am Games (her first major competition) and the 2016 Olympic Games…

Jim Sandall competed at his first ISSF World Championships in 2010