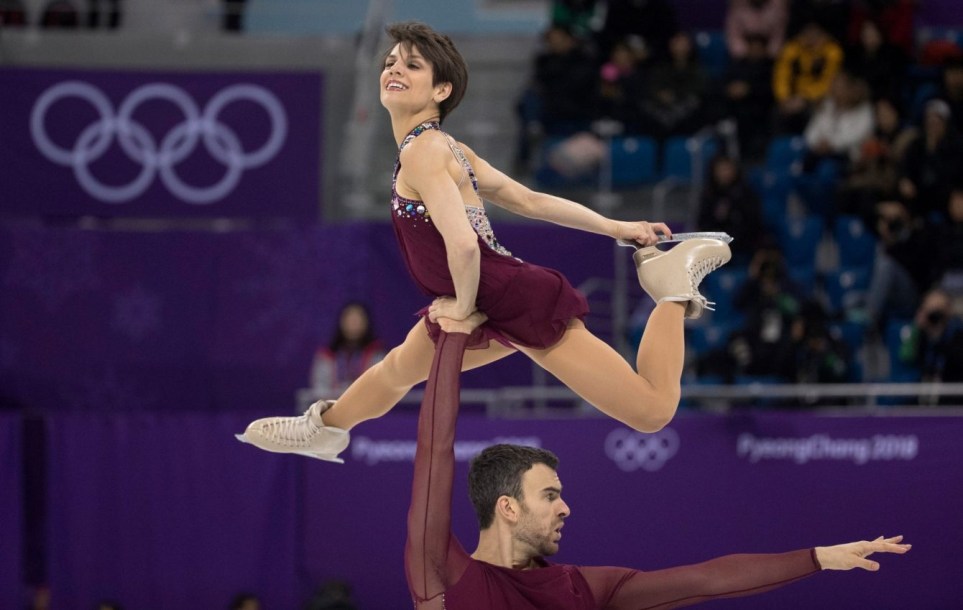 Duhamel and Radford won back-to-back world titles in 2015 and 2016, making them the first Canadian pair to successfully defend their world gold medal since Barbara Wagner and Robert Paul won four straight from 1957 to 1960. Their first world title capped an undefeated season that included wins at both of their Grand Prix events, the Grand Prix Final and the Four Continents Championships.

Duhamel and Radford had previously won bronze medals at the 2013 and 2014 World Championships, the latter coming after they had helped Canada win silver in the inaugural Olympic team event in Sochi.  Duhamel had competed in both pairs and singles at the national level, but began to take pairs more seriously when she teamed with Craig Buntin in 2007. They competed at the world championships in 2008 and 2009 but finished third at the 2010 Canadian Championships, leaving them shy of qualifying for Vancouver 2010. Buntin announced his retirement a few months later, leaving Duhamel unsure about her future.

At the suggestion of coach Bruno Marcotte, Duhamel had a tryout with Radford, who had also had a few partners. The two skaters had never thought about teaming up, even though they were both from small northern Ontario towns. They each have strong individual technical skills from competing as singles. That background allows them to include the most difficult of triple jumps amongst the pair skaters, triple Lutzes. They added a quad throw Salchow to their repertoire in 2014-15.

Radford battled through a herniated disc at the 2017 World Championships, which forced the pair to alter some elements in their programs and contributed to their seventh-place finish. In December 2017, they won bronze at the Grand Prix Final, the fourth straight year they stood on the podium at that event.

A little more about Meagan

Getting into the Sport: Started skating at age three… Between her cousins’ hockey games, her uncles’ hockey games and the teams her dad was coaching along with her sister figure skating she was always at the rink so it made sense for her to skate…  Was 10 when she started to take private lessons… Moved away from home at 14 to pursue her skating in Barrie… Both parents worked two jobs to finance her skating… Outside Interests: Vegan since 2008; after reading a book on veganism, she cleaned out her kitchen and decided to change her life… Has since studied holistic/naturopathic health and became a certified holistic nutritionist in 2012… Always has to travel with her own homemade food… Enjoys yoga, tennis, kayaking, baking… Has two rescue dogs: a beagle named Theo and a dachshund mix named Mootae; adopted the latter from Korea while attending the 2017 Four Continents Championships… Odds and Ends: Husband and coach Bruno Marcotte competed in pairs at the 2002 World Championships… Remembers watching the figure skating at Lillehammer 1994, dancing around the living room and telling everyone that one day she would go to the Olympics, including pen pals around the world… After watching Tara Lipinski win gold at Nagano 1998 she began dreaming of having the performance of her life at the Olympic Games… Favourite motto: ”When the going gets tough, the tough get going.”