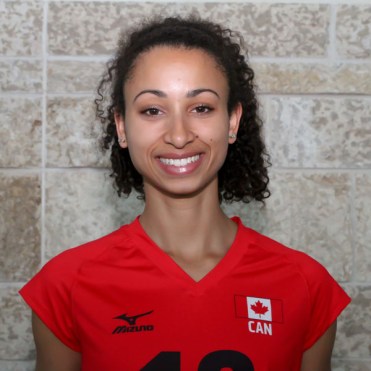 Marcelle joined the national youth volleyball team in 2006 and competed at that year’s NORCECA Youth Championship before taking a few years to play internationally in beach volleyball. It was in that sport that she competed at the 2007 World Youth Championships and the 2010 World Junior Championships. At the same time, she was playing the indoor game collegiately with the UBC Thunderbirds, winning five straight CIS Championships (2009-13) as well as two CIS Player of the Year awards (2011, 2013). In 2011 she was named CIS Championship MVP and in 2013 she won the BLG Award for CIS Female Athlete of the Year across all sports. Marcelle joined the senior national team in 2011. In 2013 she began playing professionally in Dresden, Germany and in 2014 she helped her team win the league championship, as well as representing Canada at the FIVB World Championship.

Family: Parents Roger and Tracy Marcelle… Older sister Tanisha, younger brother Jordan… Getting into the Sport: Started playing volleyball at age 11… Outside Interests: Graduated from the University of British Columbia in 2013 with a degree in Kinesiology… Takes her mind off volleyball by painting and drawing… Odds and Ends: Favourite motto: “The starting point of all achievement is desire”… Always listens to loud music before a game… Always travels with her journal… Nicknames: Shan…