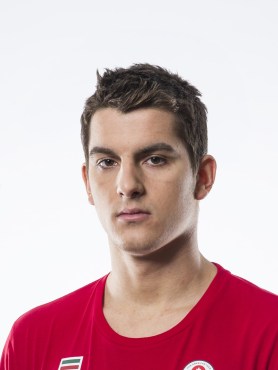 Stefan Milosevic was named to his first senior national team and earned a spot at the TORONTO 2015 Pan Am Games after finishing third in the 200m freestyle at the 2015 Canadian Trials. The national champion in the 200m freestyle in 2013, Milosevic competed at that year’s FINA World Junior Championships where he was a member of two fourth-place freestyle relay teams. He also began training at the Swimming Canada High Performance Centre in Vancouver in 2013. Milosevic represented Canada for the first time at the 2012 Junior Pan Pacific Championships.

Family: Parents Goran and Snezana Milosevic… Older brother Milan… The family moved to Canada from Serbia for a better future for their sons… Getting into the Sport: Started swimming at age 4 with the Barrie Trojans… Favourite Olympic moment is watching Jason Lezak swim the anchor leg for the USA’s come-from-behind victory in the 4x100m freestyle relay at Beijing 2008… Outside Interests: Completed second year at the University of British Columbia (Computer Science)… Enjoys fishing… Odds and Ends: Nickname: Homeschool… Able to juggle…