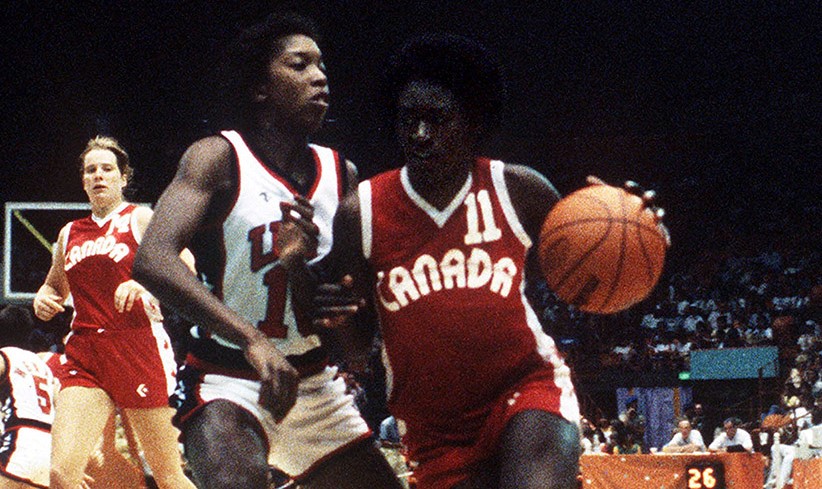 Sylvia Sweeney was on the Canadian basketball team at Montréal 1976, finishing sixth. Eight years later at Los Angeles 1984, she was a member of the team that finished just off the podium, losing to China 63-57 in the bronze medal game, finishing fourth.

Becoming known as “Canada’s First Lady of Basketball”, Sweeney joined the national team in 1974 and spent a decade as a key member including serving as captain from 1979-84. She was voted the Most Valuable Player at the 1979 World Championships in Seoul, won a bronze medal at the 1979 Pan American Games where was the Canadian team flag bearer, and was a member of the bronze medal winning team at the 1979 World Student Games in Mexico.

The daughter of music teacher Daisy and railway cook James, Sweeney is the niece of jazz musician Oscar Peterson. In 1973, she studied in the Department of Performance (classical piano) at McGill University and played basketball for the McGill Martlets. She also played for the national finalists Concordia Stingers (1977), Laurentian University Lady Vees (1978-79) where she won the collegiate championship (1979).

Sweeney was a member of the local organizing committee for the 1994 Men’s World Championships in Toronto, director of the Toronto Raptors in the National Basketball Association, and served as the assistant chef de mission for the Canadian team at Atlanta 1996. She pursued a career in television, first in sports then in current affairs and production. The founder of Elitha Peterson Productions Incorporated and International Performing Arts for All, Sweeney produced numerous award winning documentaries. She founded the Art Games which celebrates the world’s finest artists in five art forms: Media Arts, Literature, Visual Arts, Dance and Music.

Annually, Canadian Interuniversity Sport and TSN present the “Sylvia Sweeney Award” to a Canadian women’s university basketball player who best exemplifies the values of athletics, academics and community involvement. In 2017, Sweeney was appointed a Member of the Order of Canada for her “long-standing commitment and creative leadership at the nexus of art and sport through her documentaries and world-stage productions.”