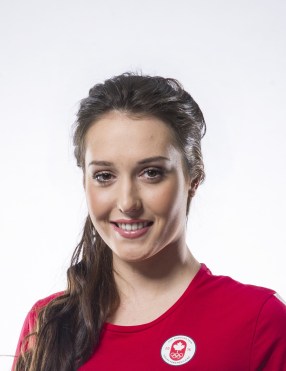 As the daughter of a two-time Olympic gold medallist, Tabitha Baumann has to look no further than her own father Alex for inspiration. After competing at the FINA World Junior Championships in 2011 where she won silver as part of the 4x200m freestyle relay, Baumann qualified for her first senior national team in 2014. She competed in her specialties, the long distance freestyle events, at both the Commonwealth Games and the Pan Pacific Championships. She won the 800m freestyle and finished second in the 400m freestyle at the 2015 Canadian Trials.

Family: Father Alex Baumann won gold medals in the 200m IM and 400m IM at Los Angeles 1984 and is now the Chief Executive of High Performance Sport New Zealand… Mother Tracy Baumann… Older brother Ashton represented Canada at the 2013 FINA World Championships in swimming… Moved to Ottawa at age 11 when her father was hired to lead Road to Excellence (then the summer version of Own the Podium)… Has also lived in Edmonton… Getting into the Sport: Learned to swim at age 2… Started swimming competitively at age 12 when her father told her she had to do a sport to stay active… Gave it a try after moving to Canada… Outside Interests: Pursuing Bachelor of Arts in psychology… Enjoys painting, watching movies and travelling… Odds and Ends: Nickname: Tab… Always travels with a stuffed animal she’s had since she was 3… Favourite quote: “You always feel pain. You don’t always have to fear it.”

Often told he looks like his double Olympic gold medallist father, Ashton Baumann is set to become an Olympian himself...