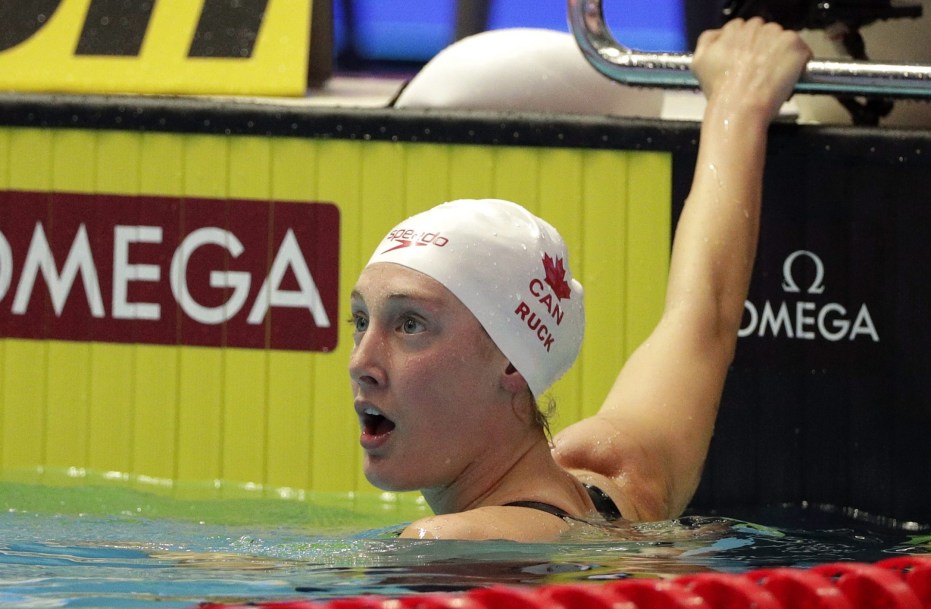 In her Olympic debut at Rio 2016, Taylor Ruck won bronze medals with the women’s 4x100m and 4x200m freestyle relay squads, making her and teammate Penny Oleksiak the first ever Olympic medallists born in the 2000s.

Later in 2018, Ruck became the first Canadian swimmer to win five medals at a single edition of the Pan Pacific Championships. The big highlight was her victory in the 200m freestyle, in which she swam a championship record time of 1:54.44 to defeat reigning Olympic champion Katie Ledecky of the United States. She also won silver in the 200m backstroke, bronze in the 100m freestyle and bronzes in the 4x100m and 4x200m freestyle relays.

Ruck debuted at the FINA World Championships in 2019. She swam in the finals of the women’s 4x100m and 4x200m freestyle relays, helping set Canadian records to win bronze in both. She also swam in the preliminaries for the women’s 4x100m medley relay that would win bronze. Individually, she placed fourth in the 100m backstroke and fifth in the 100m freestyle and 200m backstroke.

Despite growing up in Scottsdale, Arizona, where her family moved when she was just a year old, Ruck has wanted to represent Canada since childhood. When her family would visit her grandparents in Kelowna, she and her brother trained with the Aqua Jets, the same team her mother swam for as a teenager, prompting her Canadian dream. She had her first opportunity to wear the maple leaf at the 2015 FINA World Junior Championships in Singapore, winning six medals. Ruck won gold in both the 100m freestyle and 200m freestyle, breaking the championship record in both. Two years later, she won five relay gold medals at the 2017 World Juniors as well as a gold in the 200m freestyle and silver in the 100m backstroke. Her 13 career medals made her the most decorated athlete at the world juniors.

A Little More About Taylor

Getting into the Sport: Started swimming lessons at 11 months at Cactus Pool in Scottsdale… Her parents couldn’t keep her away from water; she would happily walk into the deep end of her grandparents’ pool… Started racing competitively in the USA swimming program at age 7… Outside Interests: Attended Stanford University for one year before moving back to Toronto to focus on training for Tokyo 2020… Might like to pursue nursing or biology in future studies… Enjoys making art, reading, exploring…  Odds and Ends: Nickname T-Ruck… Inspired by Missy Franklin because of her talent, hard work, great attitude, and Canadian background… Favourite motto: Never give up…

The daughter of two-time Olympic silver medallist Sandy Goss, Kennedy Goss is starting to make her own mark as an...