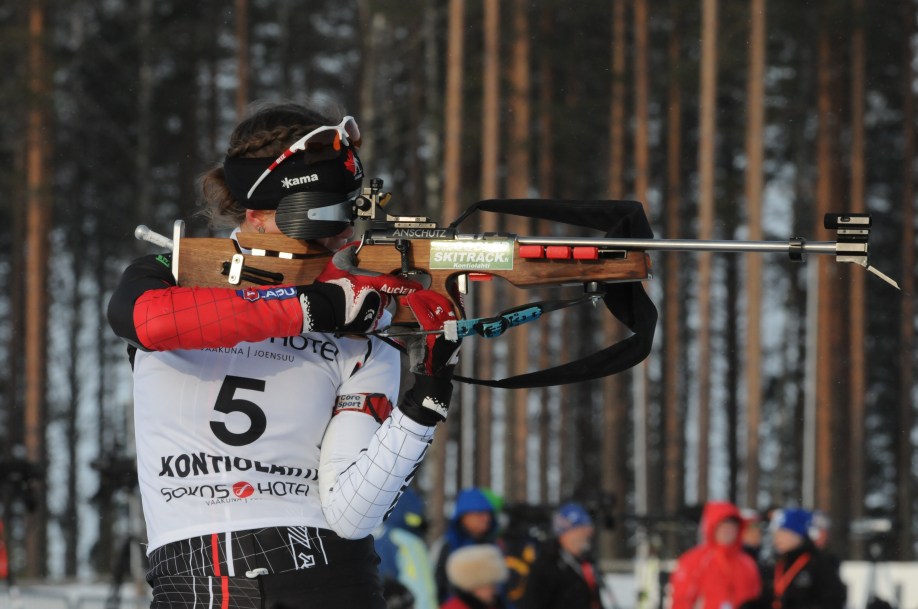 After racing some of the toughest competition on the circuit, 21-year-old Julia Ransom is back home in Canmore, Alta., for a month. But there’s no vacation booked.   Instead, Ransom plans to get a good chunk of training in before she heads east – to the biathlon world championship.

“I think that a top five and a podium are very attainable,” she says. “From the results this year, I’m hoping to go out with a junior world title.”

At the World Youth and Junior Biathlon Championships in Finnish Kontiolahti two year ago, Ransom came second. She also combined a cross-country world cup start with racing on the International Biathlon Union circuit.

“That has been a goal of mine to do both and that really proved it, I thought, to do a cross-country world cup and then go on and do biathlon races,” she notes.

The budding Olympic biathlete got her start on Telemark mountain in Kelowna, B.C.

“My parents would drag me up the mountain and I would be happy as long as I could go sledding and have hot chocolate after,” she says.

But the repeated mountain visits, and mugs of chocolate, paid off and Ransom joined the Telemark Cross Country Ski Club and went through the different programs until she got to racing.

But one day, as a 12-year-old, Ransom happened to ski by the biathlon range.

“A German man pointed at me and said, ‘Come try shooting.’ So I tried it, of course. What twelve-year old doesn’t like shooting a gun? And I was hooked after that.” Still, “a pure cross-country skier,” she figured that she would wing it. One of her really good friends also entered. During the race, Ransom felt a towering presence and looked back.

Cross-country skiing is making headlines, through athletes such as Len Valjas who happens to be very tall, but biathlon also seems to pick up a certain momentum around the Winter Olympics.

“There’s definitely not a lot of knowledge about the sport here, well not as much but it always picks up after the Olympics – people seem to watch it and it’s such a beautiful spectator sport that you get a little bit intrigued,” Ransom says.

Although she aspired to be a doctor in high school, it was the idea of competing in the Winter Games that stuck.

“The Olympics has been a goal for me for the past… since I was 10 probably and I thought this is the only way I can do it,” she says.

“That’s when I decided, as soon as I graduated, I got to take the next step and move to a training centre,” which prompted her move to Canmore.

Ransom’s dream is to represent Canada in both biathlon and cross-country skiing at the 2018 Winter Games in Pyeongchang.

Donate now to help our next generation of athletes achieve their Olympic dreams.

To support herself, she works as a sales rep for the family business Fusion Glassworks, often traveling to Calgary and Edmonton.

“I have learnt how to speak to people, just going in and making a cold call and I guess, learning how to deal with rejection,” Ransom says. “It’s been a really wonderful gig.”

And although she might have given up the idea of becoming a doctor, she takes correspondence courses, in business and sciences, through Athabasca University. “There are lots of hours in the day so you just got to use them,” Ransom says.

And for inspiration, she doesn’t need to look far.

“My niece, she was born with a very rare genetic disorder called Trisomy 18 and right there from the get go, she was told by doctors that she’s not going to live past two weeks,” she says and adds, “She’s going to celebrate her fifth birthday in May.”