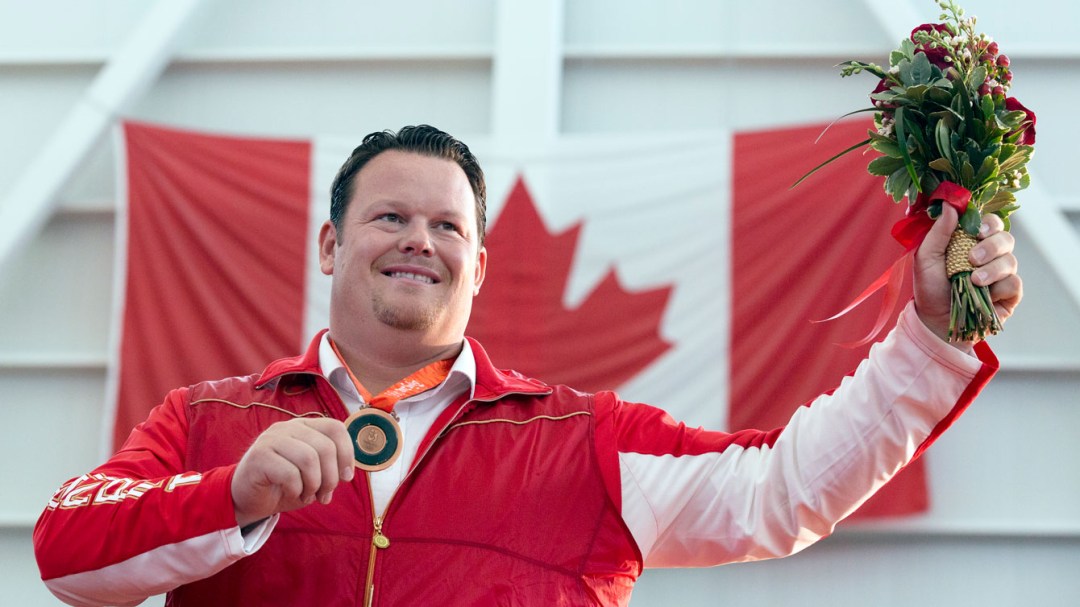 After waiting more than six years, Dylan Armstrong finally has the one piece of hardware to complete his collection, an Olympic medal.

“The journey to get to this moment started quite some time ago, and it never would have been possible if it wasn’t for the support of so many people.” 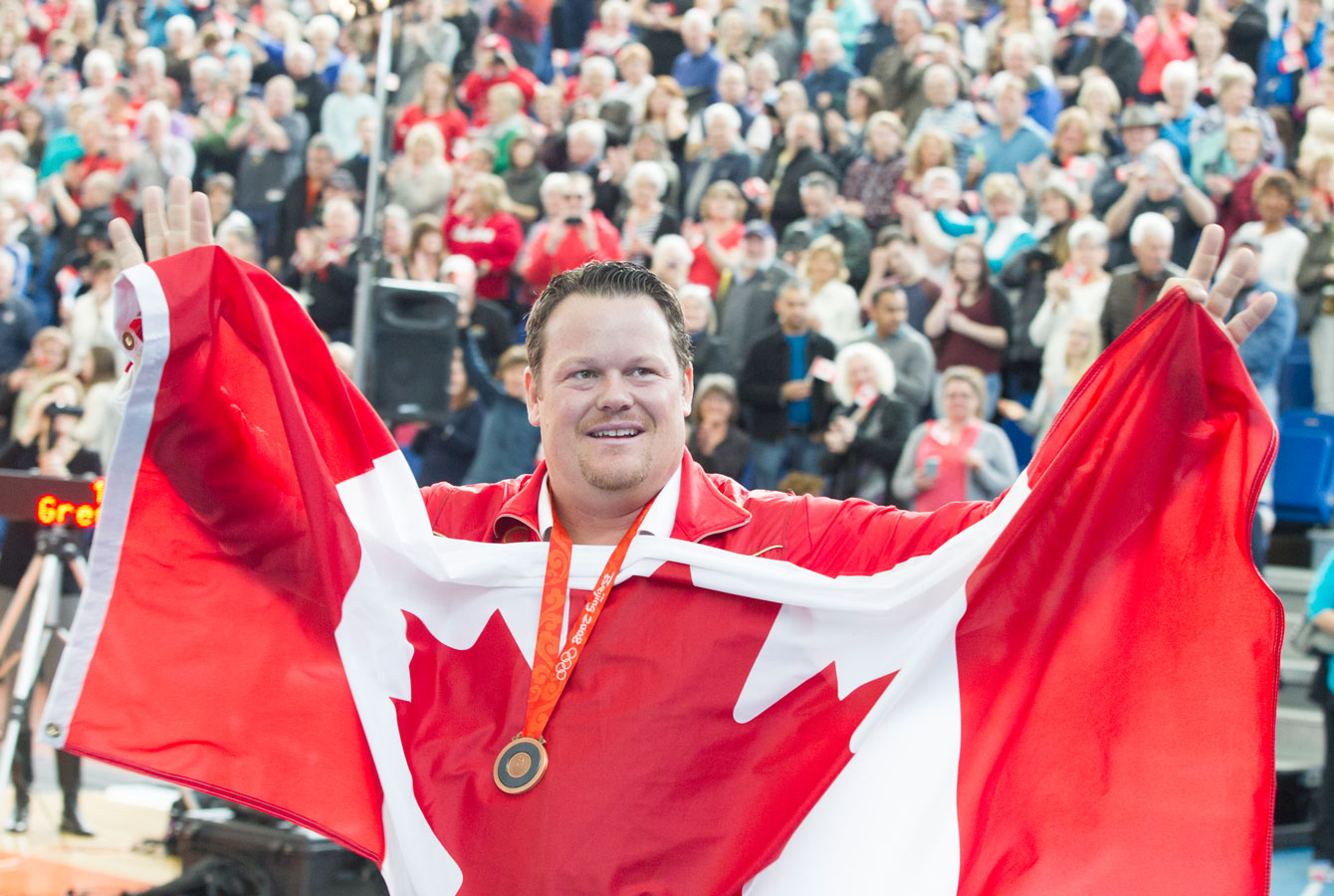 Dylan Armstrong unfurls the flag in front of a packed house at Tournament Capital Centre in Kamloops, BC after receiving his Beijing 2008 medal on February 15, 2015.

The 34-year old World Championship, Commonwealth and Pan American Games shot put medallist was denied the Olympic medal recognition in Beijing when Andrei Mikhnevich of Belarus beat him by one agonizing centimetre (21.05m to 21.04m) to the podium for bronze. Armstrong’s throw was a national record but not enough to see Canada’s flag raised for shotput.

“Thank you to my family, friends, sponsors, Own The Podium, and Athletics Canada for being behind me every step of the way.” 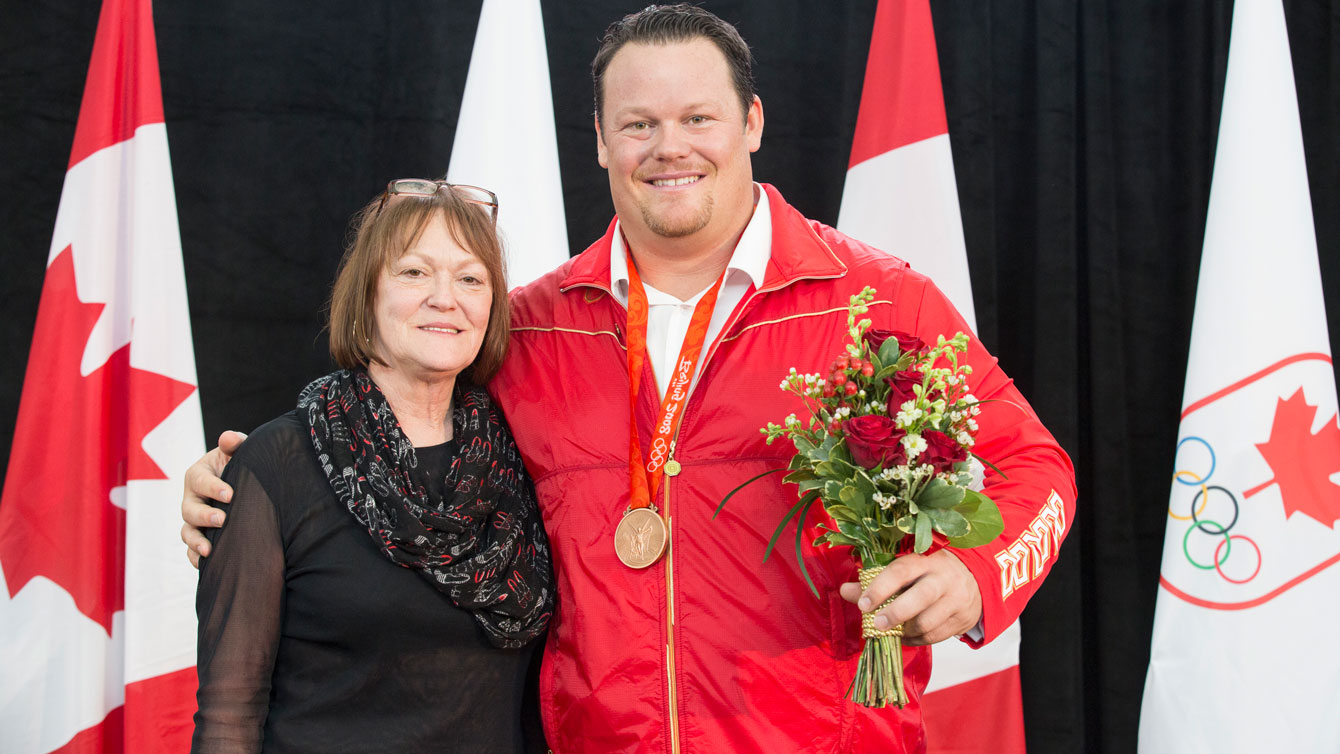 Dylan Armstrong with his mother Judy, who was a tireless planner for the medal ceremony.

But then came the news two years ago of Mikhnevich’s 2005 World Championships doping sample coming back positive. It was his second offence carrying a lifetime ban by his national federation and later upheld by global athletics’ governing body IAAF.

“Thank you to my coach, Dr. Anatoliy Bondarchuk for all that he has done for me as without him I would not be standing here today.” 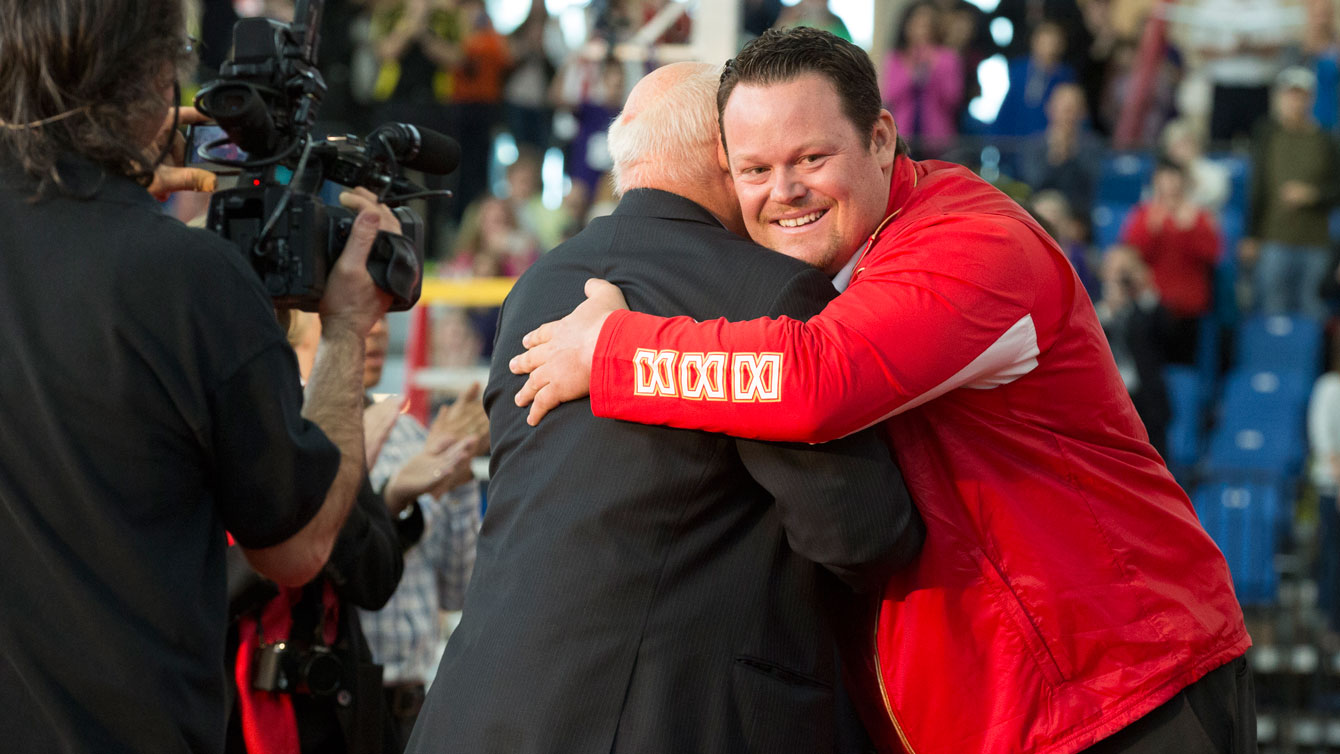 Dylan Armstrong embraces his coach Dr. Anatoliy Bondarchuk – “Dr. B.” – who switched him from the hammer throw to shotput. The rest is history.

That meant Armstrong, now elevated to third place at Beijing, had a complete set of senior competition medals. Although it would be another 14 months before it was made official. Then, six more months of planning eventually brought a list of Canadian Olympic royalty to Kamloops, British Columbia – Armstrong’s hometown – to honour the newest member of the Canadian Olympic medal-winning clan.

“Thank you to the (Canadian Olympic Committee), and IAAF, for their help getting the medal back to Canada where it belongs.” 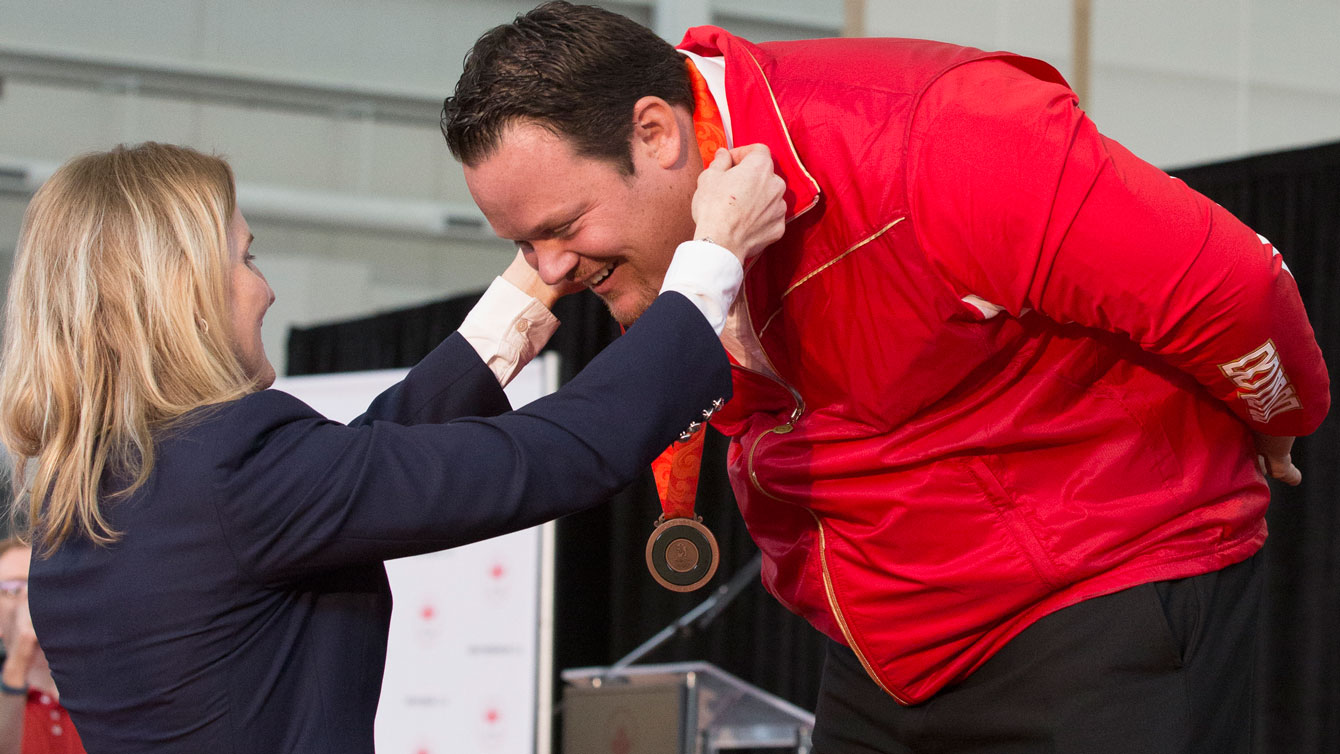 Dylan Armstrong receives his medal from Hayley Wickenheiser on behalf of the International Olympic Committee.

Together with the Armstrong family and a gorgeous track and field complex full of friends and neighbours, Hayley Wickenheiser on behalf of the International Olympic Committee put the medal around Armstrong’s neck to rapturous applause. Athletics great Abby Hoffman, representing the IAAF, placed the Olympic pin on Armstrong’s jacket.

“And finally, thank you to everyone who is here today to help me celebrate this special moment.” 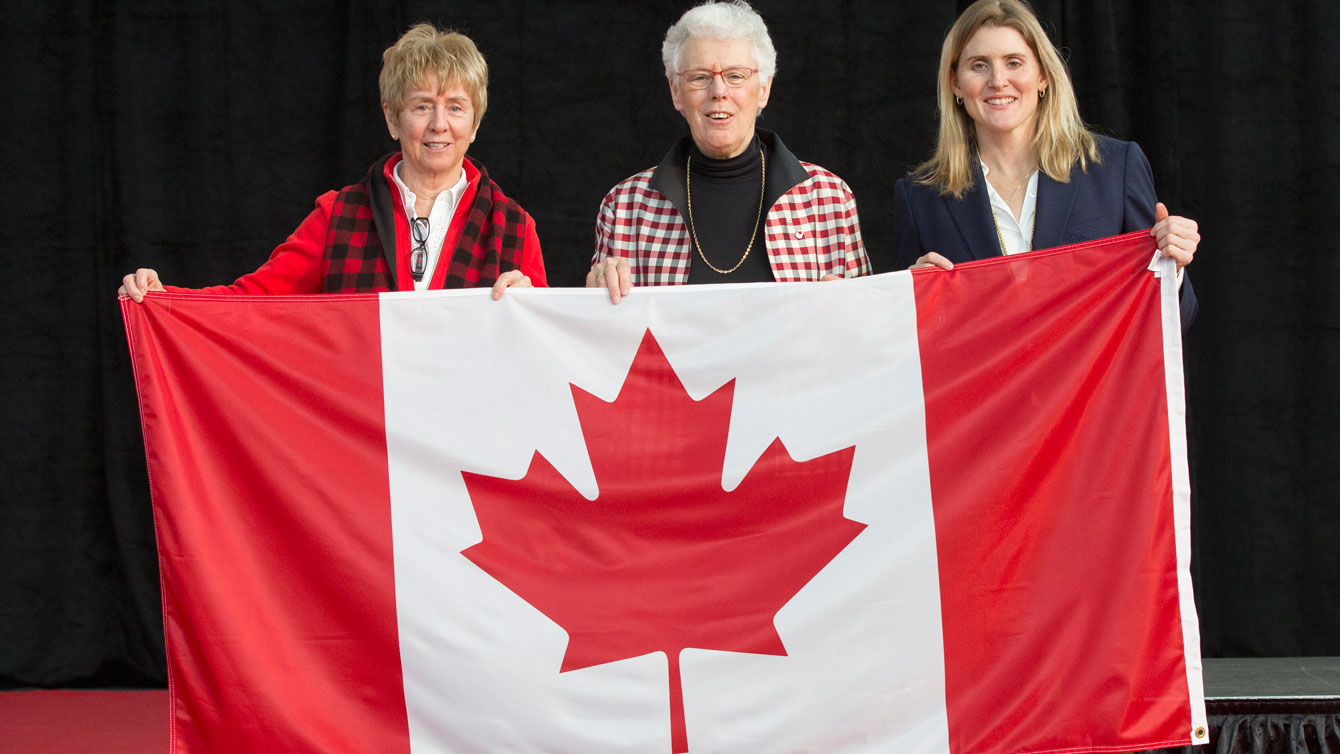 Nancy Greene (left) was the first Olympian ever to carry the maple leaf into an Olympic Games. Abby Hoffman (middle) was the first to do it on Canadian soil. Hayley Wickenheiser (right) was the most recent ‪Team Canada‬ Opening Ceremony flag bearer. All were at Dylan Armstrong’s medal ceremony, which happened to fall on the 50-year anniversary of the maple leaf flag.

A short, humble speech full of heartfelt gratitude followed from Armstrong. The local legend then spent no less than an hour shaking hands, signing autographs and posing for pictures with well wishers who have watched him grow as an athlete and a man. On this day they also got to witness justice prevail.

All quotes are from Dylan Armstrong’s speech following his medal ceremony. Watch it in full below courtesy of ViaSport of British Columbia.