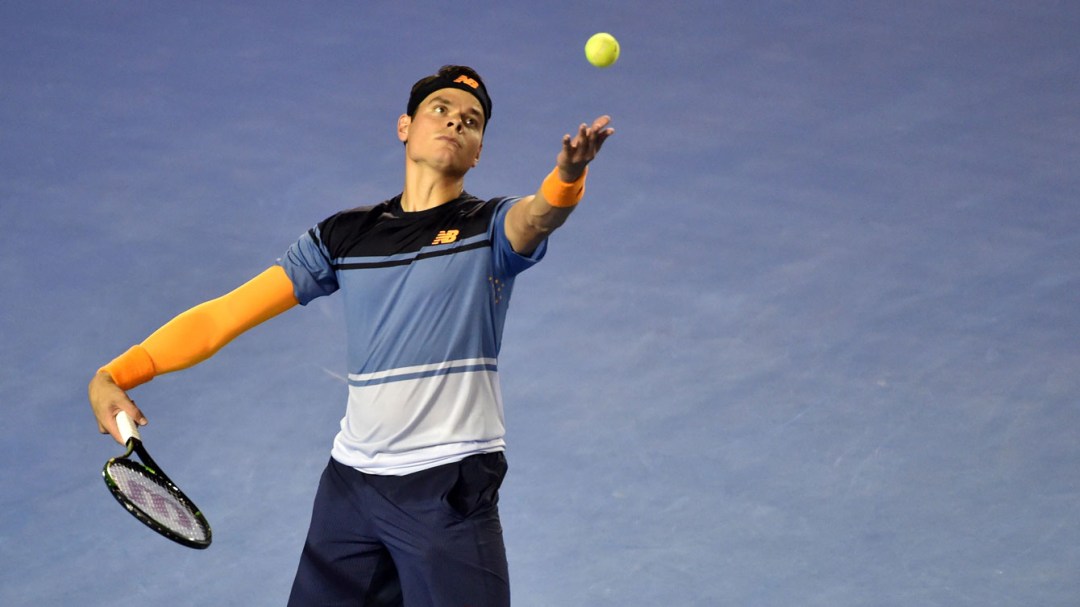 Raonic serves up a quarterfinal win at Australian Open

Taking just enough break points afforded to him by Gael Monfils, Canada’s Milos Raonic won his Wednesday match in Melbourne to reach his first semifinal at the Australian Open.

The 6-3, 3-6, 6-3, 6-4 victory over his men’s singles counterpart from France brings Raonic to his second career semifinal at a major tournament, having achieved the same feat at Wimbledon 2014.

Raonic’s win sets up a mouth-watering Friday tie against Andy Murray of Great Britain. Novak Djokovic and Roger Federer will play the other men’s singles semifinal on Thursday.

It was a typical beginning to the contest on Day 10 for Raonic, who started on serve blasting a pair of aces on his two opening shots. The first break point arrived on Monfils’ second service game, the Frenchman committing a pair of double faults to help Raonic to a 3-1 lead. The Canadian consolidated and held serve rest of the way to take a one set lead at 6-3 inside Rod Laver Arena.

Monfils provided another opening for Raonic in the second set at 2-2, when two more double faults allowed a pair of break points there for the Canadian’s taking. However, this time Monfils closed the gap, firing an ace to win the final point of the game. The Frenchman was rewarded for his resiliency, when three unforced errors and a double fault from Raonic in the next game gave Monfils his first break, later consolidated for an assertive 5-2 lead. Players held each of their next service games, Monfils battling back from another break point to win the set at 6-3 and levelling the match.

Raonic atoned for letting Monfils get away in the previous set when he jumped out to a 3-0 advantage, largely by not making a single unforced error in those games (he had 19 through the first two sets). Although mistakes crept up in the second half of the frame, Raonic was far enough ahead, efficiently winning 12 of 14 first serve points to hold rest of the way at 6-3 and grab a two-sets-to-one lead.

With Monfils serving the fifth game of the fourth set, Raonic found his path to closing out the contest. Another untimely double fault from Monfils gave Raonic an advantage at deuce, then a rally ended by a forehand volley put away at the net gave the Canadian a 3-2 lead, which he promptly consolidated on serve to pull ahead 4-2. A couple of holds later, the set and match was Raonic’s at 6-4 on what is becoming a trademark forehand volley winner.

Despite dropping a set – only his fourth this year in winning all nine of his matches – it was a fairly routine outing for Raonic. He did leave five break points on the court, but picked up the three he needed to make the difference against Monfils. Often put in a box for relying on his powerful serve, Raonic only needed 10 aces against Monfils, the Frenchman in fact, hitting four more than the Canadian in this encounter.

Head-to-head, Raonic has a good record against Murray, his next opponent and the number two seed in Melbourne. The two are even with three wins and losses apiece. Raonic and Murray met in Madrid last May, when a pinched nerve hobbled the Canadian while the Brit came out the winner.

Raonic isn’t the first Canadian to reach an Australian Open semifinals this year. Daniel Nestor, with Czech partner Radek Stepanek, will play on Thursday for a shot at the men’s doubles final in Melbourne.

Peter Polansky turned pro in 2006 and has a career high ATP World Tour ranking of 122nd, achieved in September...