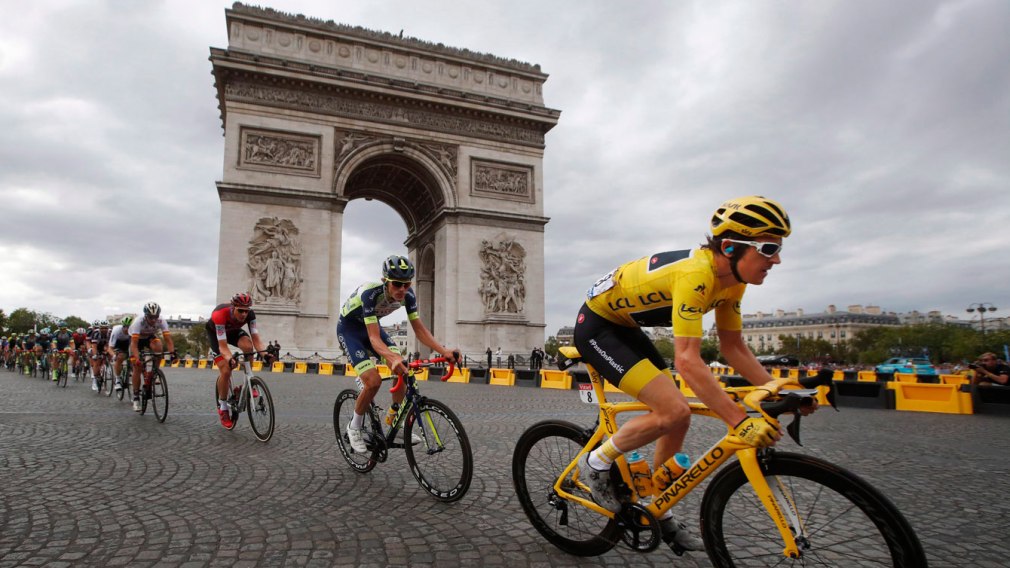 July can only mean one thing; Tour de France. This year, two Team Canada Olympians, Mike Woods and Hugo Houle, will take part with their respective teams in this legendary two-wheeled marathon.

Here is everything you need to know about le Tour and why you need to watch it at least once in your life: 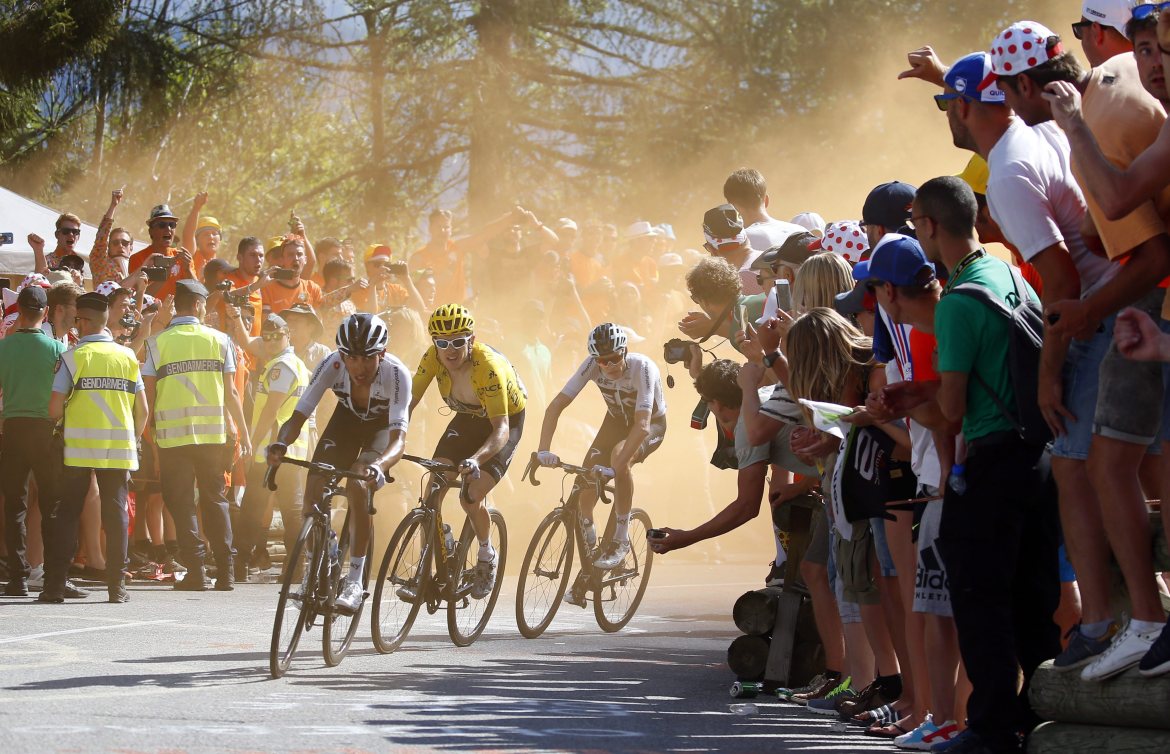 What is le Tour de France?

Le Tour de France is the most prestigious road cycling race in the world and is one of the three Grand Tours alongside the Giro d’Italia and the Vuelta d’España. Mainly held in France, with stages in neighbouring countries, the Tour counts 21 stages over 3,460 km. The 2019 edition will mark the 106th start of the Tour, or as the fans call it, “la Grande Boucle”. 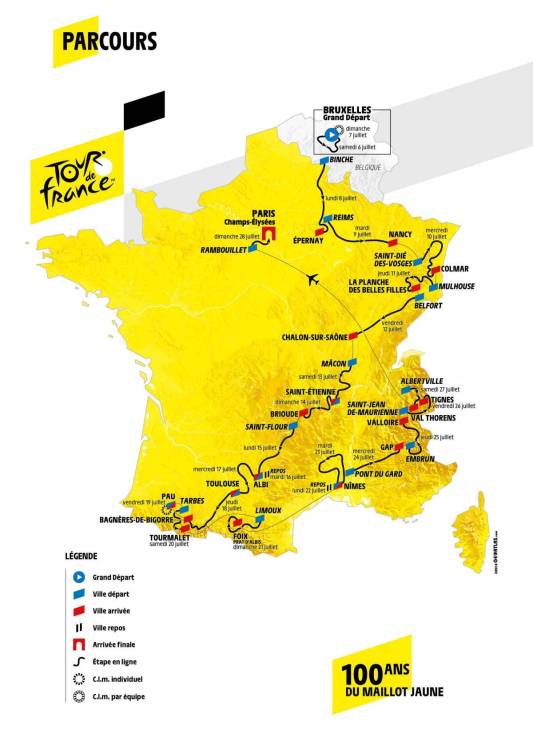 The 2019 Tour will cross two countries, Belgium and France. It will visit the three Belgian regions (Brussels Capital, Flanders and Wallonia) and 37 departments in France.

This year’s Tour de France begins with a 192 km flat stage near Brussels, Belgium, on Saturday, July 6, 2019, and will last until July 28, when the competition ends on the Champs-Élysées in Paris.

As with all races on the world circuit, the Top 18 ranked professional teams receive an invitation and in the case of the Tour de France, all teams are contractually obliged to participate.

Canada’s Mike Woods will take part in his first career Tour with the American EF Education First team, as will his compatriot Hugo Houle, who will ride for the first time on this legendary course with the Astana Pro Team from Kazakhstan. The two cyclists are the 11th and 12th Canadians to take part in le Tour de France in the history of the race. 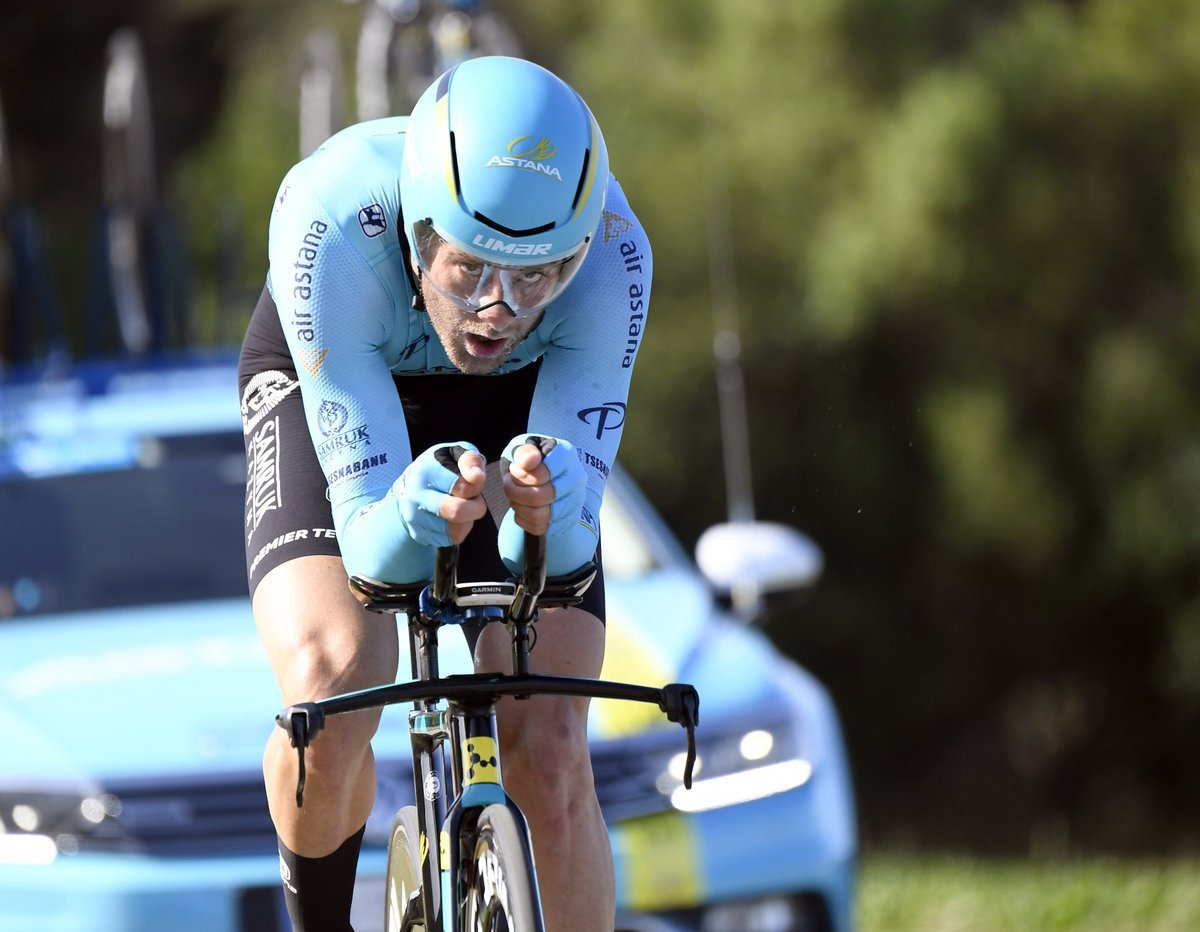 In addition to these teams, the Tour organizers offered invitations to Arkéa-Samsic, Cofidis Solutions Crédits, Total-Direct Énergie and Wanty-Groupe Gobert.

We can’t forget about the women! The women’s Tour de France has not had as rich or prolific a history as the men’s, but it is still taking place. Having changed names over the years, this race is special for Team Canada as Leah Kirchmann took third place in the competition in 2014.  Wearing the national champion jersey, she shared the podium with world champion Marianne Vos (probably the greatest female cyclist of all time).

Who wears the yellow jersey?

While historians do not seem to agree on the exact origin of the yellow jersey, it is now a tradition for the first-placed cyclist in some competitions, including le Tour de France, to wear the yellow jersey to distinguish him from the rest of the riders. 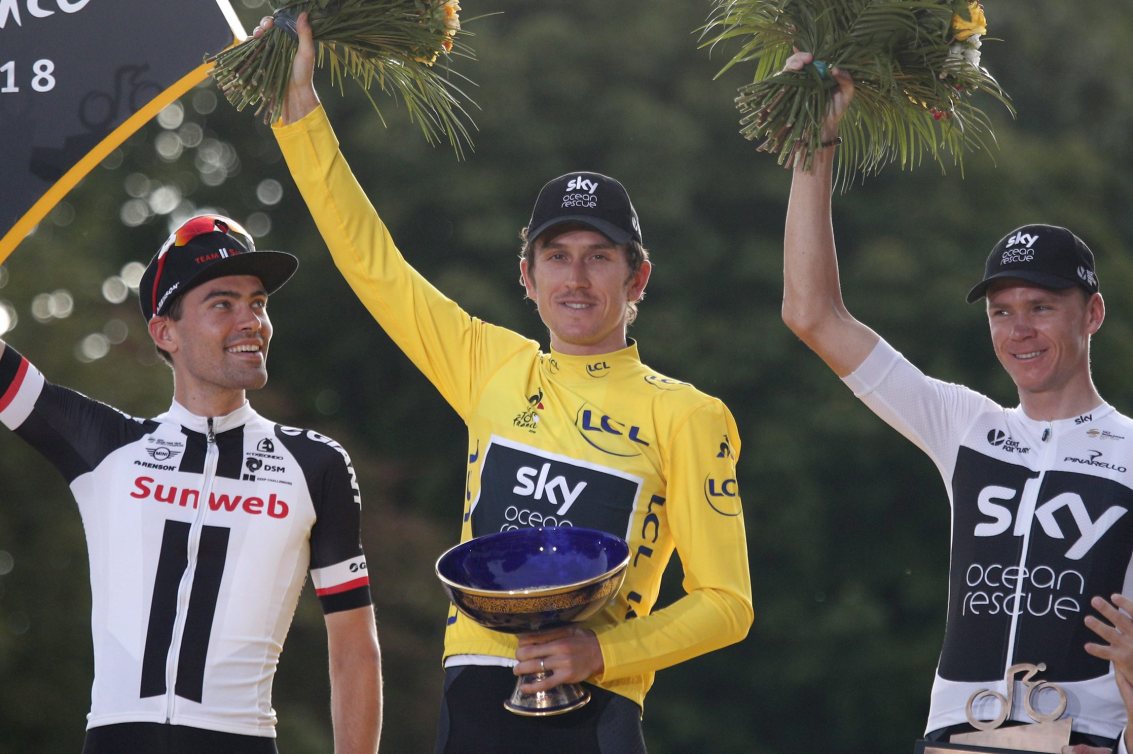 FILE – In this Sunday July 29, 2018 file picture, Tour de France winner Britain’s Geraint Thomas, wearing the overall leader’s yellow jersey, celebrates on the podium with Netherlands’ Tom Dumoulin, left, who placed second, and Britain’s Chris Froome, right, who placed third, on the Champs-Elysees avenue in Paris, France. The team said in a statement on Wednesday that police is investigating the case after the trophy disappeared during an event organized in Birmingham, where Team Sky displayed the three Grands Tours trophies won by its riders. (AP Photo/Francois Mori, File)

What does the winner of le Tour de France win?

Where can I watch le Tour de France?

Don’t miss any of the action as you watch the Tour on Sportsnet, the official broadcaster for the 2019 edition. View the schedule here.

Why should I watch le Tour de France?

In person or on TV, you must take the time once in your life to watch all the frenzy surrounding the Tour.

I experienced myself a stage of the Tour de France in 1999 when I was a child and I must tell you that I did not understand the excitement of waiting long hours on the side of a French country road to see guys on their bikes pass by. And then I understood everything. Here are three reasons why: 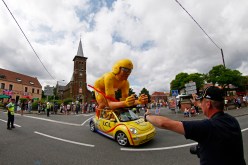 A Tour de France advertising caravan is seen during the third stage of the Tour de France cycling race in Wahagnies, northern France. Riding on the course about an hour ahead of the cyclists, the caravan’s vehicles, music and gifts are as much part of the spectacle as the race for the thousands of people lining up the Tour de France roads. (AP Photo/Michel Spingler) 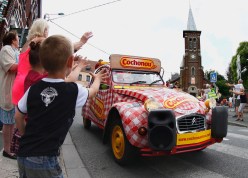 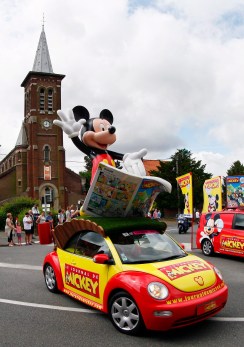 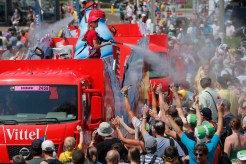 The publicity caravan sprays water on spectators as they wait for the start of the first stage of the Tour de France cycling race, an individual time trial over 13.8 kilometers (8.57 miles), with start and Finish in Utrecht, Netherlands, Saturday, July 4, 2015. (AP Photo/Christophe Ena) 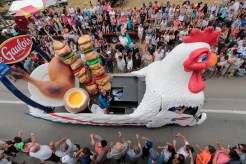 Spectators watch the publicity caravan pass prior to the start of the ninth stage of the Tour de France cycling race, a team time-trial over 28 kilometers (17.4 miles) with start in Vannes and finish in Plumelec, France, Sunday, July 12, 2015. (AP Photo/Christophe Ena)

The Tour de France advertising caravan consists of a line of vehicles that precedes the passage of cyclists. About two hours before the start of the race, the Tour Caravan passes by and distributes promotional items, much to the delight of children who are bored like I was.

The Tour has something to offer to all cycling fans. From the brutal cobblestones of northern France near Roubaix to the sunflower fields of Provence, passing through the majestic mountains of the Pyrenees and the Alps, the race has become a centre of French culture showcasing the diverse beauty of the entire country.

If there is one job I would like to have at the Tour, it would be to be a cameraman in the official helicopter. Not only do image shooters see the action better than anyone else, but they also see how far supporters can go!

Back to our epic stages, it is clear that the most emblematic stages are located in the Pyrenees and the Alps, the annual stage of Alpe d’Huez being the most famous.

Every year, tens of thousands of Dutch fans make a pilgrimage to Alpe d’Huez. They take over of one of the 21 hairpin bends of the climb known as the Dutch Corner… They often show up 3-4 days before the stage to claim their area, set up their camp, wait for the race and… drink (So they have been drunk for three days when the race arrives, cheers! 🍻)

The ultimate stage where the centre of Paris is closed for the race and overflown by the French Air Force with trails of blue, white and red smoke is really a sight to behold.

In 1999, everyone was smitten by the American Lance Armstrong, including me, as he was on his way to his first of seven Tour titles… which he lost in 2012 for the reasons we all know. There were many dramatic moments during the Tour de France history, whether it was the Coppi-Bartali rivalry in 1946, the protest led by Bernard Hinault in 1978 or Chris Froome’s sprint on foot – yes, you read right – in 2016. 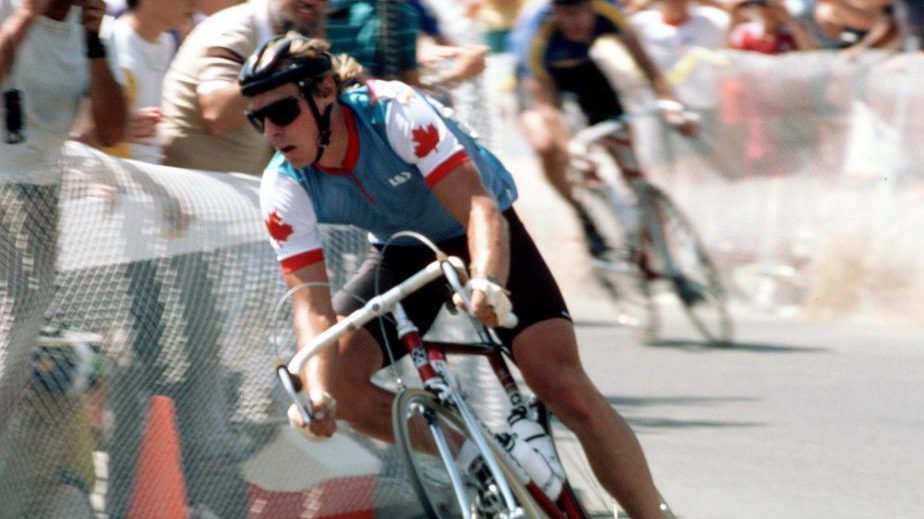 Who knows, maybe we’ll have a great Canadian moment in 2019? From the first Canadian to take part in the Tour, Pierre Gachon in 1937 to Steve Bauer‘s first stage win at the 1988 Tour, followed years lather by Svein Tuft’s fourth stage win in 2013… It would be magic if Woods or Houle added a Canadian touch to the history of the Tour.

On that note, be patient and settle in for the 2019 Tour de France, it’s well worth the wait. Bon Tour les potes!

Hugo Houle has been racing professionally on the UCI World Tour since 2013, with AG2R La Mondiale (2013-17) and Astana…